I’m tossing you a softball. Now think carefully. The choices are:

I know Americans are math challenged and need a calculator to subtract 10 from 20, but I think even a CNBC bimbo or Princeton economic professor could get this one right.

Last year there was much banter from the Wall Street shysters and Bakkan shale oil experts about the true breakeven price for shale oil not being $80 (which is the truth) but actually being as low as $58 a barrel. They were spreading this lie in order to keep idiot investors buying the stocks and bonds of these fly by night shale oil companies. 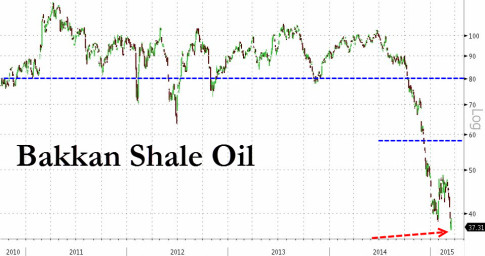 Well, we are now six months further down the line and Bakkan shale oil this morning is selling for $37 per barrel. Where are the babbling baboons of bullshit with storylines of shale oil breakeven prices of $30? I guess even corrupt lying scum can’t work up the gumption to try and convince the ignorant masses of that doozy.

Think about this for a minute. What business in their right mind would start a project that is guaranteed to lose $43 per barrel produced? How long will these small shale oil companies with gobs of junk bond debt last at these prices? The answer is easy. Not long. The bankruptcies have begun. The rig counts are collapsing at the fastest pace in history. And the number of layoffs is increasing exponentially. It’s like watching a devastating car crash in slow motion. And it has only just begun.

And as OilPrice.com’s Andrew Topf explains it’s going to get worse…

This time a year ago, the oil industry’s biggest problem was finding a way to deal with the “retirement tsunami” about to crash down on it as older oilfield workers hung up their cork boots to enjoy freedom-55. Now, with oil prices still in the doldrums, many of those same workers are lucky to be hanging onto their jobs, while others have been booted from the payroll as an ugly wave of layoffs takes hold.

One of the worst-affected areas is the Canadian oil sands, where a higher per-barrel cost of production than conventional sources has oil companies scrambling to cut capital expenditures and in several cases, put long-term projects on ice.

On Thursday one of the region’s big players, Husky Energy, announced that about 1,000 construction workers employed by a contractor at its Sunrise oilsands project, would be issued pink slips. The bad news for the workers came a day after Husky said that it had started to produce from the $3.2 billion, steam-assisted gravity drainage (SAGD) Sunrise operation, which it co-owns with BP.

The layoffs by Husky followed Suncor’s decision in January to cut 1,000 employees and Royal Dutch’s Shell’s announcement that it will shed close to 10 percent of the workforce at its Albian sands project – around 300 workers.

The Canadian Association of Oilwell Drilling Contractors, which closely tracks drilling activity, said in February that up to 23,000 jobs could be lost as the number of rigs fall. Since the price started dropping last September, about 13,000 positions in the Alberta natural resources sector, mostly oil and gas, have been eliminated, according to Statistics Canada.

The bloodletting among the oil majors and their vast web of ancillary services has of course extended to the United States – which appears to be taking far more casualties than Saudi Arabia in the battle for marketshare. In January oilfield services giant Baker Hughes said it will lay off 7,000 employees, about 11 percent of its workforce; that number was rivalled only by its competitor, Schlumberger, which let go 9,000 workers. Shell, Apache, Pemex and Halliburton are among major oil companies to issue recent pink slips to the growing army of unemployed oil workers. In the U.S., the worst pain is, not shockingly, expected to be felt in Houston. Assuming a one-third reduction in oil company capital expenditures this year and 5 percent in 2016, the hydrocarbon capital of the world could lose 75,000 jobs, in a city that has added 100,000 new positions every year since 2011, said a professor at the University of Houston.

The oil jobs nightmare is in fact spreading like a cancer. According to Swift Worldwide Resources, “the number of energy jobs cut globally has climbed well above 100,000 as once-bustling oil hubs in Scotland, Australia and Brazil, among other countries, empty out,”Bloomberg reported recently. Examples include foreign-trained engineers whose promise of employment at LNG plants in Australia have evaporated as projects get delayed; development projects halted in Brazil resulting in the closure of international schools and the relocation of workers; and 8,000 Mexican workers left without paycheques after Petroleos Mexicanos slashed contracts and purchases, Bloomberg said.

Of course, industry defenders say the oil and gas business is boom and bust by nature, and most veteran oilmen have gone through many a cyclical downturn and lived to fight another day. The question of whether or when the oil price will recover and all those laid-off workers are rehired is best left to the prognosticators. In the meantime, there is a danger in oil companies cutting too deep, according to oil and gas industry recruiters. They say firms that lay off too many workers will put pressure on older workers who may opt for early retirement. That could leave companies in the same situation as the 1980s, when an oil downturn meant few businesses hired and new graduates went into other more promising fields, leaving a serious talent gap.

“They will be very careful about reducing staff, because they’ve seen cycles like this before where commodity prices are weak for a certain period time, they lay off employees and they’re not well-positioned to get access to high-quality talent,” said Mike Rowe, vice president of exploration and production research at Tudor Pickering Holt, an energy investment and merchant bank, in a story run by CNBC on how the layoffs could come back to haunt the industry.

By the time this plays out, North Dakota, Texas, Oklahoma, and parts of Pennsylvania will be in smoldering ruins of unemployment and dramatically reduced tax revenues. These energy jobs were high paying. Maybe they can get themselves an Obama job – waiter, bartender, hotel room cleaner, social worker, or government drone.