Earlier this month, the BoJ surveyed 40 dealers and discovered something shocking: buying the entirety of JGB gross issuance has had a rather dramatic effect on liquidity. In fact, two thirds of the firms who participated reported having “some or a lot” of problems and described bid-asks as “not very tight.” Today, an internal report from the central bank indicates officials are slowly coming to accept the fact that their actions have consequences although as you can see from the following, the fact that the BoJ is literally buying all of the bonds is still low on the list of factors the central bank figures might be negatively affecting liquidity…

Impact on market prices from a single trade or breadth of orders in futures and rates on repurchase agreements are among indicators suggesting liquidity has fallen since the autumn of 2014: BOJ report

Liquidity may have been affected by sharp drop in long-term yields; short- and medium-term yields becoming negative at about the same time; structural changes in markets; BOJ bond buying; and change in financial regulations, according to BOJ report.

We also recently noted that Japan isn’t particularly enamored with the idea that stock prices can sometimes decline and so in order to correct the problem, the BoJ has stepped in two thirds of the time equity markets open lower and brought its balance sheet to bear on any sign of selling pressure thus underwriting an equity rally:

Since 2010, The Bank of Japan has ‘openly’ – no conspiracy theory here – been a buyer of Japanese stock ETFs. Their bravado increased as the years passed and Abe pressured them from their independence to ‘show’ that his policies were working to the point that in September 2014, The BoJ bought a record amount of Japanese stock ETFs taking its holdings to over 1.5% of the entire market cap, surpassing Nippon Life as the largest individual holder of Japanese stocks.

As it turns out, the central bank may now run into the same inconvenience in its efforts to control the stock market that it encountered on the way to monopolizing the JGB market: there’s only so much out there to buy. Here’s more from Bloomberg:

You read that correctly — the Bank of Japan will own the entire Japanese ETF market within about 30 months. So with all of the JGBs marked for purchase and with all of the ETFs exhausted, there’s only one place to go next…

Given this outlook, BOJ will probably start to purchase individual stocks that comprise JPX-Nikkei Index 400, Kazuhiko Ogata, chief economist for Japan at Credit Agricole in Tokyo, said in an interview on March 18. “Buying stocks would amplify risk-on sentiment in markets, indirectly accelerating yen weakness”; Ogata sees USD/JPY at 130 by year-end, vs 120.22 today.

While this might seem problematic from a moral hazard/sanity check prospective, there’s at least one person out there who isn’t concerned…

…and while we’re not sure we agree with that assessment, here’s one point on which we do concur: 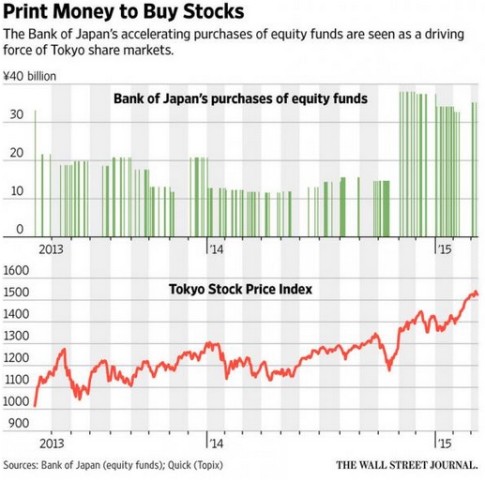