Greek short-term default risk jumped over 300bps today putting the odds of a restructuring at 50-50 within the next year as the warnings we issued last week with regard Greece’s imminent default on its IMF loan loom. Seeking to reassure its lenders (and avoid yet more capital flight), Reuters reports the Greek government said it was “exploring solutions,” including delaying payments to suppliers or try to raise up to 3 billion euros by borrowing from state entities such as pension funds.

As Reuters reports,Athens is running out of options to fund itself despite striking a deal with the euro zone in February to extend its bailout by four months. Faced with a steep fall in revenues, it is expected to run out of cash by the end of March, possibly sooner.

“The Greek government has been exploring solutions … to ensure there won’t be a single problem with repaying the IMF loan, or its funding obligations in March,” Government Spokesman Gabriel Sakellaridis told Greek radio.

So far, Athens’s other funding options have stumbled upon problems. Transferring 1.9 billion euros worth of profits the European Central Bank made on buying Greek bonds will not be allowed until Greece has completed promised reforms.

Another option is the issuance of additional Treasury bills, but Athens’s EU/IMF lenders have set a 15 billion euro cap on such debt and it has already been reached.

On Wednesday, Athens will go ahead with a regular six-month T-bill auction of 875 million euros to refinance a maturing issue, in a sale that will be closely watched as the government faces a possible funding gap.

When asked if Greece could cover its liquidity needs without issuing more T-bills or receiving the ECB profits, a finance ministry official said Athens had “alternatives”, without specifying the options at hand.

Athens could save money by delaying payments to suppliers or try to raise up to 3 billion euros by borrowing from state entities such as pension funds though the government may already have used up part of this, a source has told Reuters.

Of course, this public pension fund ‘cash’ will all be repaid when Greece returns to growth and pays down its debt…

“The fears about a possible default for Greece are certainly not completely off the table,” Gerhard Schwarz, head of equity strategy at Baader Bank in Munich, said. 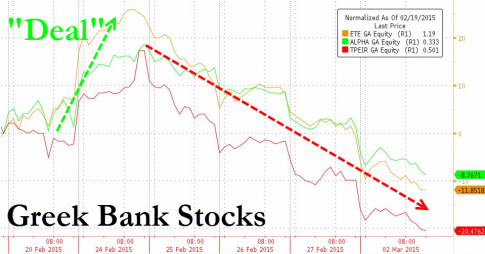