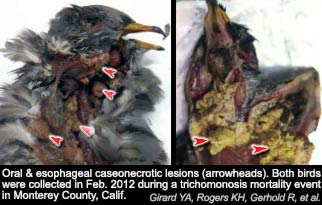 San Luis Obispo (SLO) Tribune, Feb 18, 2015 (emphasis added): I am a volunteer at Pacific Wildlife Care… there is an ongoing problem throughout California with band-tailed pigeons that have grown sick or are dying of Trichomoniasis – a protozoan that causes lesions to form in the throat and nasal passages.

San Francisco Chronicle, Feb 2, 2015: Mass pigeon deaths alarm biologists — An alarming increase in the number of dead and dying band-tailed pigeons along the California coast… apparent victims of a parasite… The sudden increase in mortality is disturbing, [Krysta Rogers, Calif. Dept. of Fish & Wildlife] said… “[It] is very concerning… Right now, it’s really hard to estimate mortality because… if there are deaths in remote locations, we’re not getting reports.”… [The parasite] lives in the mouth and throat of infected birds, causing lesions in the mouth or esophagus that eventually block the passage of food. Infected birds die from starvation or suffocation.

L.A. Times, Feb 3, 2015: The parasite causes lesions in the mouth and throat of infected birds… from the Bay Area to San Diego… state veterinarians are also concerned about the risk of spillover to hawks, falcons and owls.

Noozhawk (Santa Barbara), Feb 8, 2015: Thousands… have been discovered since mid-December… scientists have been investigating the large-scale deaths of the birds… It’s unclear what is causing the parasite… more may have perished without having been reported.

Bay Nature, Feb 9, 2015: Trichomonas gallinae [is] a single-celled microscopic protozoan that creates nasty, “cheese-like” lesions in the beak that eventually block the bird’s airway and esophagus… In fact, we’re in the middle of an outbreak right now… [Calif. Dept. of Fish & Wildlife] and UC Davis are applying genetic testing methods to die-offs from these large scale mortality events [and] they recently found a new strain of trichomonosis affecting the population… the birds are being hit by multiple variations of pathogens at once. Scientists don’t know for sure what triggers an outbreak of avian trichomonosis.

UC Davis, Jul 2, 2014: A new pathogen has been discovered by scientists investigating major die-offs of pigeons… The die-offs occurred during multiple epidemics [of this] emerging and potentially fatal disease that creates severe lesions… preventing the bird from eating or drinking [or] leading to suffocation. The disease may date back to when dinosaurs roamed the earth… “The same parasite species that killed band-tailed pigeons during the outbreaks were also killing the birds when there weren’t outbreaks,” said lead author Yvette Girard… “This indicates there may be other factors at play in the die-offs.” “We are now investigating what triggers these die-offs…” said principal investigator Christine Johnson… Between winter 2011 and spring 2012, there were eight mortality events… “we expected to find a single, highly virulent species of Trichomonas in birds sampled at outbreaks,” Girard said. “Having two species killing birds at these large-scale mortality events is surprising.”