It has been a disturbing week for Japan, not due to any recent economic calamity resulting from Abenomics, but because for the first time since the catastrophic 2011 earthquake, the nation has been rocked with a series of ever stronger tremors, with two 6.0+ stronger quakes recorded in just the past 2 days: 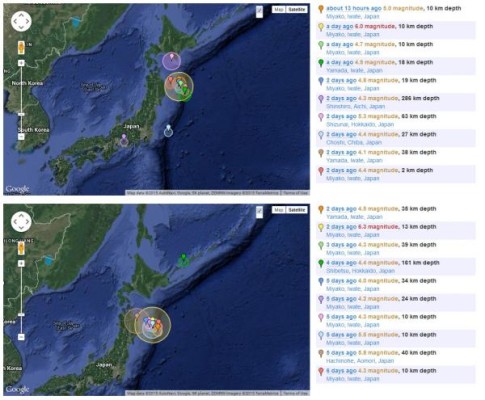 The quakes come at an awkward time, just a few short months before Japan’s government aims to restart its first nuclear reactor by around June, following the Fukushima devastation.

While it is unclear if it is directly related to the recent surge in tectonic activity, overnight another radioactive water leak in the sea was detected at the crippled Fukushima nuclear plant, the facility’s operator TEPCO announced. Contamination levels in the gutter reportedly spiked up 70 times over regular readings.

The levels of contamination were between 50 and 70 times higher than Fukushima’s already elevated radioactive status, and were detected at about 10 am local time (1.00 am GMT), AFP reported. After the discovery, the gutter was blocked to prevent leaks to the Pacific Ocean.

As RT adds, throughout Sunday, contamination levels fell, but still measured 10 to 20 times more than prior to the leak. “We are currently monitoring the sensors at the gutter and seeing the trend,” a company spokesman said.

He did not specify the cause of the leak.

Tepco being Tepco, it decided to be extra generous with the lives and safety of any citizens around the blast site, and in yet another attempt to avoid panic, reported the latest batch of radioactive propaganda:

No contaminated water leakage has been confirmed at Fukushima Daiichi NPS; however,radioactive data has temporary risen at the drainage.

There was one problem what that euphemism:

What @TEPCO_English tweets on #Fukushima-1 did not say is sensors detected levels 50 to 70x > already-high radioactive level there. #nuclear

The euphemisms continue: “It has proved difficult for TEPCO to deal with plant decommissioning. Postponed deadlines and alarming incidents occur regularly at the facility. Earlier this week, the UN nuclear watchdog (IAEA) said Japan had made significant progress, but there is still a radioactive threat, and a “very complex” scenario at Fukushima.”

So while Tepco not only has no idea how to proceed with the toxic cleanup at the Fukushima site 4 years after the explosion having scrapped its idiotic “ice sarcophagus” idea a year ago, and continues to scramble to push the illusion that it is on top of the situation – one which any earthquake threatens to unravel with devastating results – Japan is already preparing for its next epic catastrophe, when it proceeds to launch even more nuclear power plants in the coming months. Then again, once Japan suffers the next and final Fukushima-type event and the endgame for doomed nation arrives, at least the government can “blame nature” for finally destroying the country, deflecting attention from years and decades of failed economic policies.