Greenspan recently joined veteran resource analyst Brien Lundin at the New Orleans Investment Conference to share some of his thoughts. According to Lundin, the former Fed chairman made it clear that the central bank is facing a serious problem and one that will have significant ramifications in the future.

We asked him where he thought the gold price will be in five years and he said “measurably higher.”

In private conversation I asked him about the outstanding debts… and that the debt load in the U.S. had gotten so great that there has to be some monetary depreciation. Specially he said that the era of quantitative easing and zero-interest rate policies by the Fed… we really cannot exit this without some significant market event… By that I interpret it being either a stock market crash or a prolonged recession, which would then engender another round of monetary reflation by the Fed.

He thinks something big is going to happen that we can’t get out of this era of money printing without some repercussions – and pretty severe ones – that gold will benefit from.

If we are in fact staring a major market event in the face as Alan Greenspan proposes then wealth preservation should be a key tenet of any preparedness strategy going forward. Greenspan himself, somewhat ironically, was a gold bug and proponent of sound money prior to his appointment as the chairman of the Fed. And though he didn’t discuss it much during his tenure, he is now actively saying that we can expect to see gold markedly higher within the next five years.

His assessment is likely based on concerns over the U.S. dollar which will, as Lundin notes, more than likely suffer a currency devaluation at some point in the future.

The end has to come at some point…  If you look at a chart of the U.S. dollar index it has gone nearly parabolic in the last few months… In any market that is so one sided, that is accelerating so rapidly, that trend will end… it will most likely end in a fairly violent fashion.

And if gold rises as a result, so too will other resource assets in the energy and mining sectors. What it boils down to is that the assets that are necessary to keep our system operating will always have value, and that is especially true in a situation where the U.S. dollar happens to be crashing. Uranium , for example, powers one in five American homes, which means that it will always be a necessary resource, regardless of what the dollar does or doesn’t do. Lundin’s assessment is echoed by Uranium Energy Corp CEO Amir Adnani, who recently said we may well see a “resurgence” in the price of this and natural resources like gold.

The same can be said for oil and agriculture resources.

They will always have value, regardless of whether the dollar is strong or violently collapses under its own weight.

Thus, when we consider ways to preserve wealth and insulate ourselves from the coming destruction of our currency one must consider holding physical assets. For some that means stockpiling food and other supplies in anticipation of Greenspan’s market event that could adversely affect credit flows and delivery of essential goods. For others who may currently hold stocks, U.S. Treasurys, or cash, diversifying your portfolio with well managed resource-based companies will not only preserve wealth during currency volatility, but build it as the value of real, physical assets rises.

The man who is essentially the architect responsible for domestic monetary policy under four U.S. Presidents has now said that a significant market event will take place when the Fed is eventually forced to exit their monetary easing and zero-interest rate policies.

Are you prepared for that day? 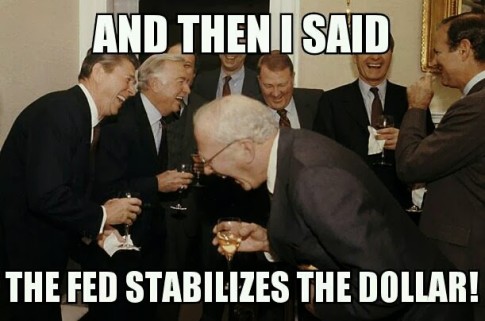 2 thoughts on “Alan Greenspan Warns: There Will Be a ‘Significant Market Event … Something Big Is Going To Happen’”