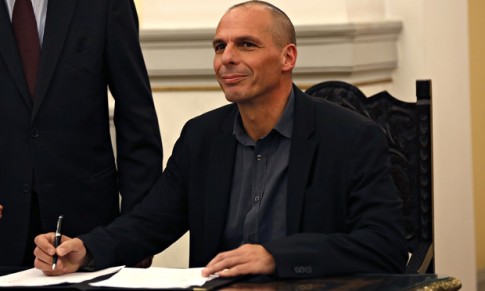 Yesterday, when we reported on the FT’s take of the supposed Greek flip-flop, we said that contrary to the official interpretation of Greece ending its demands for a hard debt write-down and replacing it with a proposal for a debt exchange, we stated that “the Greeks themselves realize that this proposal is nothing but a debt haircut under a different name, but hope that Europe will pull an Obamacare and bet on the “stupidity of their own taxpayers” to let it slide without anyone noticing. To wit: “[Varoufakis] said his proposal for a debt swap would be a form of “smart debt engineering” that would avoid the need to use a term such as a debt “haircut”, politically unacceptable in Germany and other creditor countries because it sounds to taxpayers like an outright loss.”

For the benefit of the kneejerk algos we even highlighted the key section, noting that all Varoufakis had done, was engage in semantics for the “benefit” of German taxpayers:

A haircut that “avoids the need for such a term” pic.twitter.com/XVeJRYu2Q9

And not only was the Greet gambit merely a verbal paliation, the proposed alternative was in itself a non-starter, “when one considers what we explained a long time ago: namely that a distressed debt exchange, such as what Greece is proposing, is what the rating agencies have always deemed an Event of Default, and thus something which the ECB will never agree with as it once again impairs an ECB-held security” as well as is seen as ECB monetary financing of a sovereign state (the ECB does that with QE as well, but we’ll let that slide for the time being).

This was confirmed moments ago by David Schnautz, strategist at Commerzbank who said that “the starting point of Greek negotiations on debt restructuring doesn’t look very promising” adding that “ECB, at least directly, won’t be able to swap its holdings of Greek bonds into other maturities due to the ban of monetary financing. The Timeline also doesn’t look very convincing, as asking or rather leaning on ECB for bridge-financing until June/July also probably borders on the ban of monetary financing.”

We bring all this up because less than a day after the FT report sent futures soaring and has been responsible for the jump in European stocks this morning, the Greek finance minister made it quite clear that, as has been happening on pretty much every day since his ascent to power, he has been misinterpreted and that as Bloomberg noted a little over na hour ago, “there has been no “U-turn” on the Greek debt position, adding that “Our promise is solid, debt will be rendered sustainable even if haircut replaced with euphemisms, swaps” Greece’s Finance Minister Yanis Varoufakis comments in Twitter post.

@PaulGambles2 Our promise = solid. Debt will be rendered sustainable, even if we replace haircut with euphemisms & swaps. No U-turn!

Euphemisms being the key word, because he just confirmed all he was doing was engaging in verbal acrobatics.

In other words, precisely what we said yesterday: no change in the Greek position at all, and certainly not yet because the last thing the Greek population is to realize that they replaced one European muppet government with another within days of the “hope for change” election.

The local press confirmed as much:

The government’s firm position is that the Greek debt is not sustainable and that is the reason why its write-off is required, government spokesman Gavriil Sakellaridis on Tuesday told ANT1 TV.

Sakellaridis stressed that the government has not changed its stance, which may have disappointed some people.

He underlined that the write-off can occur in several technical methods and one of them is “the technical method presented by (Finance Minister Yanis) Varoufakis to British investors”. However, he said, the government is concerned with rendering the debt sustainable, to help the Greek society breathe.

Nonetheless, all this took place only after Varoufakis was seen as backing off not only internationally, but in his native country. From Reuters:

Greek bond yields fell sharply on Tuesday as the new government in Athens appeared to soften its stance on a debt writedown with proposals for a new debt swap.

Meeting investors in London on Monday, Finance Minister Yanis Varoufakis proposed ending a standoff with creditors by swapping the debt for growth-linked bonds, and reassured private investors that they would not face losses.

While Varoufakis later issued a statement saying that his comments had been misinterpreted, he was widely reported in Greek media to be backing down from the anti-austerity government’s plan to reduce their debt.

The bottom line is that Varoufakis has just been introduced to the modern media’s version of broken telephone where attempts at diplomacy are immediately taken as a sign of weakness, and misstated to impact risk levels around the globe (higher naturally) which – after the past 5 years of flashing red headlines at key market inflection points – should have been all too clear: namely that by now the “independent” media merely serves not only its corporate advertising masters but their stock prices as well.

As for Varoufakis, perhaps he can be a little more careful to avoid having to explain and re-explain every single statement: granted, it is clear to most that he is simply doing everything in his power to avoid a bank run ahead of the February 28 D-Day and thus playing as much as possible for both sides, but he must also try to stick to Syriza’s party program which is what got him elected in the first place. How he resolves the two clearly irreconcilable positions, will be the biggest problem.

1 thought on “Greece FinMin: “No U-Turn” In Our Position; “Write-Off Can Occur In Several Methods” Spokesman Adds”