After first falling ill  and being hospitalized in December, Saudi Arabia officials have announced:

As we noted previously when considering this possibility, “a new King can do (almost) anything he wants, including changing oil policy.” 79-year-old Crown Prince Salman has been named succesor (and has his own health issues). Oil prices popped around 80c on the news. 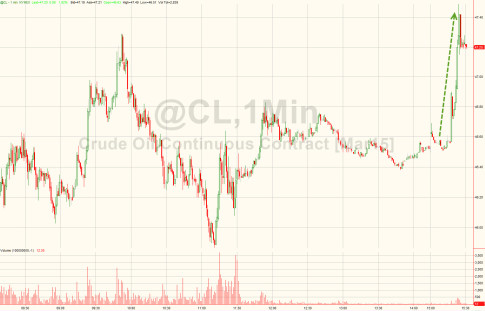 As we detailed before, Abdullah’s 79-year-old half-brother has his own health issues and leaves larger questions over the line of succession in one of the world’s most important oil producers remain unanswered.

In his annual “state-of-the-kingdom” address on Jan. 6, Saudi Arabia’s King Abdullah hoped to reassure the world that his country is prepared to absorb the economic shock of plummeting oil prices and to deal with the worsening conflict in its two neighbors, Iraq and Yemen. The message might have been more effective had the 90 year-old king delivered it personally, but Abdullah has been hospitalized since Dec. 31 for pneumonia.

Instead, Crown Prince Salman delivered the speech on the king’s behalf. That image — of an aging heir with his own health troubles standing in for a nonagenarian king — did little to address concerns about whether Abdullah is still fit to lead. Larger questions over the line of succession in one of the world’s most important oil producers remain unanswered.

The 79-year-old Salman, a half brother of the king and his designated successor, has taken on a larger public role in recent months, standing in for Abdullah at a summit meeting of Persian Gulf leaders in Qatar last month. But Salman himself is in poor health, and reportedly suffers from dementia. If Abdullah dies or is incapacitated, and Salman ascends to the throne, he might not be king for long. It’s also unclear who Salman would designate as his crown prince — and that crucial decision could destabilize the royal family.

Prince Muqrin, 69, who has served as head of Saudi intelligence and in other senior positions, was installed last year by Abdullah into the newly created post of deputy crown prince, making him second-in-line to the throne. But any new king has the right to choose his own crown prince. If Muqrin is passed over by Salman, that could set off a succession battle within the House of Saud at a time of regional crisis and instability in the global oil markets.

Beyond Salman’s expected ascension to the throne, the Saud dynasty faces a larger challenge over succession within its system of hereditary rule. The kingdom was founded in 1932 by Abdulaziz al-Saud, and he left behind a system where the throne is passed from older son to younger son (the king had 35 surviving sons when he died in 1953). With the old generation of Abdulaziz’s sons dying off or passing into senescence, the kingdom has no clear plan to hand power to the “new” generation of royals — Abdulaziz’s grandsons, of which there are at least 30 who could be in line for the throne.

Muqrin is the youngest surviving son of Abdulaziz who is still in the running for the throne (he has several older siblings who have been passed over). If Muqrin becomes king, he would have to appoint a crown prince from the third generation of royals. Muqrin does not have strong enough support within the royal family to appoint one of his sons to the post. One theory is that Abdullah positioned Muqrin as second-in-line so that he would be beholden to Abdullah’s sons, one of whom could become king once the generational shift takes place.

Aside from the king’s illness and questions over succession, Saudi Arabia is faced with a series of regional and economic threats.

Most prominently, the kingdom must cope with plunging oil prices. On Jan. 7, Brent crude, the international benchmark, fell below $50 a barrel for the first time since May 2009 — a drop caused in part by Saudi’s refusal to cut high production levels. At the last OPEC meeting in late November, the Saudis led the charge to prevent the cartel from cutting production, which would have driven prices up. Instead, the kingdom is trying to gain more control over the global market, and to drive out U.S. shale oil, which requires higher prices to remain competitive.

So far, Saudi leaders have been able to withstand the economic shock by increasing oil production to make up for falling prices, or by accessing some of the kingdom’s $750 billion stashed in foreign reserves. But those are not long-term solutions.

The other challenge for Abdullah’s successor will be containing Iran, the kingdom’s regional rival. Saudi Arabia is engaged in proxy battles with Iran in several arenas: Syria, Iraq, Lebanon and Yemen. The kingdom is using oil as a weapon to punish Iran, and Russia, for their support of Bashar al-Assad’s regime in Syria. Facing Western sanctions and economic isolation, the Iranian regime is dependent on oil remaining at $100 a barrel or more to meet its budget commitments.

The proxy war has played out most intensely in Syria and Iraq. After the American invasion of Iraq in 2003, neighboring Sunni regimes backed Sunni militants, while Iran supported the Shi’ite-led government and Shi’ite militias. When various Middle Eastern regimes realized that the United States would — in their view — lose its war in Iraq, they began maneuvering to protect their interests and to gain something out of the American withdrawal. Saudi Arabia, which saw Iraq as a bulwark against Iranian influence, tried to destabilize the Shi’ite-led government in Baghdad.

The Saud dynasty views itself as the rightful leader of the Muslim world, but Iran has challenged that leadership for several decades. Although Saudi Arabia has a Sunni majority, its rulers fear Iran’s potential influence over a sizable, and sometimes-restive, Shi’ite population concentrated in the kingdom’s oil-rich Eastern Province.

Any new leader is unlikely to change the larger contours of Saudi foreign policy — or the kingdom’s use of oil to enforce its interests and try to keep Iran at bay. But the new king and his inner circle will face decisions on succession that could reshape the ruling family and the monarchy’s future for generations to come.

But, given the almost plenipotentiary powers of the King  (see article 44 of the Basic Law), Prince Salman could realistically decide to do almost anything he wants if he deems it in the best interests of Saudi Arabia.

This includes matters of spending, where significant sums are likely to be spent on succession to ensure it goes smoothly and the social contract in Saudi Arabia is maintained and, more pertinently for global markets, on oil.

In the oil market Saudi Minister of Petroleum and Mineral Resources Ali al-Naimi has in recent weeks, with the support of King Abdullah, emphasized a shift in Saudi Arabian policy to not cut production and allow the market to determine where the oil price should go, even if it means oil falling further from here.

In our opinion, this is not another step in Saudi Arabia “flooding the market” for political reasons as a look at collapsing Saudi exports and premium seasonal differential prices shows, but rather them captalising on a scenario caused by structural factors causing the oil price to fall to try to take out significant amounts of oil investment and ensure a higher price in the future as other producers can no longer rely on a “Saudi put” to stabilize oil prices on the downside.

They have significant flexibility in their budget should they choose as we outlined here: http://www.ecstrat.com/research/balancing-budgets/ and there are a number of measures they could take (eliminating subsidies, raising short-term debt for more independent monetary policy) to weather the storm and improve the economy long-term.

However, oil prices are now at levels that cause real concern on the streets of Saudi Arabia, with the prospect of succession the icing on top that has caused retail investors to take the market down another leg.

This policy may not make it through a succession period, where public support and good will is essential, particularly as it has nearly been 20 years since the last change.

The new regent could decide to keep existing policy, change it completely or anything he decides. Similarly he has free reign to realign Saudi Arabia’s foreign policy as he wishes, which is a discussion for another time and place, but could have significant regional impacts.

This uncertainty should normally increase oil prices, but instead we see them down again today, just as Libyan civil war over resource control (as discussed here: http://bit.ly/ecstrat4, p 13) where production looks to be back at year lows of 200kbpd versus the 900kbpd that apparently kicked off this rout, actually saw prices fall again.

It seems that we are in a complete capitulation period now in oil, as the sharp decrease in CTFC in the last report shows and with producers scrambling to try to make up for revenue shortfalls by selling any stock they can now they feel they can no longer rely on the GCC, increasing flow to the market and keeping the curve in backwardation. Consumer demand is elastic, but not instantaneous (they don’t keep spare tankers for storage being mostly just in time), leading to a perilous period of dead space.

Given the lack of availability of credit for anything oil related unless you’re BP, this may continue for a period, but the lack of investment and potential shifts in the Middle East over the next year, coupled with the recent rise in long-dated oil back towards $80 augur for higher prices into 2016 unless we see a significant slowdown in China next year as JP expects, in which case the path will be more painful (JP sees $60 as the new normal for oil, a level he predicted a few years ago)

The Saudi Tadawul stock exchange is likely to stay under pressure, but we have previously seen intervention in the market if it falls too far, something that is likely to be repeated.

With a likely opening to foreign investors in April, the focus must be on “value” stocks above all else, with oil names providing the beta despite their curious earnings profile as unlike global energy names their feedstock is heavily subsidized, so it’s mostly a question of how much profit they will make versus swings from losses to profits.