Starting on January 1, 2015, a one year-delayed component of Obamacare kicks in: according to the health care law, businesses that employ at least 100 full-time workers — or full-time equivalents, including part-time workers — must offer health benefits to at least 70% of those working at least 30 hours a week by Thursday, or pay a penalty. This will expand to by next year, when companies will have to provide insurance to 95% of their workers, and firms with 50 to 99 employees must offer coverage as well. As a result, and as even the USA Today reports, “many businesses in low-wage industries have hired more part-time workers and cut the hours of full-timers recently to soften the impact of new health law requirements that take effect Thursday.”

Businesses in low-wage sectors, such as restaurants, retail and warehousing, are feeling bigger effects because health insurance represents an outsize share of their total employee costs, says Rob Wilson, head of Employco, a human resources outsourcing firm. Many of those with just fewer than 100 staffers have hired more part-timers in recent months, while those with at least 100 are reducing the hours of existing employees, he says.

Michelle Neblett, senior director of labor and workforce policy for the National Restaurant Association, says many restaurants are being more cautious about boosting the workweek of part-timers to 30 hours or more, doling out such increases to reward top performers.

Those strategies have not had a noticeable impact on the labor market. Monthly job growth has averaged 240,000 this year, up from 194,000 in 2013. And full-time employment has increased at about twice the rate of part-time payrolls, Labor Department figures show.

Still, the number of part-time workers who say they’d prefer full-time jobs has remained stubbornly high. That can at least partly be traced to the inclination of the restaurant, retail and hotel industries to hire more part-time workers to sidestep the ACA mandate, Royal Bank of Scotland wrote in a recent report.

Of course, the reason why the BLS has not yet revealed the reality of the shifting US labor force, and why there is virtually no real wage growth across the US since the Lehman bankruptcy, is that the BLS simply backs into statistically goal-seeked results, using seasonal and statistical (birth/death) adjustments to smooth a trendline to beat a monthly bogey used by algos to bid stocks higher. Meanwhile, the reality at the micro level, is that increasingly more Americans are seeing their work status transformed from full-time to part-time status, earning less in the process, having no healthcare and retirement benefits and virtually no job security.

As a result, starting this year, some 19 states just increased their minimum wage threshold, with 3 more states due to follow later in 2015. This takes place at the state level because for numerous reasons, there simply wan’t enough of a consensus to pass this at the Federal level. The Daily Signal has the details:

In three states—Arkansas, Nebraska and South Dakota—voters approved ballot measures in November to increase the minimum wage, effective Jan. 1, according to the National Conference of State Legislatures.

Alaska voters passed an initiative raising the minimum wage in the state to begin Jan. 1. But the pay increase isn’t effective until 90 days after the election results are certified, Feb. 24.

Among states raising the minimum wage, Washington state will boast the highest at $9.47 an hour–but only until July 1, when the District of Columbia will have the highest in the nation at $10.50 an hour.

These are the states in question: 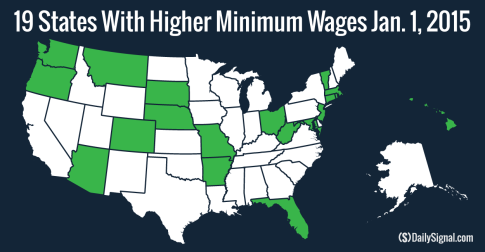 So in the grand scheme of this this should be net neutral: more part-time jobs offset by higher wages, not too bad right? Wrong.

For one thing, For according to a recent UCSD study, for three years, researchers followed low-income workers residing in states that saw wage hikes and those that did not. The study found that minimum wage hikes had negative impacts on employment, income and income growth. In other words, the probability of part-, and full-time workers to get fired rises even more as a result of an artificial push to the wage/labor supply-demand curve.

In fact, while one can applaud the attempt to boost standards of living, one can be certain that the only thing the media will be focusing on in 2015 will be the “unintended consequences” of this action:

“Minimum wage supporters have good intentions, but those good intentions cannot repeal the law of unintended consequences,” James Sherk, an expert in labor economics at The Heritage Foundation, told The Daily Signal. He added: “Minimum-wage increases reduce the total earnings of low-wage workers — the higher pay for some workers gets completely offset by the nonexistent pay of those no longer employed.”

In its study, UCSD researchers found that after minimum-wage increases, the national employment-to-population ratio decreased by 0.7 percent points between December 2006 and December 2012.

And then there are rising prices. As shown previously, just the adverse impact to the bottom line already led to increases in consumer prices across various restaurants in the US. 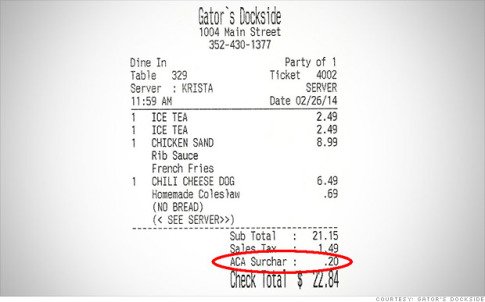 That’s just the beginning. As small and medium-businesses struggle across America to make ends meet, it is the big businesses that have all the economies of scale and all the leverage. And, as a result, prepare for this:

Which is just the intended result: after all, the one thing missing from the “recovery” is inflation. Well, prepare to welcome unintended consequences number one of central planning. The only problem, declining wages aren’t going anywhere. And that’s for those who are lucky enough to hold jobs. Also, don’t forget that the only shining spot in the US wage field – shale jobs – is finished, and going forward not only will the shale patch not generate rising wages, but will in fact lead to the largest surge in layoffs seen in years.

Which is precisely what propaganda is for. And after all, Americans who can no longer afford to buy, or even rent a home can always live in their car, and now, thanks to plunging gas prices, heat themselves while sleeping in someone’s driveway. Because as the media loves reminding us each and every day, sub $2 gas is a “tax cut” for improverished American consumers everywhere.

Now if only those same consumers had full-time jobs and/or anything resembling stable (forget rising) wages, they would even spend more just as Keynesian theory suggests, if only in theory.