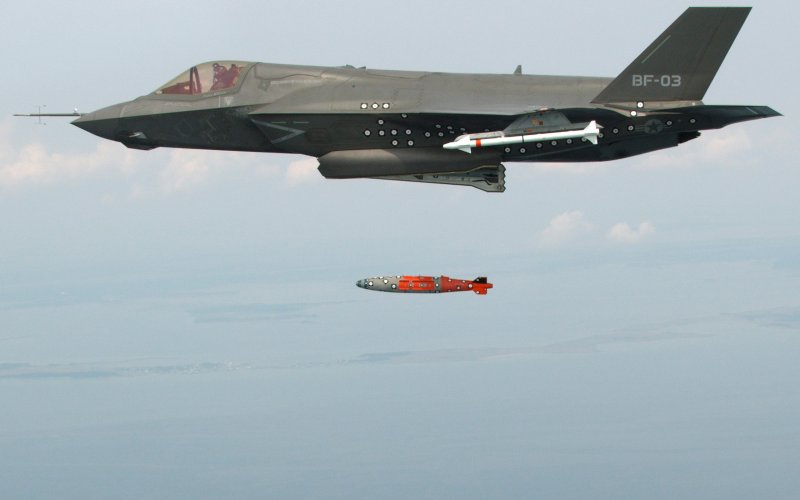 America’s $400 billion, top-of-the-line aircraft can’t see the battlefield all that well. Which means it’s actually worse than its predecessors at fighting today’s wars.
When the Pentagon’s nearly $400 billion F-35 Joint Strike Fighter finally enters service next year after nearly two decades in development, it won’t be able to support troops on the ground the way older planes can today. Its sensors won’t be able to see the battlefield as well; and what video the F-35 does capture, it won’t be able to transmit to infantrymen in real time.Versions of the new single-engine stealth fighter are set to replace almost every type of fighter in the U.S. Air Force, Navy and Marine Corps inventory—including aircraft specifically designed to support ground troops like the A-10 Warthog. That will leave troops in a lurch when the F-35 eventually becomes the only game in town.

“The F-35 will, in my opinion, be 10 years behind legacy fighters when it achieves [initial operational capability],” said one Air Force official affiliated with the F-35 program. “When the F-35 achieves [initial operational capability], it will not have the weapons or sensor capability, with respect to the CAS [close air support] mission set, that legacy multi-role fighters had by the mid-2000s.”

The problem stems from the fact that the technology found on one of the stealth fighter’s primary air-to-ground sensors—its nose-mounted Electro-Optical Targeting System (EOTS)—is more than a decade old and hopelessly obsolete. The EOTS, which is similar in concept to a large high-resolution infrared and television camera, is used to visually identify and monitor ground targets. The system can also mark targets for laser-guided bombs.

“EOTS is a big step backwards. The technology is 10-plus years old, hasn’t been able to take advantage of all the pod upgrades in the meantime, and there were some performance tradeoffs to accommodate space and stealth,” said another Air Force official familiar with the F-35 program. “I think it’s one area where the guys are going to be disappointed in the avionics.”

Ironically, older jets currently in service with the Air Force, Navy and Marine Corps can carry the latest generation of sensor pods, which are far more advanced than the EOTS sensor carried by the F-35. The latest generation pods—the Lockheed Martin Sniper ATP-SE and Northrop Grumman LITENING-SE—display far clearer high-definition video imagery in both in the infrared and optical spectrum—and from greater distances. Further, both pods have the ability to beam those full-motion video feeds to ground troops, which provides those forces with vital intelligence information.

The end result is that when the F-35 finally becomes operational after its myriad technical problems, cost overruns, and massive delays, in some ways it will be less capable than current fighters in the Pentagon’s inventory.

Both pods also incorporate the ability to mark targets with an infrared laser beam—which the EOTS lacks—that helps pilots and ground controllers coordinate their attacks. Some pilots consider the infrared marker to be crucial to the close air-support mission to support ground troops. The F-35 EOTS, which is an integral component of the new stealth fighter, was envisioned as a replacement for targeting pods altogether to preserve the JSF’s stealth frame. (Targeting pods can bulge out a bit, and leak out unwanted signals.) But along with the stealth came performance compromises that also hinder the ability to upgrade the system—the specifications of which were set more that 15 years ago—far before anyone imagined a jet would be providing video imagery to ground forces.

When the Pentagon had initially drawn up the Joint Strike Fighter program’s specifications during the later half of the 1990s, the EOTS would have been bleeding-edge technology. However, in the 14 years that have passed since the Pentagon awarded Lockheed the contract to develop the F-35, technology has evolved—and the services have gained experience from over a decade of war.

“It was an awesome system when the F-35 specs were drawn-up in the late ’90s—LANTIRN [targeting pod] was the most advanced pod at that time,” said the first Air Force official affiliated with the F-35 program. “But we’re now a couple of generations beyond that spec with the targeting pods. EOTS is about a [1990s-era Northrop Grumman AN/AAQ-28(V)] LITENING II-equivalent targeting pod.”

That means that the EOTS camera does not have the range or high-resolution capability that would be found on the current targeting pods carried by American fighters flying over Iraq, Syria, and Afghanistan. It also means that future F-35 pilots won’t be able to see their quarry in the same kind of detail that they can on current U.S. jets.

The Air Force is currently using the advanced LITENING-SE on many of its fighters like the F-16, which is about two generations newer than the old 1990s-vintage LITENING II-pod. Meanwhile, Lockheed Martin is delivering the new Sniper Advanced Targeting Pod-Sensor Enhancement (ATP-SE) to the Air Force—which is, ironically, an advanced version of the original Sniper XR pod that the F-35’s EOTS sensor was based on.

More damningly, the F-35 won’t be able to send even its already lower-quality live video down to those soldiers on the ground because its specifications were set before the wars in Iraq and Afghanistan started. Back then, no one ever imagined needing to beam live video to ground troops from a fighter jet. Nor are there any current plans to add that capability to the F-35.

“At no point is F-35 fragged to have VDL unless it carries a targeting pod and the F-35 EOTS does not have and will not get an IR [infrared] marker,” the first F-35 official said. “It won’t fit in the space available.”

The lack of an infrared pointer is a huge problem, according to multiple Air Force pilots with experience flying combat missions in support of ground forces. In aircraft like the A-10, F-15E or F/A-18 Hornet, when ground troops pass target coordinates—or if the pilot spots enemy forces shooting—that pilot can turn on the infrared pointer to highlight the target. If the ground controller—known as a Joint Terminal Attack Controller—sees the “sparkle” from the infrared pointer, he can confirm that the pilot is illuminating the correct target.

Further, if a pilot sees something of interest, he or she can use the infrared pointer to draw the attention of the ground controller, who can then confirm if the target is hostile or not. “F-35s will never have this,” the first F-35 official said. “It also helps pilots orientate themselves during weapons delivery passes.”

Officials at JSF-maker Lockheed Martin couldn’t respond to queries by press time, but the F-35 program does not appear to have a plan to rectify the problem.

One Air Force official said that with enough time and more money, the EOTS could be fixed. “Because in five years when the USAF [US Air Force] comes to Lockheed Martin and says we absolutely need an upgraded EOTS with an infrared pointer and, Lockheed Martin says… OK no sweat, that’ll be $5 million per jet,” the Air Force official said. “Thus lies the problem in the U.S. military industrial complex. They purposefully build products that require mass amounts of money to ‘upgrade’ when in fact, they could have planned ahead and built an easily upgradable ship / aircraft / radio / weapon system.”

One of the JSF officials agreed that the EOTS does not speak well for the Pentagon’s ability to buy new weapons. “EOTS is a poster child for one of the ills of the acquisition process,” the official said. “Because all of the subsystems depend on each other, requirements aren’t allowed to change after the design is ‘finalized.’ It’s not a big deal, unless it takes 20 years to field the jet… then it’s a problem.”

The end result is that when the F-35 finally becomes operational after its myriad technical problems, cost overruns, and massive delays, in some ways it will be less capable than current fighters in the Pentagon’s inventory.

“Will the F-35 even have parity with those jets in the CAS mission set 10 years from now? I don’t know, dude. It doesn’t look good.”