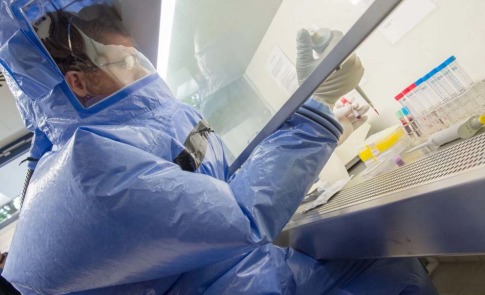 – CDC Admits Its Researchers Were Exposed To Ebola Several Days Ago (ZeroHedge, Dec 25, 2014):

Somehow news about Ebola in the US managed to get past the Ron Klain media gauntlet.

Two months after stocks would tumble on the merest hint of an Ebola case in the US – a threat that has now largely been forgotten – the WaPo reports that researchers studying Ebola in a highly secure laboratory “mistakenly” allowed potentially lethal samples of the virus to be handled in a much less secure laboratory at the Centers for Disease Control and Prevention in Atlanta, agency officials said Wednesday.

As a result, one technician in the second laboratory may have been exposed to the virus and about a dozen other people have been assessed after entering the facility unaware that potentially hazardous samples of Ebola had been handled there.

The “discovery” did not take place half a year ago when nobody had any idea how extensive the Ebola epidemic would be: it took place three days ago, on Monday afternoon. It was discovered by laboratory scientists Tuesday and within an hour reported to agency leaders.

And now that the most sophisticated disaease fighting agency in the US was exposed, literally and metaphorically, the damage control is unleashed: “At this time, we know of only the one potential exposure,” CDC Director Tom Frieden said in a telephone interview.

“The error, which is under internal investigation, was reported to Secretary of Health and Human Services Sylvia Mathews Burwell and to a program that has oversight over pathogens such as Ebola and anthrax.”

The technician has no symptoms of illness and is being monitored for 21 days. Agency officials said it is unlikely that any of the others who entered the lab face potential exposure. Some entered the lab after it had been decontaminated. Officials said there is no possible exposure outside the secure laboratory at CDC and no exposure or risk to the public.

In a statement, Frieden said he was troubled by the mistake in the CDC’s Ebola research lab. “Thousands of laboratory scientists in more than 150 labs throughout CDC have taken extraordinary steps in recent months to improve safety,” he said. “No risk to staff is acceptable, and our efforts to improve lab safety are essential — the safety of our employees is our highest priority.”

Of course it is, the problem is that just like the “economic recovery”, so the public’s confidence that the CDC – which apparently can’t contain Ebola in its own labs – is capable of preventing the deadly disease spread in the US, is based on one word: faith.

Several more mistakes like this, however, and not only will said faith be shaken, but Americans may start wondering if the only reason an Ebola Czar was appointed was to allow America’s “most transparent administration ever” to do the only thing it is good at: hide facts from the US public.

In the interview, Frieden said the agency’s goal to have systems in place to mitigate human error “was not met here.” The mistake was discovered Tuesday when workers looked in the freezer in the Ebola research lab — one of the highest-security biosafety labs, known as a Level 4 — and saw material that was supposed to have been sent to a different, less-secure lab in the same building.

They realized something was wrong.

The researchers had been studying the effects of Ebola on guinea pigs in the high-security lab to find out whether the Ebola strain that has devastated West Africa this year is deadlier than previous strains.

The technician in the second lab should have recognized, via the color coding on the test tubes, that this was hazardous material that should have stayed at the first lab, officials said. That technician is the person who could have been exposed.

The lab where Monday’s potential exposure occurred was decontaminated and the material destroyed as a routine procedure before the error was identified. The laboratory was decontaminated for a second time and is now closed. Transfers from the high-security lab have stopped while the review is taking place.

The high-security lab where the first mistakes were made also performs diagnostic tests for Ebola, and has conducted hundreds of those tests since July. Stuart Nichol, a top CDC official, said diagnostic testing for Ebola will be moved to a different lab.

One would think that all of the above would have been made be impossible after the summer’s developments when “the CDC temporarily banned transfer of all biological materials from its labs, conducted a wide-ranging safety review, appointed a new director of lab safety and created an outside lab safety advisory group.” That, and of course the appointment of Ron Klain by Obama.

Furthermore, at congressional hearings, the CDC’s Frieden had vowed to improve the agency’s overall safety culture as well as put in place stronger oversight measures.

Apparently he only promised on paper:

biosafety experts have criticized the lack of coordination and oversight at laboratories inside and outside the federal government that conduct research on microbes that could be used as bioterrorism agents.

“Such events like this are absolutely unacceptable even once. When they occur multiple times, you have to ask yourself what systems are in place to prevent this from happening,” Michael Osterholm, director of Center for Infectious Disease Research and Policy at the University of Minnesota, said in an interview Wednesday

The answer, apparently, is none, because at the end of the day it all comes down to the bolded word above: faith.

Meanwhile, there are now nearly a record 20,000 Ebola cases, and over 7,000 Ebola deaths around the globe.

But don’t worry, and remember – just keep the faith: after all the government knows best what you should and shouldn’t know and would never put anyone in harm’s way just to avoid panic.