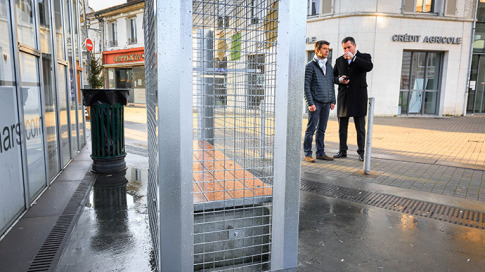 Wire grid has been placed around a public bench to prevent homeless from drinking alcohol and sleeping on it, on December 25, 2014 in Angouleme, southwestern France

The right-wing city council of Angouleme in southwest France has come under fire for banishing homeless people from its city center, after it installed cages that completely cover benches used by local hobos.

The municipal deputy responsible for security, Joel Guitton, told AFP that the benches were “almost exclusively used by people who consume alcohol on a regular basis,” and claimed the decision was taken in concert with local traders, who complained that threatening behavior was driving away customers.

Regional daily Sud Ouest alleged that the Champ de Mars had become a scene of regular fights between the homeless, often provoked by drugs and involving dogs.

But social media users say the unusual severity of the measure shows that local authorities “lack empathy.” and have called for protests, and even unsanctioned demolitions of the cages. Earlier this year, the city of 40,000 people elected Xavier Bonnefont, an ambitious 34-year-old whose rise has already earned comparisons to the career of Nicolas Sarkozy – who himself came to prominence as a young mayor of a small community.