This is simply stunning.

Regular readers will recall that last month, at the same time as the US Bureau of Economic Analysis reported was a far better than expected 3.9% GDP (since revised to 5.0% on the back of the previously noted Obamacare spending surge), it also released its Personal Spending and Income numbers for the month of October, or rather revised numbers, because as we explained exactly one month ago “Americans Are Suddenly $80 Billion “Poorer“” thanks to (upward) revised spending data and (downward) revised income. What this meant a month ago is that as a result of a plunge in the imputed US savings rate, some $80 billion in personal savings was revised away from the average American household and right into the US economy.

After all, something had to grow the US GDP by a massive amount in order to give the Fed the green light it needs to hike rates eventually, just so it can then ease when the global dry powders from all the other central banks is used up.

And sure enough, this is how just one month ago, personal income was revised lower… 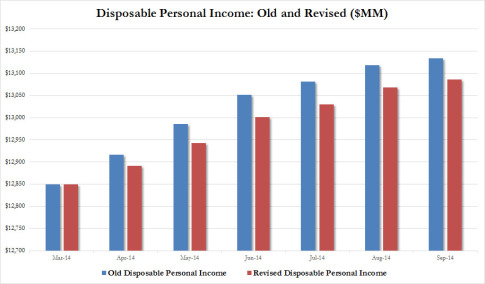 … Even as personal spending was revised higher: 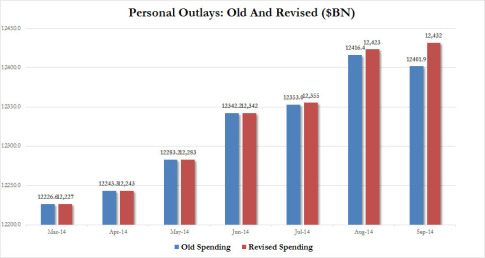 Leading to an $80 billion revision lower in personal saving, and by mathematical identity, a comparable growth in US GDP. 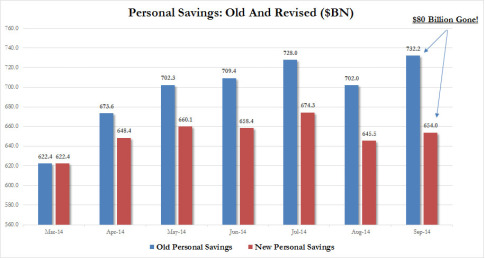 Fast forward to today when we find that… absolutely nothing has changed, and in order to boost US GDP some more, the BEA engaged in precisely the same data revision trick!

On the surface, today’s Personal Income and Spending data were inline to a little bit better than expected:

So far so good: nothing abnormal, and in fact, in isolation this data would be good, suggesting the US consumer is spending more as the year closes.

And then we looked at the Personal Savings number: it was reported at 4.4% in November, down from 4.6% in October. Which is odd because last month, the October savings rate was disclosed as 5.0%, in turn down from a downward revised 5.6% in September.

Wait, could the BEA be engaging in precisely the same deception in November as it did in October.

Why yes, Virgina: not only did the US Department of Economic Truth completely fabricate its GDP numbers earlier, but the way it got to said fabrication is by fudging – for the second month in a row – both the entire Personal Income and Personal Saving data series.

Behold what the original data looked like in October, in November, when the extensive and already documented data revision took place, and just now, when the December data shows that the BEA once again revised everything just as it had previously.

To wit: here is Personal Income, revised substantially lower yet again, for every single datapoint of Q3 and then some, from July until October! 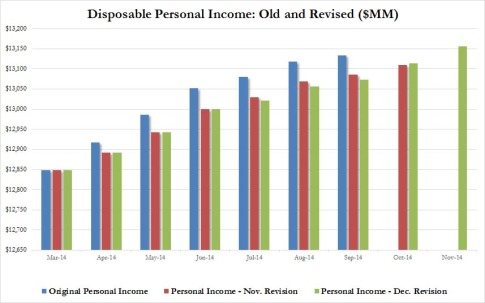 Sure enough, here is the revision to Personal Outlays: once again, a reduction in income magically meant that US household spent more in retrospect. As the chart below shows, Personal Outlays (Spending) was revised higher from July until October as well. What is most impressive is how the revision shifted the slope of US personal spending from one of Slowdown as reprted in October, to a literal explosion based on the latest data. 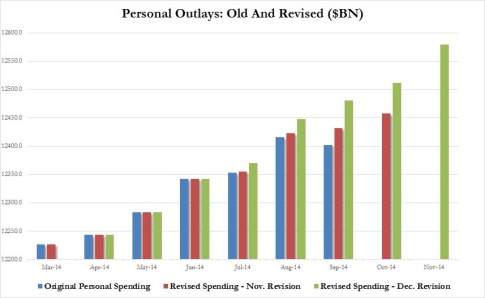 So how was all this spending funded? Simple: Americans “supposedly” dug massively into their savings, and as the following chart shows, Personal Savings have now crashed from what was originally an “unrevised” 5.6% in September, subsequently revised to 5.0% in November and 4.5% currently, and all the way down to 4.4% in November. Incidentally, this is the lowest savings rate since 2013, and the lowest savings rate for the month of November since 2006! 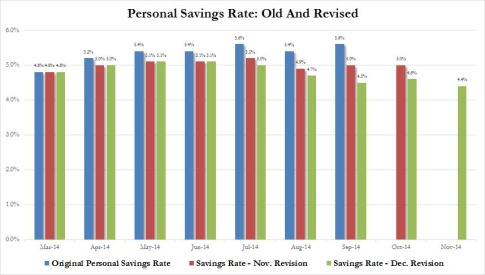 So what do all these revisions mean numerically? Luckily we can put absolute numbers alongside the savings rates, and as the following chart show, as of September 30, or the end of Q3, when US GDP supposedly soared by 5% annualized we now know that data revisions of personal income and spending alone generated… 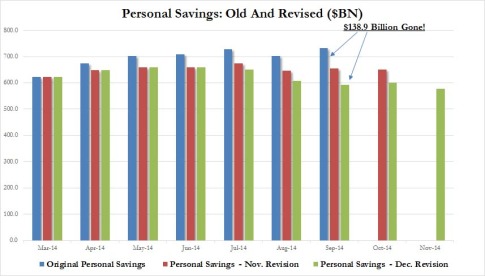 So what does this mean? Well, as we learned earlier US GDP grew in Q3 by a nominal $272 billion to $17.6 trillion. We now know that more than half of this increase came from, drum roll please, data revisions!

In other words, US GDP, using pre-revision data, would have been less than 2.5%. But that woul dhardly lead to the euphoric blow-off top rally we have seen today which sent the DJIA for the first time ever above 18,000, which in turn is so critical to boost consumer confidence so Americans will, in real life, do what the BEA hopes they have already done at least on paper, and that is reduce their savings by a whopping 20% at the end of September, or by some $140 billion, to $593 billion in order to spend, spend, spend.

And the other irony: as the BEA also reported, what did Americans allegedly spend the bulk of their savings on? 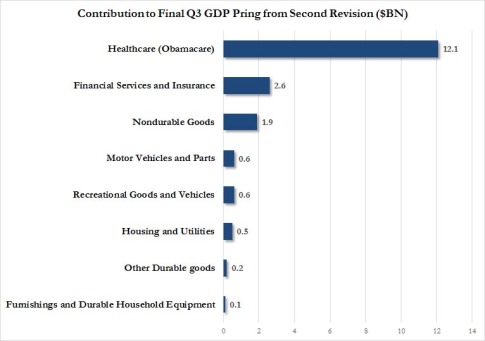 So in short, today the market is euphoric and hitting all time highs because Americans dug into their savings and spent billions on the “Affordable” Care Act.

And that, ladies and gentlemen, is the short answer why the US is “growing” when the rest of the world is mired in a triple (or quadruple if one is Japan) recession.

2 thoughts on “Exposing The Deception: How The US Economy “””Grew””” By $140 Billion As Americans Became Poorer”