In a healthy, moral and civilized society defined by the rule of law, police can play an important role. They should be people who come from the communities they promise to “protect and serve.” They should view themselves as a part of these communities, not as something separate and distinct. Police should see their jobs as having a great degree of risk, and must be willing to accept that risk. This means not pretending to be a solider at war, not choosing the most violent solution to every problem, and not viewing the citizenry as milk cows ready and willing to be drained of their assets via civil forfeiture.

Unfortunately, this isn’t the state of the police in America in 2014, and it’s quickly becoming obvious to everyone. Ferguson was a key moment in this awakening, when white pundits and others typically confined to less distraught communities, witnessed the militarized police in all its SWAT team horror for the first time. In the piece, “A Good Time Was Had By All” – The Obamas Dance the Night Away as Ferguson, Missouri Burns, I wrote:

I believe Ferguson will be seen as a major turning point. The point in which many well-intentioned, but incredibly naive folks in white mainstream America woke up to what we have become. Many people, particularly those in the media, have been willfully ignorant about the destruction of freedom and civil liberties in America. The events in Ferguson have taken a gigantic mirror and successfully pointed it squarely at our civil society and the image it has reflected back is one of a horrific, militarized, authoritarian monster.

Many people have strongly condemned the failure of a grand jury to indict officer Darren Wilson for the shooting of Michael Brown, but a far more disturbing failure occurred yesterday. This relates to a case from my hometown of NYC, where a cop was caught strangling an unarmed man to death in broad daylight for the non-crime of selling untaxed cigarettes. The man’s name was Eric Garner and the entire incident was caught on tape. It’s absolutely horrifying that the cops were not indicted here, and proves that like bankers, the profession is completely above the law.

I know, I know, where’s the proof? Well here’s some from FiveThirtyEight:

A St. Louis County grand jury decided Monday that police officer Darren Wilson will not face trial for shooting and killing unarmed teenager Michael Brown in Ferguson, Missouri. Grand juries usually return indictments; the one exception is cases involving police shootings. But more than that, police shootings, and allegations of police misconduct in general, almost never make it in front of a grand jury. And officers rarely face legal consequences for allegations of misconduct.

This chart from the site pretty much sums it up. Read it and weep. 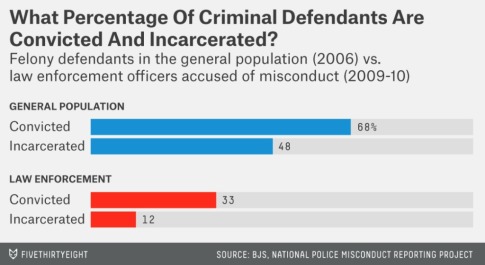 Rather than giving cops the “benefit of the doubt,” I would argue that, if anything, police should be held to a higher standard. This is because once the general population starts to lose trust in cops things can get very nasty, very quickly. This trust is important and it needs to be based on reality, not propaganda.

To understand how absurd the lack of an indictment is in the Garner case specifically, the Huffington Post notes:

Grand juries are meant to determine only whether there is “probable cause” to indict a criminal suspect — a standard far lower than the “beyond a reasonable doubt” standard that comes into play when deciding guilt at trial. Federal prosecutors secured indictments in more than 99.9 percent of the 162,000 cases they brought before grand juries in 2010. But in Missouri and New York, two grand juries decided that even that low hurdle had not been surmounted.

How you can watch that video and not see probable cause is simply beyond me.

With that in mind, watch the following powerful video: This Is What Happens When You Call the Cops

The video highlighted several cases that I’ve written about here at Liberty Blitzkrieg.

David Eckert: How a Routine Traffic Stop in New Mexico Turned into a Nightmare of Torture for David Eckert

*Photo at the top from the New York Daily News.