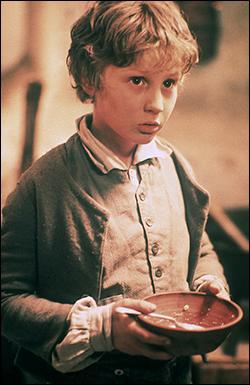 A JPMorgan Employee Uses a Photo of Oliver Twist to Joke in an Email About How His Group Is Manipulating Electric Markets in California.

– JPMorgan Rushed to Hire Trader Who Suggested on His Resume That He Knew How to Game Electric Markets (Wall Street On Parade, Dec 3, 2014):

On April 29, 2010 at 7:47 in the evening, Francis Dunleavy, the head of Principal Investing within the JPMorgan Commodities Group fired off a terse email to a colleague, Rob Cauthen. The email read: “Please get him in ASAP.”

The man that Dunleavy wanted to be interviewed “ASAP” was John Howard Bartholomew, a young man who had just obtained his law degree from George Washington University two years prior. But it wasn’t his law degree that Bartholomew decided to feature at the very top of the resume he sent to JPMorgan; it was the fact that while working at Southern California Edison in Power Procurement, he had “identified a flaw in the market mechanism Bid Cost Recovery that is causing the CAISO [the California grid operator] to misallocate millions of dollars.” Bartholomew goes on to brag in his resume that he had “showed how units in reliability areas can increase profits by 400%.”

The internal emails at JPMorgan and Bartholomew’s resume are now marked as Exhibit 76 in a two-year investigation conducted by the U.S. Senate’s Permanent Subcommittee on Investigations into Wall Street’s vast ownership of physical commodities and rigging of commodity markets. Senator Carl Levin, the Chair of the Subcommittee, had this to say about the resume at a hearing conducted on November 21:

“There’s two things that I find incredible about this. First, that anyone would advertise in a resume that they know about a flaw in the system — signaling that they’re ready and willing to exploit that flaw. And, second, that somebody would hire the person sending that signal.”

JPMorgan not only hired Bartholomew, according to the Senate’s findings, but within three months from the date of the email to Dunleavy, “Bartholomew began to develop manipulative bidding strategies focused on CAISO’s make-whole mechanism, called Bid Cost Recovery or BCR payments.” By early September, the strategy to game the system was put into play. By October, the JPMorgan unit was estimating that the strategy “could produce profits of between $1.5 and $2 billion through 2018.”

The strategy of gaming the Bid Cost Recovery payments, or BCR, was producing such windfall profits that another JPMorgan employee sent an email on October 22, 2010 to his colleagues, joking about the success by featuring a photograph of Oliver Twist holding out an empty bowl with the subject line: “Please sir! mor BCR!!!!”