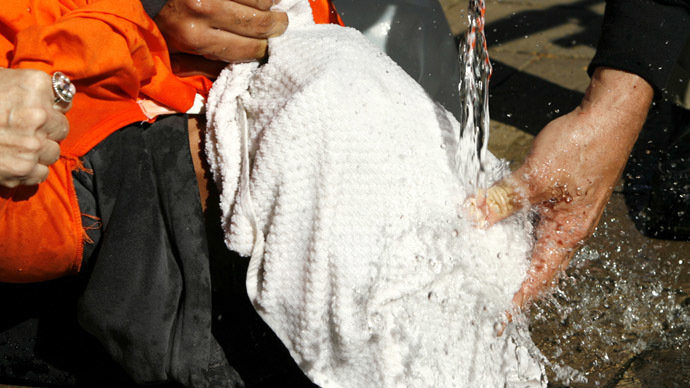 The long-awaited publication of the so-called “CIA torture report” is expected to finally occur early next week, but would-be readers, be warned: according to leaks, the executive summary will be absent any and all use of the word “torture.”

Sen. Dianne Feinstein (D-California), the chair of the United States Senate Intelligence Committee, now says that the public will be able to read the executive summary of her panel’s years-long investigation into the CIA’s use of enhanced interrogation techniques next week, with journalist Jason Leopold reporting that the release of the document will come as early as Monday.

Quote from DOJ atty to my atty on Sen/CIA rpt: “The plan is to release it on Monday. But it’s not within our control.”

After a lengthy back-and-forth between the Senate committee and the CIA, however, the 600 page summary that will soon be made public — less than one-tenth of the actual report — will be ripe with enough redactions and wordplay to still leave much of the agency’s post-9/11 practices a mystery.

“The summary is expected to reignite the debate over whether the CIA’s coercive interrogation techniques in the first years of the war on terror amounted to torture,” Josh Rogin and Eli Lake wrote for Bloomberg View on Wednesday this week. “Although the summary report is said to not use the word ‘torture,’ officials said it would describe practices that any layman would understand as torture.”

In the midst of the months of delays brought on by bickering between the Senate and CIA over what to include in the public version of the report, it was reported in July by the Associated Press that people who read the report said the practices described within “amounted to torture by a common definition.”

“This report tells a story of which no American is proud,” reads part of a State Department document about the Senate panel’s findings that was sent to the White House over the summer and subsequently received by journalists at AP. Indeed, Reuters reported this week that the report concludes that harsh CIA interrogation tactics, including the simulated drowning technique known as “waterboarding,” as well as sleep deprivation and other acts tantamount to torture, provided the US with no intelligence breakthroughs that could have been achieved by other non-coercive means.

The leaked copy of White House talking points obtained by the AP over the summer in anticipation of the eventual release of the report acknowledged that the government will likely be asked, “Isn’t it clear that the CIA engaged in torture as defined in the Torture Convention?” The next day, US President Barack Obama made headlines after offering arguably the most blatant official recognition yet from the executive branch concerning the practices authorized by his predecessor in the wake of September 11 terrorist attacks.

Nevertheless, indications from this week suggest that the Senate agreed to omit use of the t-word; according to Bloomberg, both Feinstein’s panel and the CIA agreed to certain concessions through negotiations brokered by the White House through Obama’s chief of staff, Denis McDonough: Rogin and Lake wrote that staffers in the Senate Intelligence Committed “objected vigorously to hundreds of redactions the CIA had proposed in the executive summary,” but ultimately both sides had to make sacrifices.

“Among the most significant of Feinstein’s victories, the report will retain information on countries that aided the CIA program by hosting black sites or otherwise participating in the secret rendition of suspected terrorists,” reads part of Wednesday’s Bloomberg report. Per the CIA’s request, however, those host nations won’t actually be named, but rather will reportedly by given code names, like “Country A.”

Elsewhere, Bloomberg reported that Feinstein “reluctantly agreed” to another request from the CIA: according to this week’s article, the pseudonymous fake names used by undercover agents have been redacted from the executive summary as well. Previously, the New York Times reported that the White House supported the CIA’s stance regarding the matter.

“Hopefully they won’t redact too much and hopefully the White House won’t let them get away with redacting too much,” Senate Armed Services Committee Chairman Carl Levin told The Daily Beast in July. “Until you see what they are going to redact, it’s hard to know what material you have to work with.”

In late August, Sen. Feinstein told “Meet the Press” that her committee was engaged with the Obama administration to ensure that redactions to the executive summary do not “destroy the report.”

“If you redact the evidence — heavily — then we cannot sustain our findings. We will not put out a report that does not enable us to sustain our findings. And I believe that that is understood,” Feinstein said then, adding that she expected the summary to be public by late September. Two months later, though, the New York Times reported that Democrats in charge of the Senate were accusing the White House of “trying to censor significant details” of the report, and that negotiations between the Senate and CIA managed by the White House were responsible for the delays.

On her part, Feinstein acknowledged previously that the report “uncovers startling details about the CIA detention and interrogation program and raises critical questions about intelligence operations and oversight.” Her committee’s $40 million, three-years-in-the-making investigation has been stymied in recent months after a stand-off erupted between the Senate panel and the CIA concerning allegations of spying concerning both parties. In late July, the CIA conceded that its officers had penetrated a Senate computer network used by staffers working on the report.

According to Reuters, the forthcoming executive summary includes 20 findings from the Senate about the results of the CIA program, as well as 200 pages of history on the topic, a rebuttal from the CIA and a dissent from congressional Republicans.