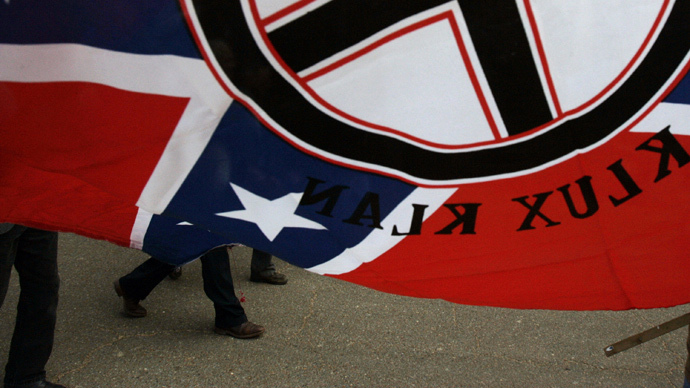 This kind of behavior is not exactly unusual for the KKK, which has circulated similar letters in various cities across the United States. But the delivery of these fliers comes at a particularly sensitive time in Ferguson and the surrounding St. Louis area.

Residents are currently waiting to hear whether or not a grand jury will bring criminal charges against Officer Darren Wilson, the white officer who shot and killed an unarmed black teenager named Michael Brown. The 18-year-old’s death sparked massive, weeks-long protests, which made headlines around the country after police deployed a number of controversial crowd-control tactics – the use of tear gas and the establishment of a no-fly zone over the city, for example.

No one knows exactly when the decision will be reached, but reports suggest the process is coming to a close and it could be any day now. Gun sales have spiked in the area, and some businesses have boarded up their storefronts in an attempt to preempt looting. Missouri Gov. Jay Nixon announced earlier this week that the National Guard would be on standby to respond to any reports of violence.

Speaking with the Riverfront Times, Ancona said: “Missouri is definitely on fire right now.” He also stated that the Ferguson protests were a boon for KKK recruiting.

“These Ferguson protesters are the best recruiters since Obama,” he said, noting that 50 people joined the group in November alone. “Normally we might hear from 10 people a week in Missouri, and now we’re hearing from more like 50 people a week. Sometimes, depending on these news stories, we get 100, 200 calls in a day.”

Soon after the new KKK fliers came to the public’s attention, Ancona appeared on MSNBC, where he was asked if he was inciting violence.

“No, actually it’s addressing the people who are making these terroristic threats and letting them know that the people of Missouri have rights too,” Ancona said. “There are remedies under the law. The flier, if you read it, it says ‘defend’, it talks about defense. So, in order to defend yourself, that means you’re being attacked.”

Activist Bassem Masri has been called out specifically by the KKK, which claims he threatened police while live-streaming one of the protests. Masri dismissed the accusation to Vice News.

“If they want to perpetuate hate, we can’t stop them, but we can surely let them know we ain’t going for it,” he said. “They are using the KKK to change the narrative to something they want, which is a race war which we are not advocating for, taking the story off [Missouri Governor Jay] Nixon, [St. Louis Country prosecutor Bob] McCulluch, and Darren Wilson.”

“It’s ok for the KKK to hate folks but God forbid a minority speaks up.”

3 thoughts on “Missouri KKK: We will use ‘lethal force’ against Ferguson protesters”