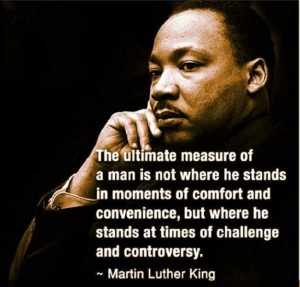 – The Full Letter Written by the FBI to Martin Luther King Has Been Revealed (Liberty Blitzkrieg, Nov 12, 2014):

Martin Luther King, Jr. is one of my personal heroes. Not just because of his outsized contribution to the civil rights movement, but because of his leadership capabilities and emphasis on non-violent civil disobedience. It also goes without saying, that this wasn’t just a great orator with enlightened tactics, he was also a highly intelligent man with a strong sense of history. This is on full display in his “Letter from Birmingham Jail,” which I highlighted in the piece: Martin Luther King: “Everything Adolf Hitler did in Germany was Legal.”

Here are some of his timeless words.

One who breaks an unjust law must do so openly, lovingly, and with a willingness to accept the penalty. I submit that an individual who breaks a law that conscience tells him is unjust, and who willingly accepts the penalty of imprisonment in order to arouse the conscience of the community over its injustice, is in reality expressing the highest respect for law.

I must make two honest confessions to you, my Christian and Jewish brothers. First, I must confess that over the past few years I have been gravely disappointed with the white moderate. I have almost reached the regrettable conclusion that the Negro’s great stumbling block in his stride toward freedom is not the White Citizen’s Counciler or the Ku Klux Klanner, but the white moderate, who is more devoted to “order” than to justice.

Actually, we who engage in nonviolent direct action are not the creators of tension. We merely bring to the surface the hidden tension that is already alive. We bring it out in the open, where it can be seen and dealt with. Like a boil that can never be cured so long as it is covered up but must be opened with all its ugliness to the natural medicines of air and light, injustice must be exposed, with all the tension its exposure creates, to the light of human conscience and the air of national opinion before it can be cured.

Naturally, a man that utters such words and who also has a considerable following would not appeal to the thug in charge of the FBI at the time, J. Edgar Hoover. So what did Mr. Hoover do? He sent a letter to Dr. King, pretending to be a black person and implied that he should kill himself. None of this is news, but until the New York Times released it yesterday, copies of this letter had always been partly redacted. We now have the uncensored version. Here it is: 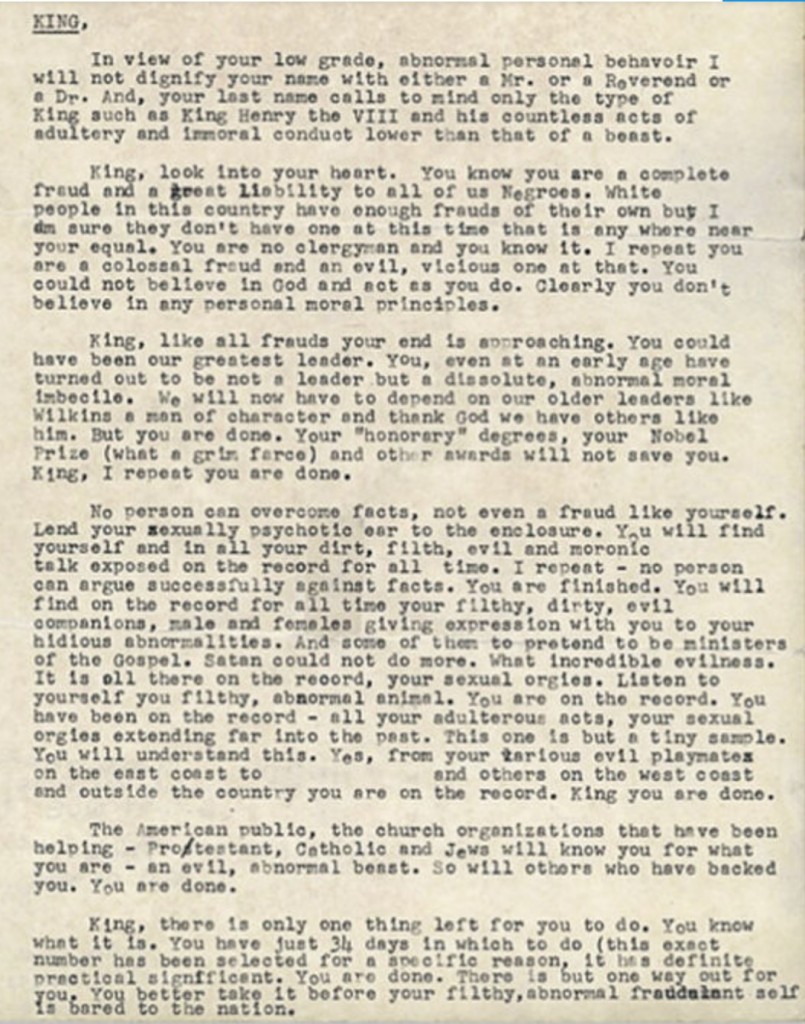 Now ask yourself a question. Is the FBI any more ethical today than it was back then? I would argue certainly not. After all, it had a file on on tech prodigy Aaron Swartz, who was driven to suicide by the feds. Now imagine what the FBI could do to political dissidents in a world in which they have a backdoor into all your electronic devices, which is precisely what it wants.

So the next time you think to yourself “so what, I have nothing to hide,” think again. You don’t know what the future holds, do you really want the status quo to have everything you’ve ever done or said accessible in an electronic file on you? What about the threat this poses to other people who put themselves in the arena of fighting for social change? Do you want the FBI to be able to do to them what they did to MLK but 10x worse? Think deeply about that.