Having exposed the disgraceful reality of ObamaCare’s passage into law (and then apologized for being caught saying that “stupidity of the American voter” helped Congress approve the bill); a 3rd and 4th clip of the healthcare law’s architect Jonathan Gruber (who Nancy Pelosi says she has never heard of despite her role in the law’s birth) have surfaced… and it’s not pretty. As CNN reports, the emergence of this video with Gruber repeatedly suggesting that “stupid” voters were misled for their own good by Obamacare supporters is a political problem for Obama as the Supreme Court is set to rule on subsidies.

“It’s a very clever, you know, basic exploitation of the lack of economic understanding of the American voter,” Gruber said at the Honors Colloquium 2012 at the University of Rhode Island.

“If you had a law which said healthy people are going to pay in — if you made it explicit that healthy people pay in and sick people get money, it would not have passed, OK? Just like how people — transparent — lack of transparency is a huge advantage. And basically, you know, call it the stupidity of the American voter or whatever. But basically that was really, really critical to getting the thing to pass.”

Gruber said he wished “we could make it all transparent. But I’d rather have this law than not.”

As CNN reports, on a 4th video…

In this latest video, Gruber’s language is not as stark as in three previous instances, but his suggestion that Obamacare proponents engaged in less-than-honest salesmanship remains.

[click image below for CSPAN link to Gruber’s speech] 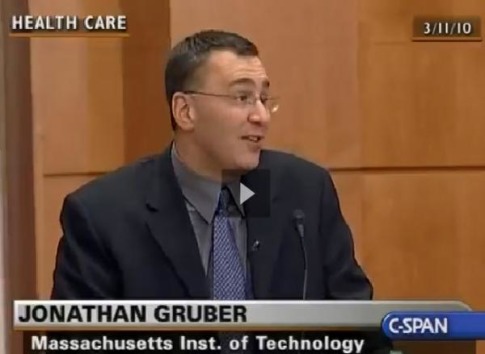 “Barack Obama’s not a stupid man, okay?” Gruber said in his remarks at the College of the Holy Cross on March 11, 2010. “He knew when he was running for president that quite frankly the American public doesn’t actually care that much about the uninsured….What the American public cares about is costs. And that’s why even though the bill that they made is 90% health insurance coverage and 10% about cost control, all you ever hear people talk about is cost control. How it’s going to lower the cost of health care, that’s all they talk about. Why? Because that’s what people want to hear about because a majority of American care about health care costs.”

Gruber said the measures in the bill that attempt to lower costs constitute a “spaghetti approach” — throwing everything against the wall to see what sticks. And while preferable to the status quo, Gruber said he could offer no guarantee that any of the measures would work.

“The only way we’re going to stop our country from being a latter day Roman Empire and falling under its own weight is getting control of the growth rate of health care costs,” he said. “The problem is we don’t know how.” Experts “know what the problem is,” he said. “Our providers are paid enormously high. In the 1950s surgeons are middle class guys like professors…Now they live on the Hamptons, the Cape, they’re like investment bankers.

Gruber said attempts to control costs in a real way were politically untenable. “The problem is if we just say, ‘Look, let’s just cut our spending,’ well, the problem is you’re going to then eat into what the rich guys are getting that they’re liking. And that doesn’t go so well. That’s going to be pretty hard politically. That’s why no one has a politically feasible way right now to bend the cost curve, it just doesn’t exist.” Politicians could suggest capping costs but “you wouldn’t win many elections.”

*  *  *
So – don’t worry, they lied and deceived you for your own good and in fact costs are just rising as ever…

*  *  *
Of course, the PR team is out en masse… dismissing it as political and blaming Republicans…

Asked about Gruber’s reference to the “stupidity of the American voter,” Earnest said, “I disagree vigorously with that assessment.” 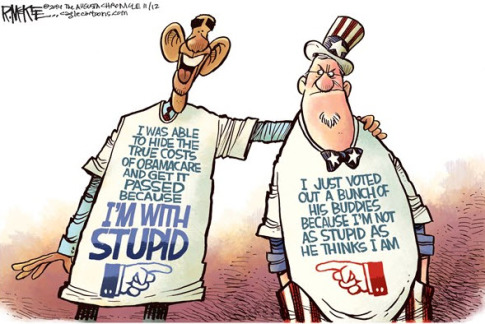