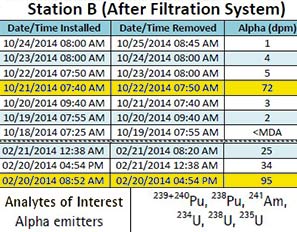 – Radiation levels spike 7,000% at US nuclear site — AP: Workers shelter inside buildings — Officials: It was less than we anticipated; Contaminated sample so safe “it could have been… put in someone’s lunch bucket” (VIDEO) (ENENews, Nov 11, 2014):

Nuclear Hotseat w/ Libbe HaLevy, Oct 21, 2014 — Don Hancock, Southwest Research & Information Center (at 22:30): Their analysis… showed the starting of that fan, it’s a different fan than the one that’s been operating most recently… could trigger some additional radiation coming out… Because the site is contaminated, there’s constantly the possibility that additional contamination can be released… This is an ongoing problem, and will be… unless the site is closed up… The DOE is proposing many activities that are very likely to release a lot more radioactivity than [the fan restart]… People are correct to be concerned… We’re talking about this going on for years into the future if DOE’s plans are approved.