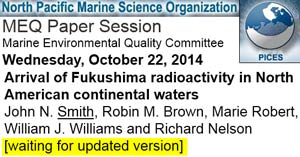 Department of Fisheries and Oceans Canada (pdf), Oct. 22, 2014 (emphasis added): Arrival of Fukushima radioactivity in North American continental waters… The radioactivity plume was transported northeastward towards North America by the Kuroshio Current… Water samples were collected… in June of 2011, 2012 and 2013 and February, 2014 on a line (Line P) extending to a location (Sta. P26), approximately 1500 km west of Victoria, BC… [W]ater samples collected in June, 2012 at Sta. P26 detected 134Cs at levels indicating the presence of contamination from the Fukushima nuclear reactor accident. The 2013 results revealed the presence of 134Cs in the upper 100 m along the entire length of Line P indicating that the Fukushima signal had fully arrived in Canadian territorial waters. Levels of Fukushima 137Cs were about 1 Bq/m3 in June, 2013 which is equivalent to previous background levels of 137Cs from atmospheric fallout. These levels had increased to values of about 2 Bq/m3 by February, 2014. These 137Cs concentrations are significant, but are several orders of magnitude below those that would be considered a threat to the environment or human health.

1 thought on “Canadian scientists detect “significant” concentrations of radioactive material off West Coast, levels double in months since last test — Marine Chemist: “Much greater concern” over Fukushima releases that will be hitting shores of US & Canada; Lack of data “really disturbing” (AUDIO)”