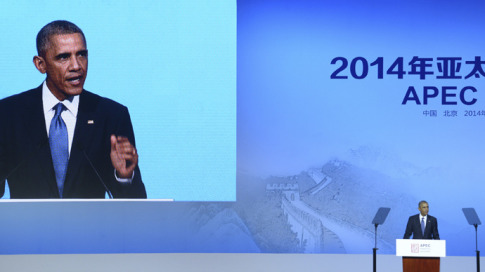 President Barack Obama is again pushing international leaders to finalize the trans-Pacific trade deal between 12 countries that would eradicate tariffs and regulations, but critics say the secretive negotiations have been a boon only to corporations.

Leaders of the countries negotiating the Trans-Pacific Partnership (TPP) deal at this week’s Asia Pacific Economic Cooperation (APEC) meetings have not set a timetable for settling the pact, but the Obama administration is optimistic that by end of his eight-day visit to Asia a deal can be reached.

If finalized, it would eliminate tariffs on goods and services and change regulations for labor, government procurement, state-owned enterprises, intellectual property and environmental protections. The deal would also enhance the United States’ presence in Asia, something the White House has wanted to do ever since President Obama was first inaugurated.

“This has the potential for being an historic agreement,” Obama said as he opened the trade talks being held on the sidelines of the broader Asia-Pacific conference in Beijing, according to The Associated Press. Notably, China is not a party to the pact.

In a joint statement following the meeting, leaders from the 12 nations involved said they have been encouraged by recent progress.

“We remain committed to ensuring that the final agreement reflects our common vision of an ambitious, comprehensive, high-standard, and balanced agreement that enhances the competitiveness of our economies, promotes innovation and entrepreneurship, spurs economic growth and prosperity, and supports job creation in our countries,” the statement read.

Obama has made the Trans-Pacific Partnership a centerpiece of his efforts to boost US economic investment in Asia, which he said Monday was “the fastest-growing, most populous, most dynamic region in the world economically.”

Negotiations for a trade deal began amongst Brunei, Chile, New Zealand and Singapore in 2003, with the US joining in 2008 alongside Australia, Canada, Japan, Malaysia, Mexico, Peru and Vietnam. However, the multi-national treaty negotiations, now a decade long, have been conducted in secret.

Only when Wikileaks published a draft version of the negotiating document did critics understand how it would erode intellectual property protections, changes to environmental regulations, and curb freedom of speech.

“While the TPP is being called a trade agreement, the US already has trade agreements (with most of the) countries involved in the talks. Instead, the TPP is a major power grab by large corporations,” said Margaret Flowers, MD, former congressional fellow for Physicians for a National Health Program told the Institute for Public Accuracy. Doctors are particularly interested in the pact because it contains a threat to the availability of generic drugs.

“The text of the TPP includes 29 chapters, only five of which are about trade,” she added. “The remaining chapters are focused on changes that multinational corporations have not been able to pass in Congress, such as restrictions on internet privacy, increased patent protections, greater access to litigation and further financial deregulation.”

Flowers said the negotiations are shrouded in secrecy because the more people know about it, the more they will oppose the agreement. More than 600 corporate advisers were working with the US Trade Representative to draft the TPP, she said, “means that for more than four years some of the top corporate lawyers have been inserting phrases, paragraphs and whole sections so the agreement suits the needs of corporate power, while undermining the interests of people and planet.”