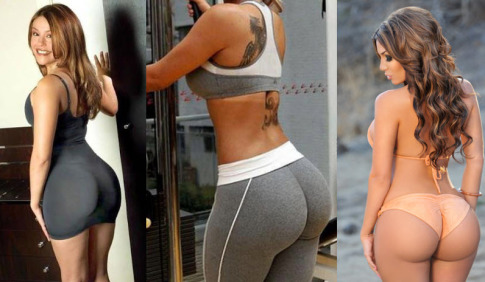 The U.S. booty business is getting a big bump, as AP reports companies are cashing in on growing demand from women seeking the more curvaceous figures of their favorite stars. While Millennials may spend most of their day sitting on their Minaj-esque “big fat butts” playing Kardashian, the business of boosting butts is bursting. From padded panties and gym classes that promise plumper posteriors to the “Brazilian butt lift,” in which fat is sucked from a patient’s stomach, love handles or back and put into their buttocks and hips, French sociologist Jean-Claude Kaufmann says “there’s a trend to show off the buttocks in place of breasts due to the rise of Beyonce,” Jennifer Lopez, and more recently Meghan Trainor. The bottom line – butt lifts and implants are the fastest growing plastic surgery, helping GDP at a cost of $10-13k each.

Gym classes that promise a plump posterior are in high demand. A surgery that pumps fat into the buttocks is gaining popularity. And padded panties that give the appearance of a rounder rump are selling out.

The U.S. booty business is getting a big bump. Companies are cashing in on growing demand from women seeking the more curvaceous figures of their favorite stars, who flaunt their fuller rear ends.

Nicki Minaj, for instance, raps about her “big fat” butt in “Anaconda.” Reality star Kim Kardashian posts photos of hers on Instagram. And in the music video for “Booty,” Jennifer Lopez and Iggy Azalea, wearing leotards, spend four minutes rubbing their curvy bottoms together. At one point, they slap each other on the booty.

As a result of the pop culture moment the butt is having, sales for Booty Pop, which hawks $22 foam padded panties on its website, are up 47 percent in the last six months from the same period a year earlier. The company, which declined to give sales figures, has sold out of certain styles and colors this year, including its Pink Cotton Candy Boy Shorts.

“The Nicki Minaj song gave women the idea to pay attention to their rear end,” says Jessica Asmar, co-owner of the Houston company.

But recently, the desire for a bigger bottom became more mainstream, in large part due to pop culture influences. Mainstream celebrities like Lopez and Minaj accepting their ample assets on camera have given the butt cachet. “When people see things repeated on TV more and more, it becomes normalized,” Stephens says.

A Brazilian butt lift, in which fat is sucked from a patient’s stomach, love handles or back and put into their buttocks and hips, is increasingly popular in the U.S. This type of surgery, along with buttock implants, was the fastest-growing plastic surgery last year, with more than 11,000 procedures, up 58 percent from 2012, according to the American Society for Aesthetic Plastic Surgery.

Dr. Matthew Schulman, who performs the procedure in New York, says this year has been busier than last. Schulman, who charges $10,000 to $13,000 for the three-hour surgery, does six to eight Brazilian butt lifts weekly, up about 25 percent from a year ago.

At a gym in Boston, there’s a waitlist for a $30 class that fits in 120 squats in 45 minutes. The class, Booty by Brabants, was started by Kelly Brabants a year ago. Brabants starts most classes, held at The Club by George Foreman III gym, with Lopez’s “Booty” song. By the end of the year, she plans to expand her brand by selling $65 workout leggings that help perk up the butt.

“It’s not about being stick-thin anymore,” says Brabants. “Every girl now wants a booty.”

How long before a Brazilian Butt-lift is covered by ObamaCare… because it’s fair.

“In uncertain times, people look for security,” he says. “Men are attracted to women’s hips and the buttocks for security and reassurance. Women respond to this. It’s deeply psychological.”

And by now it is all too clear the Fed is all about security, reassurance, and confidence.