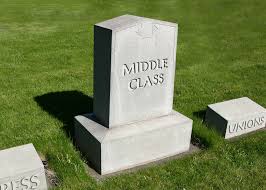 One of Liberty Blitzkrieg’s most popular posts in 2013 was titled: How Does America’s Middle Class Rank Globally? #27. Here’s an excerpt:

We are number 1 right? USA! USA! No one can beat our wealth creation machine, our economic dynamism, our level playing field and our bastions of higher education. We have a middle class that is the envy of the world, right?

Well, like so much of the “American dream” we have been force fed for a generation or more, this perception is not based in reality whatsoever. Sure it may have been the case for a couple of decades immediately after World War 2. Before the military-industrial-Wall Street complex fully took over the political process, but it certainly isn’t true any longer. Myths die hard and this one is particularly pernicious because it prevents people from changing things.

The data in that article was based on a comprehensive study published by Credit Suisse titled Global Wealth Data Book. Well, the 2014 version is now out, and the results are not pretty.

Paul Buchheit has crunched the numbers, and highlighted some of his conclusions here. Here is some of what he found:

A recent posting detailed how upper middle class Americans are rapidly losing ground to the one-percenters who averaged $5 million in wealth gains over just three years. It also noted that the global 1 percent has increased their wealth from $100 trillion to $127 trillion in just three years.

The information came from the Credit Suisse 2014 Global Wealth Databook (GWD), which goes on to reveal much more about the disappearing middle class.

1. Each Year Since the Recession, America’s Richest 1 percent Have Made More Than the Cost of All US Social Programs

Much of the 1 percent wealth just sits there, accumulating more wealth. The numbers are nearly unfathomable. Depending on the estimate, the 1 percent took in anywhere from $2.3 trillion to $5.7 trillion per year. (All numeric analysis is detailed here.)

2. Almost None of the New 1 percent Wealth Led To Innovation and Jobs

On the corporate side, stock buybacks are employed to enrich executives rather than to invest in new technologies. In 1981, major corporations were spending less than 3 percent of their combined net income on buybacks, but in recent years they’ve been spending up to 95 percent of their profits on buybacks and dividends.

3. Just 47 Wealthy Americans Own More Than Half of the US Population

Oxfam reported that just 85 people own as much as half the world. Here in the US, with nearly a third of the world’s wealth, just 47 individuals own more than all 160 million people (about 60 million households) below the median wealth level of about $53,000.

This right here may be the most startling fact of all…

4. The Upper Middle Class of America Owns a Smaller Percentage of Wealth Than the Corresponding Groups in All Major Nations Except Russia and Indonesia

America’s bottom half compares even less favorably to the world: dead last, with just 1.3 percent of national wealth. Only Russia comes close to that dismal share, at 1.9 percent. The bottom half in all other nations own 2.6 to 10.2 percent of the wealth.

Here’s a screenshot of the table detailing the pathetic status of America’s upper middle class from the report: 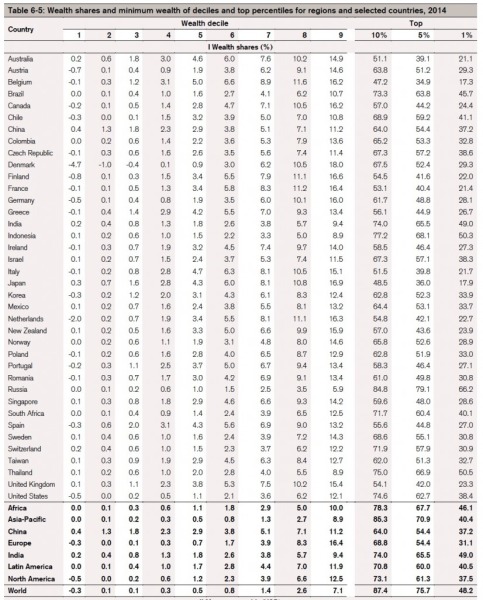 5. Ten Percent of the World’s Total Wealth Was Taken by the Global 1 percent in the Past Three Years

As in the US, the middle class is disappearing at the global level. An incredible one of every ten dollars of global wealth was transferred to the elite 1 percent in just three years. A level of inequality deemed unsustainable three years ago has gotten even worse.

While Paul’s observations are very important, I take issue with one aspect. Although his stats on the 1% are accurate, the truth is that the 1% have largely been treading water over the last few years. It is actually the 0.01% that have made all of the gains. Thus the transformation of America into an oligarchy (which was recently proven in an academic study).

To be fair, it doesn’t seem that Credit Suisse breaks down the data into these subsections (it should since this is where all the action really is). As this chart from a previous post, Where Does the Real Problem Reside? Two Charts Showing the 0.01% vs. the 1%, demonstrates: 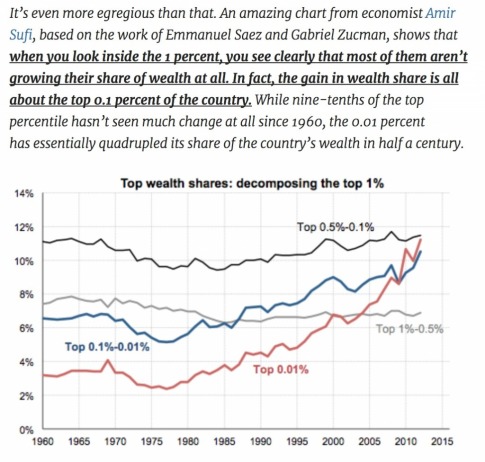 This is an important distinction, since so much of the wealth disparity since 2008 has been driven by crony insider deals and the Federal Reserve injecting trillions of dollars into assets owned by banks and other financial oligarchs. Most of the 1% has no influence on government or Fed policy, nor do they want to. It is the 0.1% that exerts all of this influence and uses it to thieve.

Oh, and if you’re wondering how the American middle class ranks in the latest data, it improved two spots to #25. Just behind Greece.