– Ray McGovern, CIA Analyst for 27 Years, is Arrested and Roughed Up in NYC for Trying to Protest Retired General Petraeus (Liberty Blitzkrieg, Oct 31, 2014):

The following post should serve as a serious red flag to all of you who currently mindlessly serve the state in some capacity. First off, here’s a little background on Ray MacGovern. His bio on Wikipedia starts off with:

Raymond McGovern (born August 25, 1939) is a retired CIA officer turned political activist. McGovern was a CIA analyst from 1963 to 1990, and in the 1980s chaired National Intelligence Estimates and prepared the President’s Daily Brief. He received theIntelligence Commendation Medal at his retirement, returning it in 2006 in protest at the CIA’s involvement in torture.

So here we have a decorated, lifetime government employee who served the U.S. power structure in a greater capacity than 99.9% of all those flag waving, “thank you for your service” phonies out there. Over time, Mr. McGovern recognized the evils of American empire and he became an activist. Ever since then, he has been harassed, abused and placed on watch-lists by the country he so diligently served.

Earlier this month, I highlighted a separate encounter McGovern had with thuggish police-state goons in the post: A Tale from Post-Constitutional America – This is What Happens if You Turn Your Back on Hilary Clinton.

Ray McGovern was put on the State Department’s diplomatic security BOLO list – Be On the Look Out – one of a series of proliferating government watch lists. What McGovern did to end up on diplomatic security’s dangerous persons list and how he got off the list are a tale of our era, post-constitutional America.

In 2011, at George Washington University during a public event where Clinton was speaking, McGovern stood up and turned his back to the stage. He did not say a word, or otherwise disrupt anything. University cops grabbed McGovern in a headlock and by his arms, and dragged him out of the auditorium by force, their actions directed from the side by a man whose name is redacted from public records. Photos (above) of the then 71-year-old McGovern taken at the time of his arrest show the multiple bruises and contusions he suffered while being arrested. He was secured to a metal chair with two sets of handcuffs. McGovern was at first refused medical care for the bleeding caused by the handcuffs. It is easy to invoke the words thug, bully, goon.

The charges of disorderly conduct were dropped, McGovern was released and it was determined that he committed no crime.

But because he had spoken back to power, State’s diplomatic security printed up an actual wanted poster citing McGovern’s “considerable amount of political activism” and “significant notoriety in the national media.”

With the documents that so clearly crossed the First Amendment now in hand, the Partnership for Civil Justice Fund went to court. They sought, and won, an injunction against the State Department to stop the Be On the Look-Out alert against McGovern, and to force State to pro-actively advise other law enforcement agencies that it no longer stands.

This is what the wanted poster actually looks like. It’s almost humorous: 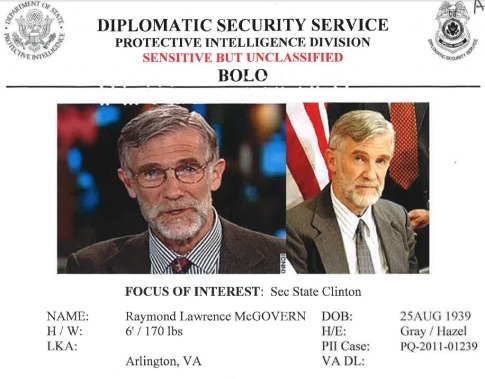 What happens next is particularly interesting, as well as disturbing, considering the fact that McGovern sued and ostensibly was removed from the BOLO list. Nevertheless, the NYPD seemed to be well aware that he was headed to the talk with retired general David Petraeus, and they prevented him from entering the venue.

At 92nd Street Y, which describes itself as a “world-class cultural and community center,” Petraeus was to appear with John Nagl, who recently wrote a book, Knife Fights about being an army tank commander in the Gulf War of 1991. Neoconservative commentator Max Boot was to join them as well.

McGovern, who is 74 years-old, told the guards something to the effect that the Bill of Rights gave him the right to go into the event. McGovern had a ticket too. But the guards would not let him pass and soon New York police officers surrounded him.

According to Marini, his arms were twisted tightly behind his back and he was in immense pain while they were dragging him to the police car. He was squeezed into the back of a patrol car and taken to the 67th Street station.

Rugoff heard him screaming. He was shouting about how they were hurting his shoulder. He asked the officers to stop twisting it so they did not aggravate his shoulder and possibly re-injure it.

The world-class community center has had multiple events featuring Petraeus. It brings in security and the NYPD to effectively protect him from dissent.

“We got to the police station, and they were still dragging Ray around. His watch strap was broken and there was some blood on his wrist,” Rugoff stated.

How security or the NYPD knew McGovern and the other activists by name and that they would be at the event is unknown at the moment. Whether an alert system like the alerts used by the State Department was involved to tip off security to their presence is also unknown as well.

What matters is individuals bought $45 tickets to an event and were effectively denied entry to protect Petraeus and Nagl from having to face possible questions that might challenge their military backgrounds and defense or involvement in war crimes previously committed by US military forces.

This is what the state really thinks of your service, and how you will be treated, the moment you stop being an obedient slave.