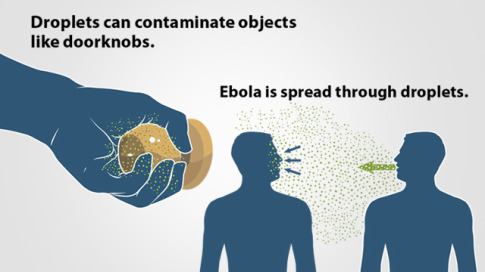 – CDC admits it has been lying all along about Ebola transmission; “indirect” spread now acknowledged (Natural News, Oct 30, 2014):

Defying its own quack advice that the agency has been propagandizing for months, the CDC has now released a document on Ebola that admits the virus can spread through aerosolized droplets. The document, quietly released on the CDC website, also admits Ebola can contaminate surfaces such as doorknobs, causing infections to be spread through indirect means. [1]

Here’s a backup source of the PDF just in case the CDC scrubs it:
www.naturalnews.com/files/infections-spread-…

In other words, the CDC is now admitting it lied all along and that Natural News was correct from day one when we warned you about indirect transmission routes of the Ebola virus. (The CDC has always insisted it could only spread via “direct contact.”)

“Ebola is spread through droplets,” the CDC document now reads. Mirroring exactly what I’ve been telling millions of people in my free audio course at www.BioDefense.com the CDC now says “A person might also get infected by touching a surface or object that has germs on it and then touching their mouth or nose.”

Yeah, we know. In fact, everybody in the independent media has known this for months, while all those who watch mainstream media sources are just now realizing this because they’ve been repeatedly lied to by CDC and NIH spokespeople.

The CDC has offered no apology whatsoever for intentionally misleading the public up to this point. Apparently, lying to the public is such a common activity at the highest levels of the CDC that they don’t think there’s anything wrong with it.

“Droplets can contaminate objects like doorknobs,” the CDC document goes on to admit. This also means that Ebola can contaminate all sorts of surfaces, including ATM keypads, subway car hand rails, airplane tray tables, taxicab door handles and much more.

This also means the CDC’s previous assertion that Ebola could only spread through “direct contact” is utterly false. It’s just one more reason to never trust anything the CDC tells you. (The CDC has already lost tremendous credibility in all this, and it’s going to lose even more before this is finished…)

Just this week, a stunning new scientific study found that Ebola can survive on contaminated surfaces for up to 50 days. This means an infected Ebola carrier like Dr. Spencer could have sneezed on a doorknob or other surface, causing viable Ebola droplets to be deposited there. Another person could have come along and touched the same doorknob, then infected themselves with Ebola by touching their own eyes, nose or mouth.

Dr. Spencer, we have now learned, lied to police and claimed he was “self quarantined” when in fact he was riding the subway and visiting restaurants and bowling alleys. As the NY Post reports: [3]

The city’s first Ebola patient initially lied to authorities about his travels around the city following his return from treating disease victims in Africa, law-enforcement sources said. Dr. Craig Spencer at first told officials that he isolated himself in his Harlem apartment — and didn’t admit he rode the subways, dined out and went bowling until cops looked at his MetroCard the sources said.

CDC still lying about how far a sneeze spreads

The art of lying is so instilled in the culture of the CDC that even when it reveals one stunning truth, it feels compelled to spread another lie at the same time.

In this document that admits Ebola can be spread via aerosolized droplets, the CDC falsely insists those droplets can only travel a maximum distance of 3 feet: