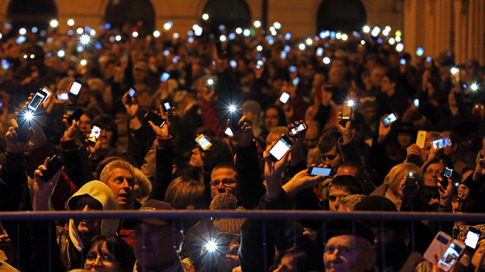 Furious with the government plan to impose tax on Internet data traffic, thousands of Hungarians rallied in front of the Economy Ministry in Budapest to protect the freedom of the internet from the ‘anti-democratic’ measure.

Tens of thousands gathered in front of the Economy Ministry building on Sunday, urging the politicians to scrap the plan that will see internet service providers (ISPs) pay 150 forints ($0.62) for every gigabyte of data traffic transferred over their networks.

Although the draft suggests that ISPs would be able to offset corporate income tax against the new levy, the protesters believe that eventually the new tax burden will end up pinned on common users. The Association of IT, Telecommunications and Electronics Companies has already said the tax would force them to raise prices, Reuters reports.