In late August, we drew the world’s attention to the fact that ISIS had acquired three fighter jets when the Iraqi military ran away. Now, six weeks later, as Reuters reports, having been trained by Iraqi pilots who have joined Islamic State,  a group monitoring the war said on Friday, saying it was the first time that the militant group had taken to the air. 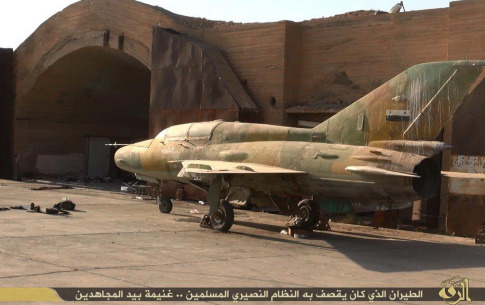 The group, which has seized land in Syria and Iraq, has been flying the planes over the captured al-Jarrah military airport east of Aleppo, said Rami Abdulrahman, who runs the Britain-based Syrian Observatory for Human Rights.

“They have trainers, Iraqi officers who were pilots before for (former Iraqi president) Saddam Hussein,” Abdulrahman said.

“People saw the flights, they went up many times from the airport and they are flying in the skies outside the airport and coming back,” he said, citing witnesses in northern Aleppo province near the base, which is 70 km (45 miles) south of Turkey.

It was not clear whether the jets were equipped with weaponry or whether the pilots could fly longer distances in the planes, which witnesses said appeared to be MiG 21 or MiG 23 models captured from the Syrian military.

Is this why Saudi Arabia was so quick to give in to US pressure to cut oil prices? It’s not far in a fighter jet to Riyadh…

The state department doesn’t want to think about it: