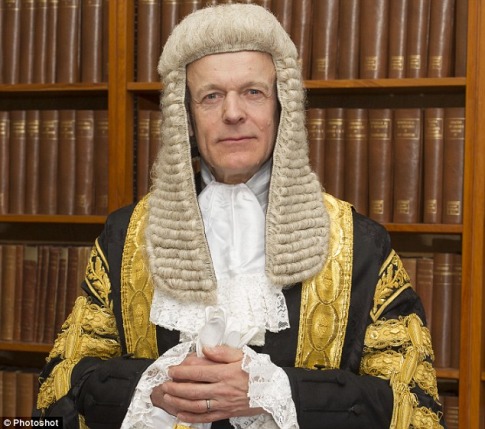 Lord Justice Fulford, pictured in his full legal regalia, was named last year as an adviser to the Queen

– High Court judge and the child sex ring: Adviser to Queen was founder of paedophile support group to keep offenders out of jail (Daily Mail, March 8, 2014):

One of Britain’s most senior judges actively campaigned to support a vile paedophile group that tried to legalise sex with children, The Mail on Sunday can reveal.

Lord Justice Fulford, named last year as an adviser to the Queen, was a key backer of the notorious Paedophile Information Exchange (PIE) which police suspect of abusing children on an ‘industrial scale’.

An investigation by the Mail on Sunday has discovered that Fulford was a founder member of a campaign to defend PIE while it was openly calling for the age of consent to be lowered to just four.

– THIS WEEK IN SEX ABUSE OF CHILDREN BY PEDOPHILE CATHOLIC PRIESTS [OCTOBER 5, 2014]

– The U.K. Political Pedophile Ring Scandal is Just The Tip of the Iceberg – The Full Story is Much More Disturbing [UPDATED] (SCG, News, July 8, 2014)