Yesterday we reported that the biggest riot over the weekend was not in Ferguson (although things there are hardly stable after a local police officer was shot in the violent town overnight) but in Hong Kong, where students and other mostly young people are protesting the recent loss of their democratic vote powers and thus “the loss of their freedom.” Since then things have gotten from bad to worse when late last night Hong Kong declared the start of the Occupy Central disobedience campaign, leading to violent skirmishes with the police, which over the past hour have included the use of tear gas by the police as well as the first outright warning by the cops demanding that the student protesters disperse or risk being fired upon. 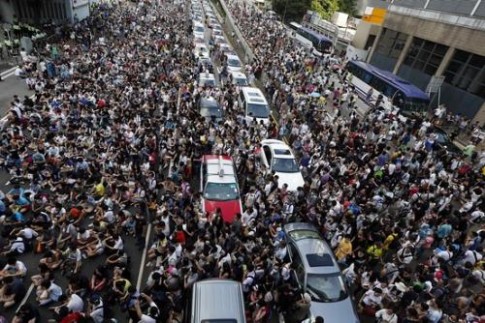 A standoff between police and pro-democracy protesters intensified near where thousands have converged in the past days to demand free elections.

Around 6 p.m., police moved to clear the area, using tear gas against protesters near Hong Kong government buildings that had been blocked off. Protesters streamed away trying to wave away clouds of smoke and holding handkerchiefs against their mouths and noses. Many were running; others were raising their hands above their heads in an indication of nonviolent intent.

Crowds of thousands had gathered in the area through the afternoon, with protesters attempting to build barricades against police. At one point, a few police cars were surrounded by a sea of protesters. “Hong Kong police, you have been surrounded, please leave,” protesters shouted over a sound system.

Police showed red signs urging the activists to stop charging or force would be used. Riot police in helmet shields and face masks were at the site.

After the tear-gas spraying, many protesters who had dispersed regrouped in the Tamar waterfront park where a stage and rows of chairs had been erected ahead of celebrations for China’s National Day on Wednesday.

After spending hours holding the protesters at bay, police lobbed canisters of tear gas into the crowd on Sunday evening. The searing fumes sent protesters fleeing down the road, but many came right back to continue their demonstration.

Students and activists have been camped out on the streets outside the government complex all weekend. Students started the rally, but by early Sunday leaders of the broader Occupy Central civil disobedience movement said they were joining them to kick-start a long-threatened mass sit-in to demand an election for Hong Kong’s leader without Beijing’s interference.

Authorities launched their crackdown after the protest spiraled into an extraordinary scene of chaos as the protesters jammed a busy road and clashed with officers wielding pepper spray.

The protesters were trying tried to reach a mass sit-in being held outside government headquarters to demand Beijing grant genuine democratic reforms to the former British colony.

The demonstrations – which Beijing called “illegal” – were a rare scene of disorder in the Asian financial hub, and highlighted authorities’ inability to get a grip on the public discontent over Beijing’s tightening grip on the city. The protesters reject Beijing’s recent decision to restrict voting reforms for the first-ever elections to choose Hong Kong’s leader, promised for 2017.

Earlier Sunday, thousands of protesters who tried to join the sit-in breached a police cordon, spilling out onto a busy highway and causing traffic to come to a standstill.  Police officers in a buffer zone manned barricades and doused the protesters with pepper spray carried in backpacks. The demonstrators, who tried at one point to rip apart metal barricades, carried umbrellas to deflect the spray by the police, who were wearing helmets and respirators.

Police had told those involved in what they also call an illegal gathering to leave the scene as soon as possible, warning that otherwise they would begin to clear the area and make arrests.

The use of the tear gas angered the protesters, who chanted “Shame on C.Y. Leung” after it was used, referring to the city’s deeply unpopular Beijing-backed leader, Leung Chun-ying. To many, it also seemed to mark a major shift for Hong Kong, whose residents have long felt their city stood apart from mainland China thanks to its guaranteed civil liberties and separate legal and financial systems.

This is madness RT @hkdemonow: #HK Police is warning protestors to leave or they will FIRE! #OccupyCentralpic.twitter.com/cEG4jYXHgs

I have never seen the orange flag before. “Leave or we will shoot” shoot what? pic.twitter.com/F3zu5zN7iv

Orange warning sign fr police: Might shoot to disperse crowd. Instant msg: No one has been shot but police hitting ppl w baton ?????????????

Here id some more commentary from the ground in Hong Kong over the past few hours:

Tear gas was being fired into crowds at close range. pic.twitter.com/HTSjt7nS4l

Finally, here is a live stream from the scene of the action: