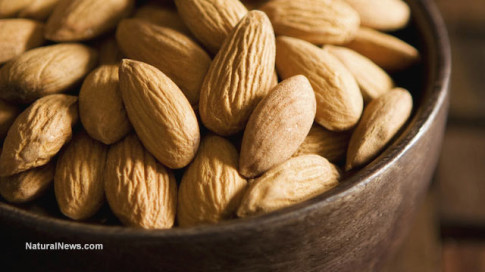 Almond farmers in California’s Central Valley, where about 80 percent of the world’s supply of almonds is grown, are desperate for water. As most of the state hobbles through one of its worst droughts in history, growers are reportedly siphoning off water wherever they can get it, robbing taxpayers and the general public of a shared and increasingly scarce resource that could take many years to replenish.

Though they are fairly drought-resistant, almonds are growing in popularity all over the world. They have exceeded peanuts here in the States as the consumer nut of choice, and developing nations like China are demanding them like never before. This has resulted in the conversion of more than one million acres of the Central Valley into almond orchards, more than twice the amount compared to 1996.

All these additional orchards require water, and growers are taking it from wherever they can, including from underground aquifers that take a very long time to recharge. This is putting tremendous strain on the state’s general water supply, which is on the verge of disappearing. In the end, there will be no water for anyone if the great water draw continues unmitigated, warn experts.

“The people of the state of California are more or less destroying themselves in order to give cheap almonds to the world,” said David Zetland, a professor of economics at Leiden University College in the Netherlands, as quoted by The Guardian.

Almonds are big business, constituting a $4.3 billion annual crop in California. They also don’t grow very well in most other places, as the Golden State has just the right combination of brief, mild winters, warm springs and long, dry summers. These are ideal growing conditions for almonds, and few other places in the world can match them.

Going into its third year of extreme, and in many areas exceptional, drought, California is struggling in some areas to keep the water flowing. Many larger cities have already imposed restrictions on water usage, with fines for residents who use too much. Meanwhile, California’s farmers are freely taking whatever water they need without consequence.

If California’s agriculture industry was still as diversified as it once was, this might be tolerable during these extreme conditions. After all, California has long been known as the “food basket” of the country, supplying more than half of the nation’s supply of fresh produce. It is a major industry, in other words, that supplies jobs and income for California residents.

But the fact of the matter is that much of the industry is now dominated by just a few large players who rake in massive profits from certain key cash crops. These include grapes, cotton, alfalfa and almonds. So while taxpayers are being slapped with fines for using water that is technically theirs to begin with, large agriculture conglomerates are getting away with using as much as they want for free.

“[The farmers] should be repaying what they are taking,” said Richard Howitt, co-author of a recent study that tacks water mismanagement, and not necessarily farmers themselves, as the main culprit in the water crisis.

“If they are taking more [water], as they always are in droughts, then they should be making plans to repay it back in the wet years. If you treat your groundwater [the] way you treat your retirement account, then everything would be OK.”

In defense of the almond industry, the Almond Board of California says that today’s growers are using about 33 percent less water to produce one pound of almonds than they were 20 years ago.