Since China fired its first ‘official’ shot across the Petrodollar bow a year ago, there has been an increasing groundswell of de-dollarization across the world’s energy trade (despite Washington’s exclamations of ‘isolated’ non-dollar transactors). The rise of the PetroYuan has not been far from our headlines in the last year, with China increasingly leveraging its rise as an economic power and as the most important incremental market for hydrocarbon exporters, in the Persian Gulf and the former Soviet Union, to circumscribe dollar dominance in global energy – with potentially profound ramifications for America’s strategic position. And now, as AP reports, for the first time in history, China has docked a Navy Destroyer in the Southern Iranian port of Bandar-Abbas – right across the Straits of Hormuz from ‘US stronghold-for-now’ Bahrain and UAE.

The rise of the PetroYuan has not been far from our headlines in the last year:

Guest Post: From PetroDollar To PetroYuan – The Coming Proxy Wars

And now, as AP reports, for the first time in history, China has docked a Navy Destroyer in a Southern Iranian port of Bandar-Abbas – right across the Straits of Hormuz from ‘US stronghold-for-now’ Bahrain and UAE.

Adm. Hossein Azad, naval base chief in the southern port of Bandar Abbas, said the four-day visit that began Saturday saw the two navies sharing expertise in the field of marine rescue.

“On the last day of their visit while leaving Iran, the Chinese warships will stage a joint drill in line with mutual collaboration, and exchange of marine and technical information particularly in the field of aid and rescue,” said Azad.

The report said the destroyer was accompanied by a logistics ship, and that both were on their way to the Gulf of Aden as a part of an international mission to combat piracy.

Last year a Russian naval group docked in the same port on its way back from a Pacific Ocean mission. 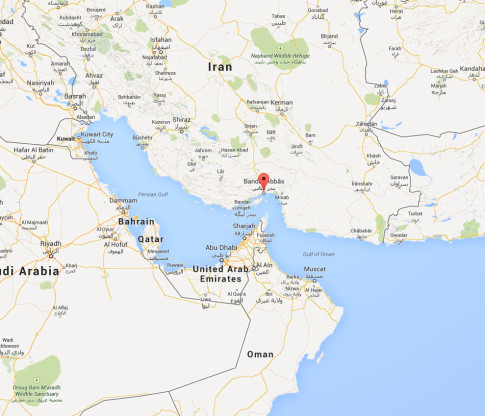 The move is also seen part of off efforts by Iran to strike a balance among foreign navies present in the area near the strategic Strait of Hormuz, the passageway at the mouth of the Persian Gulf through which a fifth of the world’s oil is shipped.

U.S. Navy’s 5th Fleet is based in nearby Bahrain, on the southern coast of the Gulf.

Here’s why it matters… 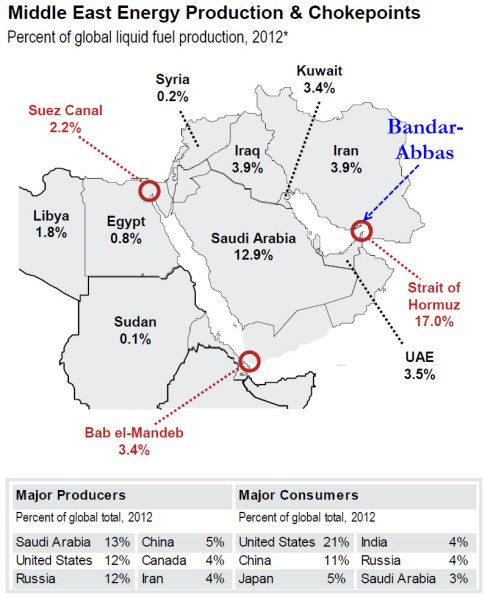 History and logic caution that current practices are not set in stone. With the rise of the “petroyuan,” movement towards a less dollar-centric currency regime in international energy markets—with potentially serious implications for the dollar’s broader standing—is already underway.

As China has emerged as a major player on the global energy scene, it has also embarked on an extended campaign to internationaliseits currency. A rising share of China’s external trade is being denominated and settled in renminbi; issuance of renminbi-denominated financial instruments is growing. China is pursuing a protracted process of capital account liberalisation essential to full renminbi internationalisation, and is allowing more exchange rate flexibility for the yuan. The People’s Bank of China (PBOC) now has swap arrangements with over thirty other central banks—meaning that renminbi already effectively functions as a reserve currency.

Chinese policymakers appreciate the “advantages of incumbency” the dollar enjoys; their aim is not for renminbi to replace dollars, but to position the yuan alongside the greenback as a transactional and reserve currency. Besides economic benefits (e.g., lowering Chinese businesses’ foreign exchange costs), Beijing wants—for strategic reasons—to slow further growth of its enormous dollar reserves. China has watched America’s increasing propensity to cut off countries from the U.S. financial system as a foreign policy tool, and worries about Washington trying to leverage it this way; renminbi internationalisation can mitigate such vulnerability. More broadly, Beijing understands the importance of dollar dominance to American power; by chipping away at it, China can contain excessive U.S. unilateralism.

China has long incorporated financial instruments into its efforts to access foreign hydrocarbons. Now Beijing wants major energy producers to accept renminbi as a transactional currency—including to settle Chinese hydrocarbon purchases—and incorporate renminbi in their central bank reserves. Producers have reason to be receptive. China is, for the vastly foreseeable future, the main incremental market for hydrocarbon producers in the Persian Gulf and former Soviet Union. Widespread expectations of long-term yuan appreciation make accumulating renminbi reserves a “no brainer” in terms of portfolio diversification. And, as America is increasingly viewed as a hegemon in relative decline, China is seen as the preeminent rising power. Even for Gulf Arab states long reliant on Washington as their ultimate security guarantor, this makes closer ties to Beijing an imperative strategic hedge. For Russia, deteriorating relations with the United States impel deeper cooperation with China, against what both Moscow and Beijing consider a declining, yet still dangerously flailing and over-reactive, America.

For several years,China has paid for some of its oil imports from Iran with renminbi; in 2012, the PBOC and the UAE Central Bank set up a $5.5 billion currency swap, setting the stage for settling Chinese oil imports from Abu Dhabi inrenminbi—an important expansion of petroyuan use in the Persian Gulf. The $400 billion Sino-Russian gas deal that was concluded this year apparently provides for settling Chinese purchases of Russian gas in renminbi; if fully realised, this would mean an appreciable role for renminbi in transnational gas transactions.

Looking ahead, use of renminbi to settle international hydrocarbon sales will surely increase, accelerating the decline of American influence in key energy-producing regions. It will also make it marginally harder for Washington to finance what China and other rising powers consider overly interventionist foreign policies—a prospect America’s political class has hardly begun to ponder.