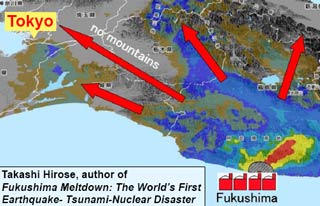 – VIDEO: Radioactive material now flowing toward Tokyo and contaminating their water supply; Problems “actually only getting worse” — “Truth is no one in world really knows how to deal with Fukushima” — Gov’t Expert: Tepco “should give up’ making ice walls (ENENews, Sep 21, 2014):

Dr Ronald McCoy, MD, physician, Sept. 18, 2014 (emphasis added): Experts say that the Japanese government will soon be left with no choice but to release radioactive water into the ocean… The truth is that no one in the world really knows how to deal with the Fukushima accident… Murphy’s Law is inexorable: If anything can go wrong, in time it will go wrong. A major nuclear accident [can] render large areas of land uninhabitable for thousands of years.

Japan Times, Sept 19, 2014: Tepco started building ice walls [but] has been unable to seal the leaks… it hasn’t been able to freeze because the [highly contaminated] water is flowing too fast [from the turbine buildings]. Tepco is trying to figure out how it can seal up the leak[s]… but it is still unclear when it will be able to plug the leaks. [Atsunao Marui, a groundwater expert who is a member of a government panel dealing with the tainted water issue] said Tepco has been spending too much time trying to make the ice walls work, and should give up  and explore other alternatives.

Interview with Yokohama evacuees Beverly Findlay Kaneko and son Ryan, Social Uplift, Sept. 14, 2014 (at 3:00 in): I started working on March 11 this year, 2014, with Libbe Halevy of Nuclear Hotseat and we helped her produce a segment called Voices from Japan (Part 1 | Part 2 | Part 3 | Part 4)… We interviewed probably 12-14 different people, top people in the anti-nuclear and the humanitarian movements, regarding Fukushima… Every last one of those people said here we are 3 years after the disaster and nothing has changed. Nothing has changed except for the fact that the government keeps trying to brush the issue under the rug and cover up… Unfortunately the cleanup up the site has not progressed they are to the point now where there is so much contaminated water collecting at the site that now the only choice they have is to dump it into the Pacific Ocean. The rivers in Fukushima Prefecture were contaminated at the time of the accident. That contamination is now flowing toward the Tokyo area, contaminating the Tokyo water supply. So environmentally things have not gotten better they’re actually only getting worse.

Dr. Ferenc Dalnoki-Veress and Dr. Arjun Makhijani, Asia-Pacific Journal, Dec. 19, 2011: Some of the fuel has reached the concrete floor and may breach it, posing a threat of unremediable contamination of ground water.