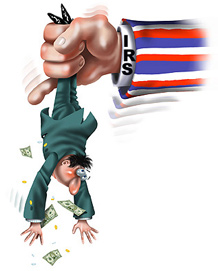 – An Appalling Practice Used In Only Two Nations, Of Which The US Is One (Doug Casey’s International Man):

That’s the story of how Eritrea—a tiny, mostly unheard-of country in East Africa—taxes its citizens who live abroad.

Eritrea is one of only two countries in the entire world that taxes its nonresident citizens on their global income. Specifically, Eritrea levies a flat 2% tax on the income of its citizens who reside abroad.

Nearly every other country in the world bases its tax system on residency rather than citizenship.

This practice has been condemned as “extortion” and a “repressive” measure by an “authoritarian” government by the media.

In fact, even the UN has weighed in. In Resolution 2023, the UN Security Council condemned Eritrea for “using extortion, threats of violence, fraud and other illicit means to collect taxes outside of Eritrea from its nationals.”

You may be thinking, “What’s the controversy? Eritrea is getting criticized, and rightly so.”

To understand the controversy, we have to examine the only other country on the planet that has a similar tax system.

The only other country to tax its nonresident citizens globally is of course the US.

The US essentially does exactly the same thing as Eritrea to its nonresident citizens, except that it’s done on a much bigger scale and with absolutely draconian penalties.

Eritrea’s paltry 2% tax is a mere fraction of the top 39.6% federal tax rate that expat Americans have to pay—even if they earned that income abroad and never set foot in the US. (The US does allow for an exemption of a limited amount of foreign earned income, if strict requirements are met.)

It should also be noted that Eritrea is a poor country and has a very limited capability to actually enforce its 2% expat tax. Many Eritreans who live abroad have never even heard of it, let alone are frightened by it.

The US, on the other hand—being the world’s financial and military superpower (for now at least)—does have the capability to enforce its byzantine tax system literally anywhere in the world. When you consider this capability and the penalties—which can only be described as cruel and unusual—it’s no surprise that US expats are terrified. And they should be… or they aren’t paying attention.

American expats are threatened with prison and outlandish fines merely for not filing a litany of complex forms correctly—even if no taxes are due in the first place.

When you consider the totality of it, it’s not actually a fair comparison to contrast poor little Eritrea and its relatively modest expat tax to the monstrosity of the US system.

Eritrea gets hounded, ostracized, and sanctioned for using—according to the UN—“threats, harassment and intimidation” to “extort” taxes out of its citizens living abroad. You would think there would at least be a peep of criticism for the only other country that does essentially the same thing, but on steroids. But you’d be wrong. If you listen for it, all you will hear are the crickets chirping.

This isn’t surprising, though. Even though it’s clearly a double standard, it’s easy to understand why it exists.

As the world’s sole superpower and issuer of the premier reserve currency, the US is not accountable to anyone. It’s a heck of a lot easier to push around some small, impoverished African country than it is to stand up to the US juggernaut—just ask Canada.

Recently the Canadian government took the drastic step of expelling the head of the Eritrean consulate in Toronto because he had been involved with levying the 2% expat tax on Eritreans living in Canada.

Somehow I don’t expect the Canadian government to give any American officials the boot… even though they’re shaking down vastly more Canadian residents for vastly more money.

Curiously, Canada’s reaction to the US’s expat tax is exactly the opposite of its reaction to Eritrea’s. Rather than taking action to prevent the US government from harassing US citizens living in Canada, the Canadian government has amazingly facilitated it, by complying with the FATCA law—even though it contradicts Canadian law.

It’s always better to face reality than to ignore ugly truths. And the story of Eritrea’s expat tax helps us reveal a big one. Namely that Americans—especially those who live abroad—are living under one of the worst tax systems in the entire world.

A rather ironic situation, when you take a look at history. Americans went from revolting over a comparatively small tax on tea to the system which exists today.

But don’t hold your breath for positive change. At least not as long as the US dollar remains the world’s premier reserve currency. Until then, no other country is going to meaningfully stand up to the US as it forces its tax policies on the rest of the world through things like FATCA.

Likewise, positive change through the US political system is just as unlikely. Most Americans passively accept as “normal” the current tax system. And insofar as they want change, many Americans want more people to “pay their fair share.”

The bottom line is that it’s simply not possible to stop this tsunami.

The best you can do is to educate yourself on your options, and take practical steps to protect you and your family.

Moving some of your savings abroad in the form of offshore bank and brokerage accounts, foreign real estate, and physical gold held in safe jurisdictions will go a long way toward protecting yourself. Obtaining a second passport is an important part of the mix as well.

It’s not all doom and gloom; the world is your oyster, and there are very attractive jurisdictions that are cause for optimism. That’s what International Man is all about—making the most of your personal freedom and financial opportunity around the world.

Be sure to get the free IM Communiqué to keep up with the latest on the best strategies.

1 thought on “An Appalling Practice Used In Only Two Nations, Of Which The US Is One”