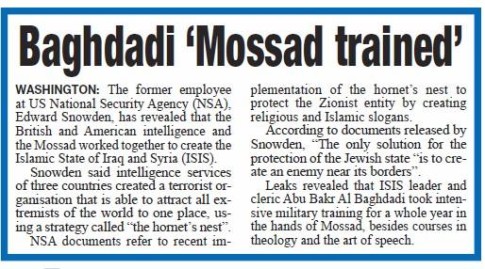 We can hear the narrative now… how can Congress turn down President Obama’s demands for $5 billion to pay for a ‘counter-terrorism’ fund that could be used to support operations against Islamic State targets in Iraq and Syria… if they do, are they not supporting terrorism? As The Hill reports, White House press secretary Josh Earnest floated the $5 billion counterterrorism fund as something that “would strengthen the hand of this president and future presidents for dealing with urgent situations like this.” We await Wednesday night’s unveiling of the long-awaited strategy…

White House press secretary Josh Earnest floated the $5 billion counterterrorism fund as something that “would strengthen the hand of this president and future presidents for dealing with urgent situations like this.”

Earnest offered comments Monday in response to questions about what Obama’s message would be to congressional leaders headed to the White House on Tuesday.

“This is a core component of the president’s strategy for dealing with this and other issues like it around the globe; that is, additional resources that can be used by the United States to build up effective partners so that when the United States has to confront threats like this, that we have well-trained, well-equipped, effective partners that we can work with to confront these problems,” Earnest said.

The White House cautioned that the president has not made a final decision on whether to expand military operations against the Islamic State in Iraq and Syria (ISIS). As a result, no final decisions have been made on how operations could be expanded.

The strategy is coming…

The following day, Obama is to address the public on his plans for ISIS, which over the past month has executed two American journalists while threatening the United States.

Over the weekend, Obama told “Meet the Press” that he was already “confident that I have the authorization that I need to protect the American people.”