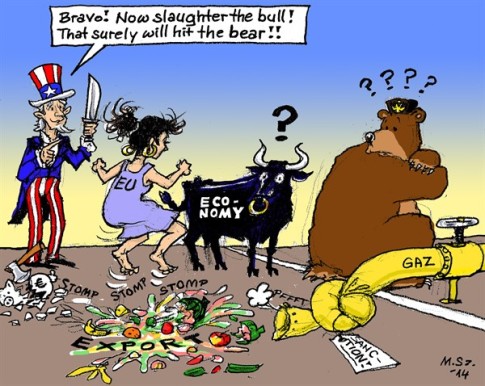 Russia’s Gazprom Bank and oil producer Gazprom Neft will fall under new sanctions approved by the European Union on Friday, Reuters cited an EU diplomat as saying. The sanctions reportedly include a new ban on raising capital in the 28-nation bloc.

The sanctions were agreed against Russia for its alleged role in the Ukrainian crisis, the diplomatic source said.

According to The Financial Times, which managed to obtain a document outlining the sanctions, all Russian state-controlled companies with assets of more than one trillion rubles (US$27 billion) that receive more than half their revenue from “the sale or transportation of crude oil or petroleum products” will be hit by the ban.

In addition to Gazprom Neft, the oil subsidiary of Russian gas giant Gazprom, Russia’s largest oil group – Rosneft and Transneft pipeline company – would be potentially blacklisted. However, the sanctions will not apply to privately owned Russian oil groups such as Lukoil and Surgutneftegas, the Times said.

The sanctions will also include an expansion of the EU travel ban list against certain individuals, as well as asset freezes, credit restrictions against Russian companies, and export bans on dual use goods, the EU diplomat told the agency.

Chiefs of Russian companies will be added to the list, along with oligarchs and local authorities of Donbass and Crimea.

Moscow has already promised it will respond to the new round of sanctions if they are approved and imposed, according to a press release issued by the Russian Foreign Ministry on Saturday

“Instead of feverishly looking for ways of hitting harder the economies of its member-states and Russia, the EU would do better to start supporting the economic revival of the Donbass region and restoring normal life there,” the press release reads.

The EU’s implementation of the new sanctions was delayed until Monday, Itar-Tass quoted an EU source as saying. Although the sanctions are ready, “some touch up work will be completed during the weekend.”

US President Barack Obama said on Friday that Washington and the European Union were prepared to impose sanctions against Russia if the crisis in Ukraine continues to escalate following the signing of a ceasefire agreement.

Obama said the ceasefire in eastern Ukraine – agreed upon only hours earlier – was a result of “both the sanctions that have already been applied and the threat of further sanctions, which are having a real impact on the Russian economy and have isolated Russia in a way we have not seen in a very long time.”

Kiev officials and representatives of the two self-proclaimed republics in southeastern Ukraine agreed to a ceasefire after the contact group met behind closed doors in Belarus.