While NATO is contemplating its existential purpose in a world where the Cold War has suddenly come back with a vengeance, and the military alliance has found itself woefully unprepared to deal with a Russia which no longer accepts the supremacy of the west (appropriately enough doing all of this on a golf course), Russia is also strategizing, only instead of issuing “sharply-worded catchphrases” and hashtags, a Russian general has called for Russia to revamp its military doctrine, last updated in 2010, to clearly identify the U.S. and its NATO allies as Moscow’s enemy number one. That in itself is not disturbing: we reported as much yesterday and is merely more rhetorical posturing. Where things, however, get very problematic is that the general demands that Russia spell out the conditions under which the country would launch a preemptive nuclear strike against the 28-member military alliance. 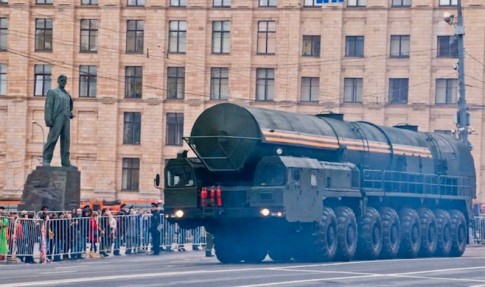 Moscow Times reports that Russia’s military doctrine, a strategy document through which the government interprets military threats and crafts possible responses, is being revised in light of threats connected to the Arab Spring, the Syrian civil war and the conflict in Ukraine, the deputy chief of the Kremlin’s security council told RIA Novosti on Tuesday.

That however is the soundbite for politically correct media purposes. Because within the Defense Ministry there are voices calling for different priorities.

“First and foremost, the likely enemy of Russia should be clearly identified in this strategic document, something absent from the 2010 military doctrine. In my view, our primary enemy is the U.S. and the North Atlantic bloc,” General Yury Yakubov, a senior Defense Ministry official, was quoted as saying by Interfax.

If this sounds like a statement taken right out of the (first) Cold War, one involving the whole nuclear arms race, is because it is. The 2010 doctrine defines NATO expansion as a threat to Russian national security and reaffirms its right to use nuclear weapons in a defensive posture, but stops far short of declaring NATO as Moscow’s primary adversary and laying preemptive nuclear strike scenarios on the table, a posture unmistakably reminiscent of the Cold War.

At the basis of this dramatic escalation is none other than Russia’s stated response to what it perceives as a clear expansionary NATO threat.

Yakubov said the information war being waged over the crisis in Ukraine — where the West accuses Russia of arming separatists fighting the government in Kiev — and NATO’s announcement that it would establish a permanent military presence in Eastern Europe have validated earlier fears that the alliance’s claims of non-aggression toward Russia were insincere.

And the punchline: the general added that special attention should be paid to integrating the functions of the newly created Air and Space Defense Forces with Russia’s land, sea and air based nuclear forces. “In addition, it is necessary to hash out the conditions under which Russia could carry out a preemptive strike with the Russian Strategic Rocket Forces,” he said.

One can be certain that this is precisely what Russia will do.

Which it did less than a year ago, long before the Ukraine civil war was headline news every day. This is what happened the last time Russia flexed its nuclear deterrence muscles, in November of 2013.

Russia has stationed missiles with a range of about 500 kilometers in its Kaliningrad enclave and along its border with the Baltic states of Estonia, Latvia and Lithuania, Germany’s Bild-Zeitung reports, citing defense officials it didn’t identify. Satellite images show a “double-digit” amount of mobile units identified as SS-26 Stone in NATO code. Missiles were stationed within the past 12 months. SS-26 can carry conventional as well as nuclear warheads.

This is merely Russia being true to its warning word. From April 2012:

Moscow reiterated on Tuesday it may deploy Iskander theater ballistic missiles in the Baltic exclave of Kaliningrad that will be capable of effectively engaging elements of the U.S. missile defense system in Poland.

NATO members agreed to create a missile shield over Europe to protect it against ballistic missiles launched by so-called rogue states, for example Iran and North Korea, at a summit in Lisbon, Portugal, in 2010.

“However, if it is modernized…it could affect our nuclear capability and in that case a political decision may be made to deploy Iskander systems in the Kaliningrad region,” he said in an interview with RT television.

“But that will be a political decision,” he stressed. “So far there is no such need.”

A little over two years later, there is a need. 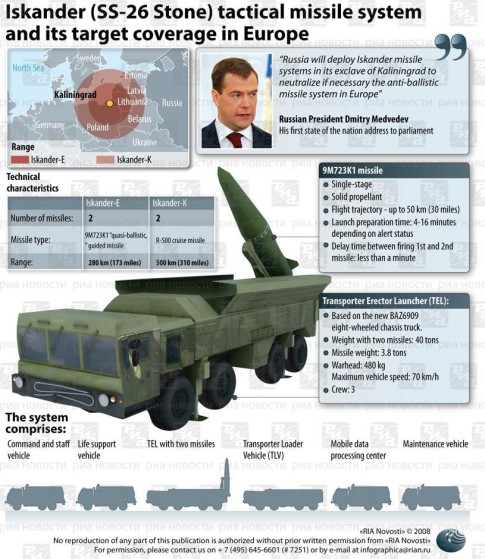 Which means forget “little green men” in Ukraine. Think massive Russian Iskander ICBM systems planted on the border with Poland, Ukraine, the Baltics and all across Russia Western border, and the furious screamfest this would waterfall into.