Though news on the Ebola virus has been muted since two American health care workers were admitted to U.S.-based facilities last month, the deadly contagion continues to spread. According to the World Health Organization more than 40% of all Ebola cases thus far have occurred in just the last three months, suggesting that the virus is continuing to build steam.

Physicist Alessandro Vespignani of Northeastern University in Boston is one of several researchers trying to figure out how far Ebola may spread and how many people around the world could be affected. Based on his findings, there will be 10,000 cases by September of this year and it only gets worse from there. 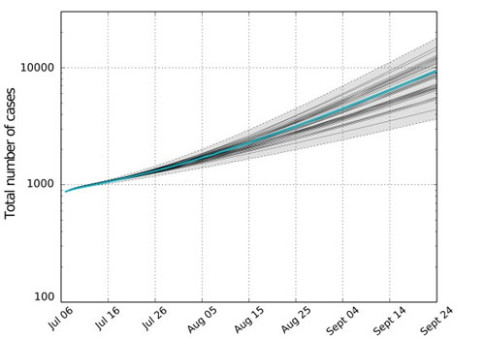 (A model created by Alessandro Vespignani and his colleagues suggests that, at its current spread, Ebola may infect up to 10,000 people by September 24. Other models suggest up to 100,000 infected globally by December of this year. The shaded area is the variability range.)

Extrapolating existing trends, the number of the sick and dying mounts rapidly from the current toll—more than 3000 cases and 1500 deaths—to around 10,000 cases by September 24, and hundreds of thousands in the months after that. “The numbers are really scary,” he says—although he stresses that the model assumes control efforts aren’t stepped up. “We all hope to see this NOT happening,” Vespigani writes in an e-mail.

Vespignani is not the only one trying to predict how the unprecedented outbreak will progress. Last week, the World Health Organization (WHO) estimated that the number of cases could ultimately exceed 20,000. And scientists across the world are scrambling to create computer models that accurately describe the spread of the deadly virus. Not all of them look quite as bleak as Vespignani’s. But the modelers all agree that current efforts to control the epidemic are not enough to stop the deadly pathogen in its tracks.

“If the epidemic in Liberia were to continue in this way until the 1st of December, the cumulative number of cases would exceed 100,000,” predicts Althaus. Such long-term forecasts are error-prone, he acknowledges.

Vespignani has analyzed the likelihood that Ebola will spread to other countries. Using data on millions of air travelers and commuters, as well as mobility patterns based on data from censuses and mobile devices, he has built a model of the world, into which he can introduce Ebola and then run hundreds of thousands of simulations. In general, the chance of further spread beyond West Africa is small, Vespignani says, but the risk grows with the scale of the epidemic.

Ghana, the United Kingdom, and the United States are among the countries most likely to have an introduced case, according to the model.

Source: Science Mag and WHO via Investment Watch

Though researchers and officials hope that this is “not happening,” the fact is that Ebola spread has only increased since it was first identified earlier this year. And now it is spreading to densely populated African cities like Lagos, Nigeria.

The Centers for Disease Control and US-based hospitals maintain that the likelihood of Ebola spreading to the United States remains “extremely low,” but that hasn’t stopped them from preparing infection control protocols because of the extremely high fatality rates associated with those who contract the virus.

Hospitals throughout Southern California are preparing for potential Ebola cases, even as they seek to reassure patients and health care workers that the risk is very low.

Public health officials say with the right isolation and infection control procedures, all hospitals could safely handle a patient with Ebola without exposing staff or other patients.

“We have the infrastructure anyway because we see these things on a daily basis. We see tuberculosis, influenza, potentially measles, and whooping cough,” said Dr. Zachary Rubin, medical director of clinical epidemiology and infection prevention at UCLA. “Even though Ebola is in the news, this is something we do day in and day out.”

The CDC’s Ebola recommendations for hospitals include an array of measures such as private rooms for patients, protective coverings for staff, and limiting use of needles as much as possible to prevent transmission.

“In the context of overall diseases, the likelihood of Ebola even coming to the U.S. or to UCI Medical Center is so extremely low, we just don’t expect it to happen,” Gohil said.

“However, the fatalities are so high and the possibility of travel in the global context is just enough that we have to prepare. One of the reasons you want to prepare is to reassure your staff and your patients that it’s perfectly handleable.”

Public health officials say with the right isolation and infection control procedures, all hospitals could safely handle a patient with Ebola without exposing staff or other patients.

Experts say the virus doesn’t spread like the flu or measles because it is not airborne. However, there are some indications that current strain of the Ebola virus may be mutating. Last month a warning issued by the CDC claimed that infectious Ebola materials could be spread through the air.

The advisory urges airline staff to provide surgical masks to potential Ebola victims in order “to reduce the number of droplets expelled into the air by talking, sneezing, or coughing.”

The CDC is also directing airline cleaning personnel to, “not use compressed air, which might spread infectious material through the air.” (emphasis mine).

The CDC’s concern about the Ebola virus being spread via the air is understandable in light of a 2012 experiment conducted by Canadian scientists which proved that, “the ebola virus could be transmitted by air between species.”

At this time it is too early to tell if efforts by health officials in Africa, Europe and the USA will be effective in stopping the virus. All indications suggest it will continue to spread, just as it has for nearly a year.

The disease models, which are based on population density and mobility patterns, show that it is only a matter of time before an infection is identified in the United States.

In the event that a single person in the Western hemisphere acquires it, then chances are there will be more.

Hospitals in the United States may be preparing isolation protocols, but what about Mexico, where the southern border has been left completely exposed? With cramped quarters on trains and trucks carrying hundreds or thousands of migrants, and unsanitary conditions, it is quite possible that a single infected individual could pass the virus on to scores of others, who in turn would disperse to various cities as soon as they reached US-soil.

And that doesn’t even include the millions of travelers arriving and departing at US airports from coast to coast on a daily basis.

The CDC and US healthcare officials may think they can control it, but all such efforts around the world have failed thus far.

Moreover, should an Ebola outbreak occur in the United States, the panic it will cause may exceed what we saw during the H1N1 flu scare several years ago. Over 25% of American adults fear that the virus could spread to a family member or close friend because of its high fatality rate. This suggests that any indication of contagion on US shores will lead to a run on medical supplies once the virus becomes reality here at home.

The healthcare system could be overwhelmed and medical supplies could feel a serious crunch as panicked Americans race to acquire everything from WHO recommended N-100 masks to protective body suits.

The best prevention will start at home and being positioned with pandemic supplies before such a crisis will be critical, as noted by The Prepper’s Blueprint author Tess Pennington. Some of the supplies she recommends can be purchased now – before the panic – at your local grocery, hardware store, or online.

Pennington recommends getting ready for not just infection prevention, but the overall effect it will have on businesses and government operations.

Having first hand knowledge of the government’s protocols before this type of emergency arises can help put you ahead of the game. Understanding that our lives will change drastically if the population is faced with a pandemic and being prepared for this can help you make better choices toward the well being of your family. Some changes could be:

Among her instructions for creating a sick room, Tess recommends a basic supply list.

We can never be 100% certain of the outcome, especially when dealing with outliers like pandemics. But chances are that government emergency responders will be swamped, grocery stores will be empty, and the majority of people will have no idea what to do.

We can, however, prepare ourselves with basic supplies and the knowledge necessary to increase our ability to prevent contagion reaching those closest to us and staying safe should such an outbreak take hold.

2 thoughts on “U.S. Preps For Ebola Outbreak: Cases May Exceed 100,000 By December: ‘The Numbers Are Really Scary’”