And yet the locals seem happy: 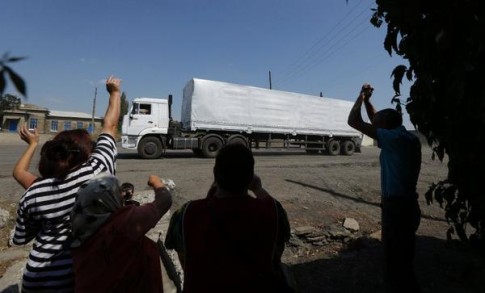 Update 2: All trucks are now in Ukraine:

All the trucks have crossed the border and are now in Ukraine. We are back in Russia.

Update: the farce is complete, although at least this time it didn’t take Ukraine several hours to fabricate then unfabricate its plot line, because literally minutes after it accused Russia of invading, Ukraine’s foreign minister said the convoy was “allowed” to avoid provocations. He added that the rebel militants are using mortars on the convoy route and that it had taken all necessary steps to ensure cargo safety but that Russia wouldn’t discuss security for the convoy.  Nonetheless it still accused Russia’s convoy of breaking international law and said that convoy would go to separatists, not civilians, and called on its “international partners” (we suppose it means the CIA here, which apparently is feeding it this ridiculous script) to condemn the Russian convoy.

Translation: it will accuse “rebels” of a direct attack on the Russian convoy when it happens, blaming Russia for trying to stage an attack so Russia has a provocation pretext to really invade, as opposed to the fake “invasion” Ukraine accused Russia of just moments ago.

In other words, the “MH17 scenario” is now in play, with the question not so much if and who “provokes” the Russian convoy in the coming days, but how Russia will react to it. It appears that contrary to expectations, today will be another trading session in which the main catalyst will be not Jackson Hole but Ukraine once again, as algos react, in an already illiquid market, with extended momentum to each and every contradictory headline.

Finally, with a scenario evolving in such a farcical and chaotic fashion, one wonders if John Kerry somehow managed to sail his sailboat into Kiev and is currently giving the Ukraine government the play by play.

Here we go again. Precisely a week after the fabricated headlines last Friday that Ukraine had blown up Russian military vehicles in Ukraine territory, “news” which promptly was forgotten when Russia denied and Ukraine couldn’t produce any proof of said attack, now it is time for the real “humanitarian” convoy to become the topic du jour, and so it did a few hours ago when some 90 trucks from the convoy were said to have entered Ukraine territory, a move which Ukraine promptly denounced as a direct invasion.

A clip of the Russian trucks entering Ukraine via AP:

The reason for the convoy movement came overnight when the Russian Foreign Ministry said Ukraine seems to be seeking military victory by country’s independence day, “deliberately” delaying delivery of humanitarian aid.  Russia added that is sees no reason to delay further, and the aid convoy starts moving toward Luhansk.  “We warn against any attempts to halt solely humanitarian mission” that was prepared transparently with cooperation from Ukraine, Red Cross, ministry says.

RT adds that Russia said it had met all imaginable and unimaginable demands, including handing exhaustive lists of cargo details to the Red Cross, and that Kiev was inventing new pretexts each day for delaying humanitarian convoy, while the Red Cross reportedly said it was frustrated with Kiev in letting the convoy into Ukraine. That said, because it could not obtain security assurances, the Red Cross would not accompany the Russian convoy.

It is this perhaps why moments ago, Interfax (the Ukraine version that is) blasted the following headline via Bloomberg:

This promptly resulted in a drop in S&P 500 futures fall 0.3% to 1983.40, Stoxx Europe 600 falls 0.6% to session low after the Interfax report that Ukraine sees Russian aid convoy as invasion.

Expect much more disinformation out of Ukraine over the next few. hours as last Friday plays out once again.

Here is Reuters with the full report:

Ukraine declared on Friday that Russia had launched a “direct invasion” of its territory after Moscow sent a convoy of aid trucks across the border into eastern Ukraine where pro-Russian rebels are fighting government forces.

Moscow, which has thousands of troops close on the Russian side of the border, warned against any attempt to “disrupt” the convoy but did not specify what action it was prepared to take if Kiev’s forces intervened.

Kiev, for its part, said Ukrainian forces would not attack the convoy and had allowed it to pass to avoid “provocations”.

“Ukraine will liaise with the International Committee of the Red Cross so that we, Ukraine, are not involved in provocations (accusations) that we have been holding up or using force against the vehicles of so-called aid,” he told journalists.