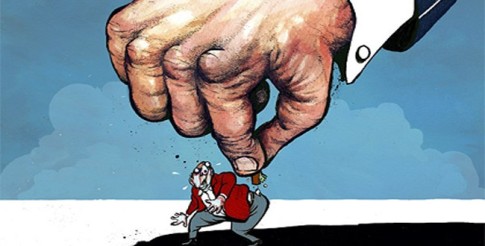 – Is Portugal Next In Line For Wealth Confiscation? (Doug Casey’s International Man, Aug 22, 2014):

The pattern should be seared in your memory by now. If you fail to recognize it, you could be struck with a huge financial blow.

It’s a pattern that has played out over and over throughout history: a government gets into financial trouble, then denies there’s a problem, which is followed by a surprise wealth grab.

That’s exactly what happened when bank deposits in Spain and Cyprus were raided. We’ve also seen retirement savings confiscated in some form in Poland, Portugal, and Hungary. Capital controls have been imposed in Cyprus and Iceland.

Of course these aren’t the only examples of blatant government thievery. These examples are just within Europe and just within recent years. They can and will happen anywhere.

These events highlight the need to use international diversification to mitigate your political risk—the risk that comes from governments.

I think they also give us some clues as to what country is next on the chopping block.

A Roadmap to Confiscation

Like when the president of Cyprus promised that bank deposits would be safe. A promise that we all know turned out to be worthless. Another example of why you’re almost always better off believing the opposite of whatever the government says, especially in a crisis.

Deceptions like this don’t happen by accident. The politicians and media deliberately lull the people into complacency so that they can optimize their forthcoming theft.

The next thing that happens needs to come as a surprise, otherwise it loses its effectiveness. It starts with a bank holiday or capital controls. It’s usually optimal—from the government’s view—to impose these measures on weekends or during a holiday to catch people off guard. They need the element of surprise or else people would take protective measures, like moving their money abroad and safely out of reach.

Once the banks are closed and capital is trapped, the government is free to confiscate as much wealth as it can get away with. It doesn’t matter what they call it or how they do it, the bottom line is they are making an unscrupulous grab. Capital controls are usually kept in place after the grab to prevent the remaining money from fleeing further slaughter.

So don’t forget the pattern:

I think Portugal is a ripe candidate for being the next country to fall into this pattern.

BES is no ordinary bank. The Espírito Santo family, which owned the bank and a large empire of companies in Portugal and abroad, has been described as Portugal’s Rockefellers.

BES was quickly bailed out by the Portuguese government, the EU, and the IMF.

When I read about the incident in the mainstream financial media, most outlets refused to use the word “bailout.” Instead, it seemed that someone handed down the order to describe the event as a “rescue.” Such a concerted effort to coordinate talking points seems to me to be an Orwellian attempt to make this incident seem less objectionable, and perhaps to help conceal the real nature of Europe’s continued economic problems.

The fact that such a huge fraud at such a significant bank for so long escaped the notice of regulators—which supposedly had kept a close watch on Portugal due to a prior crisis in 2011—has reinforced fears that the banks and banking systems of the PIIGS countries (Portugal, Italy, Ireland, Greece, and Spain) are not as good as they seem.

So looking at our roadmap to confiscation, Portugal is clearly at the first stage in the pattern—serious financial trouble.

We also have government officials telling us everything is OK when it is probably too early to declare victory. Mario Draghi, the head of the ECB, recently stated that the collapse of BES “affected neither the banking sector in Portugal, nor Portugal at large, nor other markets.” It’s reminiscent of how, prior to the crisis in Cyprus, government officials were assuring everyone that there was nothing to worry about. Portugal also seems to be at stage two of our confiscation roadmap.

So in short we have another serious financial mess in Portugal. It occurred right under the noses of the regulators who were supposedly keeping a close watch on the country from a prior bailout and crisis in 2011. We have the media sugarcoating the incident, and government officials telling us everything is fine.

To me, it smells like a wealth confiscation in Portugal is just around the corner.

Get Out Before They Close the Window

If you have any money in a Portuguese bank, I think it’s clear that now is the time to head for the exits while you still can.

When it comes to protecting yourself from confiscations, capital controls, bank holidays, and other desperate measures of an out-of-control government, it’s absolutely essential to take action before it’s too late.

Unless you’re part of the political elite, you won’t know exactly when the window of opportunity will slam shut. In Cyprus, that moment came on an ordinary Saturday morning—to surprise as many people as possible before they could take defensive action.

While the window is still open for those in the US to protect themselves, the warning signs are clearly there. And the writing is on the wall.

It’s only logical to find ways to protect yourself. Moving some of your savings outside of the immediate reach of your home government and into a competently run jurisdiction with relatively sound banks makes sense no matter what happens.

Fortunately you can do this from the comfort of your own living room, by opening offshore bank and brokerage accounts remotely.

Naturally, things can change quickly. New options emerge, while others disappear. This is why it’s so important to have the most up-to-date and accurate information possible. That’s where International Man comes in. Be sure to get the free IM Communiqué to keep up with the latest on the best international diversification strategies.