[Moreover Russia’s last ruling monarch of the Romanov family Tsar Nicholas II, together with his wife Tsarina Alexandra and their five children Olga, Tatiana, Maria, Anastasia, and Alexei were executed on 17 July 1918. Subliminal message to Putin? No doubt it’s another “coincidence”]

So “17s” are everywhere.  To be sure, though, each of the items in the last paragraph is easily ranged under the heading “coincidence.”

With the Illuminati there is no such thing as a coincidence.

The Illuminati were behind the Russian revolution.

… and they are telling those, that have the eyes to see and the ears to hear, what they are up to in advance.

(And there is a reason for that, too. And it’s NOT arrogance.)

I’ve told you that they have planned WW3 and it seems that we are moving closer (fast).

– Malaysian Airlines MH370 and MH17. A Criminologist Questions: What are the Probabilities? Is it a Mere Coincidence? (Global Research, July 20, 2014):

Western Mainstream Media (MSM) hastened–on the basis of very thin evidence joined with the refusal to even mention other evidence–to attribute blame to the “appropriate” party, which in the case of flight 17 happens to be Vladimir Putin.

Careful observers of the mainstream media processes are well aware that this sort of thing is what we are to expect, and undoubtedly helps explain the very low level of trust people place in MSM institutions.

Here, of course with the leave of figures such as Anderson Cooper and Barack Obama, we are going to do some of our own thinking about, and analysis of, certain key pieces of evidence.  In so doing, we should not be surprised if we arrive at conclusions different from that which our Ruling Class masters would have us believe.

Of the three “possible” scenarios McFarland presents (and one wonders exactly what scenarios are supposed to be impossible), McFarland (and many others) appears to favor the prospect that pro-Russian rebel separatists are responsible.  The theory is that motive and opportunity coincide in that group better than they do with respect to other potential malfeasants.

Maybe the separatists are responsible.  But the case is hardly closed, and plenty of evidence that people such as McFarland choose to ignore should be considered as objectively as possible.

First, similar to Malaysia Airlines flight 370, there is evidence that contact with Malaysia Airlines flight 17 was lost in advance of the wayward event. Next, and once more like flight 370, we have evidence that the pilot of Flight 17 actually diverted–purportedly on the basis of a vague sense of being “uncomfortable”–the craft into the dangerous warzone region where it was shot down.

Next, reflect that, on the same day, 55 planes flew over Donetsk just as flight 17 did and that these flight patterns have been in place for some time.

The Normal MH17 Flight Path vs. the Warzone flight path over Donesk Oblast on July 17th

And here is evidence reported by Zero Hedge that may be very important:

“While there are various questions that have already emerged from what was supposed to be Ukraine’s “slam dunk” proof confirming Russian rebel involvement in today’s MH-17 tragedy, perhaps one just as gaping question emerges when one looks at what is clearly an outlier flight path in today’s final, and tragic, departure of the Malaysia Airlines Boeing 777.

Perhaps the best visualization of what the issue is, comes from Vagelis Karmiros who has collated all the recent MH-17 flight paths as tracked by Flightaware and shows that while all ten most recent paths pass safely well south of the Donetsk region, and cross the zone above the Sea of Azov, it was only today’s tragic flight that passed straight overhead Donetsk.” 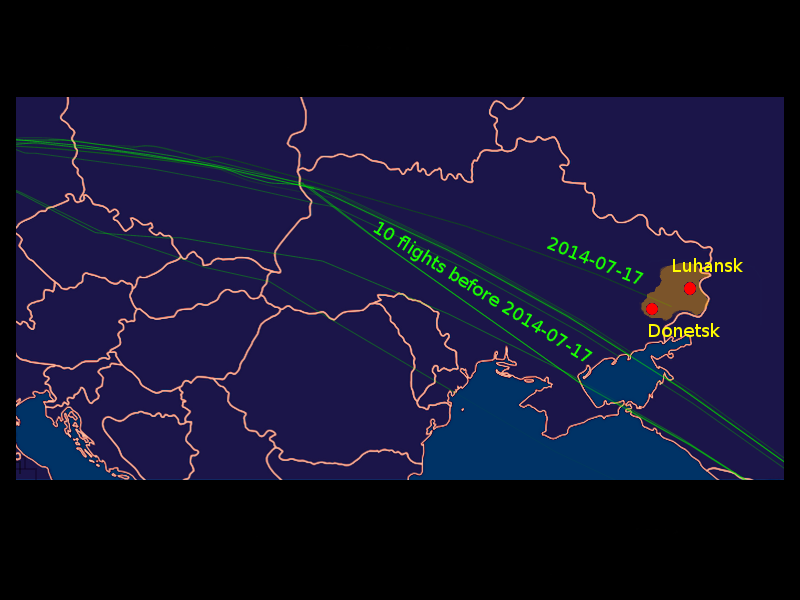 The Karmiros evidence could of course be wrong, but can we prove that it is wrong now, and can we be 100% confident that what the MSM tells us is true?

And, if it’s wrong, why hasn’t the Karmiros evidence been refuted?  The answer to that is that it’s probably because it hasn’t received any discussion.  Why not?

Next, here are a few other curious tidbits.  The flight 17 crash shares an anniversary with the demise of TWA 800, which AT’s own Jack Cashill has compellingly argued was, in fact, brought down by a missile on July 17, 1996 and subsequently covered up by the US government.  And, the maiden flight of flight 17 occurred in 1997 on the date of, you guessed it, July 17.

[Moreover Russia’s last ruling monarch of the Romanov family Tsar Nicholas II, together with his wife Tsarina Alexandra and their five children Olga, Tatiana, Maria, Anastasia, and Alexei were executed on 17 July 1918. Subliminal message to Putin? No doubt it’s another “coincidence”]

So “17s” are everywhere.  To be sure, though, each of the items in the last paragraph is easily ranged under the heading “coincidence.”

But before we do that, there is one more piece of evidence to consider.  Upon having done so, we will synthesize all of the evidence by thinking in terms of probabilities.

There is evidence at YouTube that seems to indicate that CNN recently used footage of a helicopter downing in Syria and represented it as depicting the downing of a helicopter, by pro-Russian forces, in the Ukraine (go to 2:39 for a photo comparison).

Now to the probabilistic summary.

Reasoning with probabilities is notoriously tricky, so we have to proceed carefully.  Fortunately, a simple coin flip analogy can be employed.  If you flip a fair 50/50 coin twice, four possible sequences can occur, and each has an equal likelihood of occurring {HH, HT, TH, TT}.  The equal likelihood of the possible sequences flows from the standard supposition that the coin flips are independent of one another, which is simply to say that an H on flip 1 says nothing about whether flip 2 will produce an H or a T.

The analogy with MH 17 is as follows.  If five months ago (before the vanishing of MH 370) you had contemplated the likelihood that the next two major airline disasters to receive massive global coverage would each involve Malaysia Airlines, you would have been justified in concluding that the likelihood was very low indeed.  By analogy, it would be like specifying only an {H, H} sequence as the outcome ahead of time (a {T, T} sequence would represent the same airline as having been involved, but not Malaysia Airlines).

Now what the Western mainstream media are implicitly arguing is that MH 370 and MH 17 have no real link and are only connected with massive airline disasters in recent months by chance; they’re saying that it could just as well have been any two flights so linked (by analogy, {H, H} or {H, T} or {T, H} or {T, T}).  If this argument is valid, nothing at all should be made at all of the fact that Malaysia Airlines was involved in both instances, since all possible sequences are accounted for and no sequence is much more likely than any other.

And yet, the evidence presented in this article suggests that MH 370 and MH 17 are linked in ways that might not be due to chance.  Both MH 370 and MH 17 appear to have lost communicative contact, and both appear to have veered off course on very unusual routes.  How many aircraft of other airlines have done so in recent months, never mind how many of the 55 aircraft over Donetsk did so on July 17?  How many aircraft other than MH 17 had their inaugural voyage on the date of July 17?

These considerations suggest that, in fact, in the cases of MH 370 and MH 17 we might not be dealing with a “fair coin.”

In turn, the following very reasonable question presents itself: was Malaysia Airlines in particular targeted on July 17, and, if so, what ragtag rebel would have even been in a position to do that (especially given the route alteration, if true), and, if so, how did they accomplish it?

One suspects that the MSM will completely ignore these considerations and will likely coalesce, for several reasons, around an account that blames the episode on an accidental discharge that Putin can nonetheless be blamed for given the hostilities in the region.

However that may be, one thing is almost certainly true: the likelihood that Western MSM would in any way, shape, or form discuss evidence implicating U.S. aligned interests in the demise of MH 17 is virtually nil, no matter how compelling such evidence might be.

Dr. Jason Kissner is Associate Professor of Criminology at California State University. Dr. Kissner’s research on gangs and self-control has appeared in academic journals.  His current empirical research interests include active shootings.   You can reach him at crimprof2010@hotmail.com.

11 thoughts on “Malaysian Airlines MH370 And MH17. A Criminologist Questions: What are the Probabilities? Is it a Mere Coincidence?”