“It’s just going to be screwed. And relatively quickly,” warns Tim Barnett, of the Scripps Institution of Oceanography, telling The Telegraph, the situation in Las Vegas is “as bad as you can imagine”. After a devastating, 14-year drought drained the reservoir that supplies 90% of the city’s water, the apparently endless supply of water is an illusion as Las Vegas population has soared. As Barnett ominously concludes, “unless it can find a way to get more water from somewhere, Las Vegas is out of business. Yet they’re still building, which is stupid.”

As The Telegraph reports, as with many things in Sin City, the apparently endless supply of water is an illusion.

America’s most decadent destination has been engaged in a potentially catastrophic gamble with nature and now, 14 years into a devastating drought, it is on the verge of losing it all.

“The situation is as bad as you can imagine,” said Tim Barnett, a climate scientist at the Scripps Institution of Oceanography. “It’s just going to be screwed. And relatively quickly. Unless it can find a way to get more water from somewhere Las Vegas is out of business. Yet they’re still building, which is stupid.”

Things are not good…

Las Vegas gets just four inches of rain in a good year, and in the first four months of 2014 there was just 0.31 of an inch.

The Southern Nevada Water Authority, which has the task of keeping the city from running dry, has described the effects of the drought as “every bit as serious as a Hurricane Katrina or a Superstorm Sandy”.

However, Las Vegas still uses 219 gallons of water per person per day, one of the highest figures in the US. In San Francisco the figure is just 49 gallons.

But they have a plan…

Lake Mead’s water level is currently at 1,087ft above sea level. There are two pipes, known as “straws”, that take water from it to Las Vegas.

The first extracts water at an elevation of 1,050ft and is likely to be sucking at air, rather than water, soon. The second straw is at 1,000ft.

Lake Mead is expected to fall another 20ft towards that critical point by the end of this year. 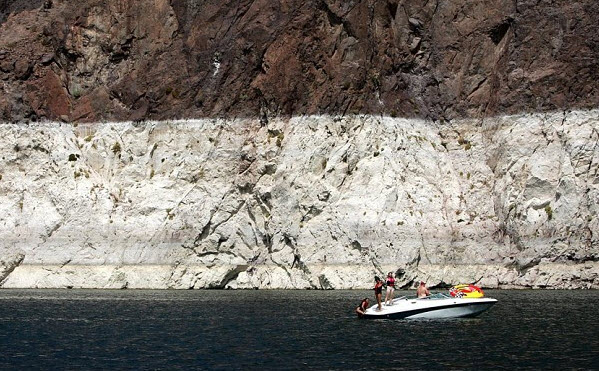 Beneath the ground a mammoth effort is already under way to complete a new, lower straw which will be able to draw the last of the water from the lake.

But it is a painfully slow process as a giant drill the size of two football pitches advances at a rate of one inch per day.

That rescue project is costing $817 million and is currently expected to be complete by late 2015, but it is not viewed as a long-term solution.

Las Vegas also wants to build a separate $15.5 billion pipeline that would pump 27 billion gallons of groundwater a year from an aquifer 260 miles away in rural Nevada.

But a judge has refused permission after environmentalists sued on the basis that it would adversely affect 5,500 acres of meadows, 33 miles of trout streams, and 130,000 acres of habitat used by sage grouse, mule deer, elk and pronghorn, an antelope-like creature that is endangered in the region. The court heard that 25 species of Great Basin springsnails would be pushed toward extinction.

But in the end, it’s a fals promise…

“It’s a really dumb-headed proposition. It would provide a false sense of security that there’s plenty of water and it would delay the inevitable decisions that have to be taken about water conservation and restricting growth.

“The drought is like a slow spreading cancer across the desert. It’s not like a tornado or a tsunami, bang. The effects are playing out over decades. And as the water situation becomes more dire we are going to start having to talk about the removal of people (from Las Vegas).”

Mr Mrowka cited Lake Las Vegas, a mega-resort where stars including Celine Dion live, as one of the “most egregious examples” of wasting water.

One proposal is for landlocked Nevada to pay billions of dollars to build solar-powered desalination plants in the Pacific off Mexico, taking Mexico’s share of Colorado River water in exchange.

But Mr Mrowka said: “The Colorado is essentially a dying river. Ultimately, Las Vegas and our civilisation in the American South West is going to disappear, like the Indians did before us.”

*  *  *
The bottom line – get there now, watch the fountains, drink the water, swim in the lake… (and sell your house)