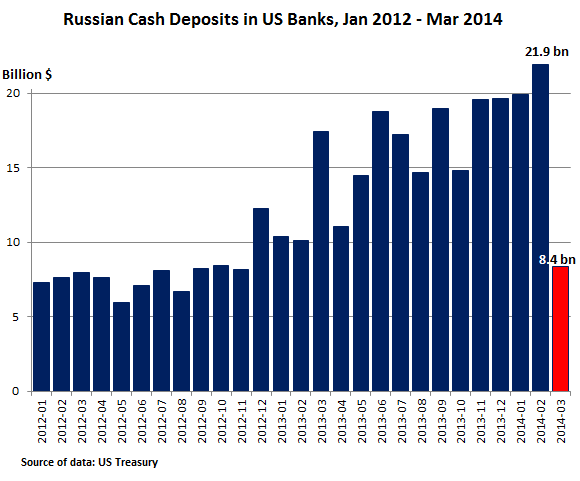 US Banks enjoyed more or less steadily climbing, or rather soaring, deposits by Russian institutions and individuals, having tripled in just two years to $21.6 billion by February, according to the US Treasury.

But from the Russian point of view, earning near-zero interest on their deposits in the US and losing money slowly to inflation must have seemed preferable to what they thought might happen to their money in Mother Russia. Money that isn’t nailed down has been fleeing Russia for years, even if it ends up in places like Cyprus where much of it sank into the cesspool of corruption that were the Cypriot banks, which finally collapsed and took that Russian money down with them. By comparison, the US must have seemed like a decent place to stash some liquid billions.

But in March, the Ukrainian debacle burst into the foreground with Russia’s annexation of Crimea, which wasn’t very well received in the West. The US and European governments rallied to the cause, and after vociferously clamoring for a sanction spiral, they actually imposed some sanctions, ineffectual or not, that included blacklisting some Russian oligarchs and their moolah.

So in March, without waiting for the sanction spiral to kick in, Russians yanked their moolah out of US banks. Deposits by Russians in US banks suddenly plunged from $21.6 billion to $8.4 billion. They yanked out 61% of their deposits in just one month! They’d learned their lesson in Cyprus the hard way: get your money out while you still can before it gets confiscated.

They certainly didn’t wait long to move the bulk of their money to other jurisdictions, those they believe perhaps erroneously to be beyond the reach of the long and sinewy arm of the US government.

Will Russians bring their deposits in US banks to zero? The Treasury will publish the April numbers in a few weeks, but zero seems unlikely because they’ll need some pocket money to operate in the US.

Is this Russian run on American banks going to cause the collapse of the US financial system? Or at least of a bank? Or at the very least make that bank shudder at its foundations? Um…. These $21.6 billion in deposits represent about 1% of the nearly $2 trillion in foreign non-negotiable deposits at US banks and an even more minuscule share of domestic deposits, some of which end up parked at the Fed as excess reserves. Heck, the Fed, in its infinite wisdom, printed $4 trillion over the last five years, so that measly $21.6 billion isn’t even a rounding error on that scale.

Not that these sanctions are working all that well. Despite moves by the West to isolate Russia, ExxonMobil, BP, Total, and other oil majors are doubling down in Russia; they just signed mega-contracts with state-owned Russian oil companies – sanctions be damned. Read…. Exxon, BP Defy Obama; Extend Partnership with Russia