Just in case the message was unclear when Russia held its “massive nuclear attack” drill last week, Putin – unlike Obama who has had a problem with clarifying over the past three months just what “costs” means – intends to hammer the point ten days from today when Ukraine is set to hold its presidential elections, when the Russian military has scheduled to hold yet another military drill, “Aviadarts 2014”, this time involving fighter jets (including as Su-27, Su-24, Su -25, Su-34 and MiG-29 jets and Mi-8 , Mi-24 , Mi-28, Ka-52 helicopters) and will see the participation of 71 crews of military aircraft and helicopters rehearsing the “countering of enemy air defenses, destruction of ground targets and carpet bombing enemy territory.” Somehow we think Ukraine (and NATO) will get this particular message loud and clear. 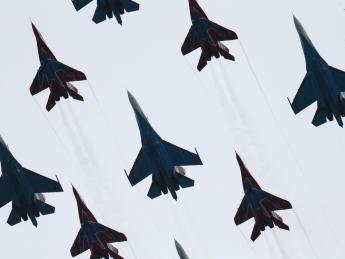 After last year’s success the Ministry has decided to introduce new types of military exercises in sports-adversarial format. On such demonstration competitions military not just work out procedures during the ” battle” , but also demonstrate commanders , journalists, and the audience that they can do it better than others. The first and second phases of the exercise “Aviadarts – 2014″ took place in the beginning of the year. According to RBC’s central apparatus of the Defense Ministry officer , the third stage of the exercise ” Aviadarts 2014 ” in Voronezh site ” Pogonovo ” will be held from 21 to 26 May. 71 fighter jet crews will participate, more than the number of planes and helicopters took part in the May 9 parade in Sevastopol. Based aircraft at the time of the competition will be in Ryazan, Lipetsk and Voronezh region.

During the exercises, formation flying pilots will work as part of couples and units piloting technique , problems of air navigation, combat use of the missile , bomb and gun arms against ground targets, as well as overcoming the simulated enemy air defense systems, said a source in the Defense Ministry .

Will be prepared for the competition The target unique situation , said RBC chief of the press service WEST Oleg Kochetkov first ground targets will be presented not only a wooden model , but a real aircraft and automotive armor . Military even transported by air to the transport helicopter Mi-26T two handicaps MiG- 25RB ( cargo weight – 15 tons ) .

“The active phase of the exercise, when the pilots will perform tasks directly in the air, including the use of military weapons , 24-25 May,” – said RBC group chief information security Air Force Colonel Igor Klimov. 21st , he said, will be opening on May 22-23 – the theoretical exams and delivery standards for physical training, and the 26th – closing with the award winners .

Deputy director of the Institute of Political and Military Analysis, Alexander Hramchihin did not rule out that the choice of date of the air drill was not random , but deliberately. ” It is possible that the Ministry of Defense were guided with the current military and political situation in Ukraine ,” – said the expert. ” May 9 we have demonstrated excellent West capabilities of our aircraft, which flew to the Crimea and back , apparently, decided to build on the success “, adds the director of the Center for Military Forecasting Anatoly Tsiganok.

In June and July will be held the final , fourth stage ” Aviadartsa ” said RBC’s group chief information security Air Force , Colonel Igor Klimov . It will take part foreign crews have already confirmed their participation , Belarus and Kazakhstan . Also was invited to the French side , but so far no response . In addition, in the final stage for the first time will participate aviadartsa and helicopter crews of Emergency Situations, Ministry of Internal Affairs and the Federal Security Service of Russia.

As for the yet unplanned fifth stage of the Avia-Darts, it may involve the landing of Mig-29s on the airport in Kiev. 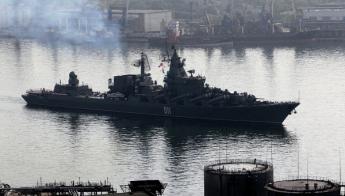 And just in case Russian military engagements were not enough, RIA also reported that a Russian Pacific Fleet squadron, led by the guided-missile cruiser Varyag, sailed from Vladivostok on Wednesday to participate in the Russia-China exercises Naval Interaction-2014, a military spokesman told RIA Novosti.

“Upon arrival, sailors will take part in the joint Russia-China exercises in the South China Sea,” he said.

Six Chinese ships and vessels will be involved in the drills, according to Martov.

The drills come as Russian President Vladimir Putin is due to arrive in Shanghai on an official visit May 20 to cement economic ties with China, including on energy, the Kremlin said.

This will be the two countries’ third such joint training exercise this year, aimed at strengthening the cooperation of their fleets and the ability to withstand various threats in open water.

Last year, the drills of the kind took place in July in the Sea of Japan and involved about 20 ships and vessels from both sides.

And now, once Kevin Henry returns from his Starbucks coffee break, it will be time to BTFD and/or BTFATH – after all the Fed is firmly in control of surreality, even if its excel models tend to #ref! out now and then.