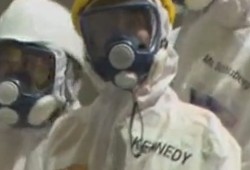 – CNN: “Problem from hell at Fukushima” — Tons of ‘highly radioactive’ liquid pouring out of Reactor 2 each day — Mysterious explosive bang “deep inside” — 3 areas at bottom may be ruptured — Caroline Kennedy at Plant: US will help with the leaks; 21 y/o son 3-hr Tepco tour (VIDEO) (ENENews, May 13, 2014):

CNN, May 13, 2014 (emphasis added): The push to plug the plumbing problem from hell at Fukushima Daiichi is about to get some help  […]  The reactor is believed to be leaking highly radioactive coolant water through a rupture in a donut-shaped chamber at the base of the reactor. Matt Cole, Kurion’s engineering director, said the arm will be used to inspect three areas around that chamber, known as the suppression pool, for suspected leaks. […] “They know there is a leak because of the balance of water, but they don’t know exactly where that leak is.” […] The damage to reactors 1 and 3 was dramatically visible […] what happened in No. 2 has largely remained a mystery […] operators reported hearing a bang from deep within the reactor, probably from another hydrogen explosion, and a spike in radiation levels. The unit’s turbine plant soon filled with water that was loaded with nuclear wastes, backing up through service tunnels and spilling into the neighboring Pacific […] dozens of gallons per hour [at least 2 metric tons/day] are escaping […]

AP, May 14, 2014: Caroline Kennedy, the U.S. ambassador to Japan, got a firsthand look Wednesday inside the Japanese nuclear plant […] for about three hours with her son, Jack Schlossberg. [It’s] plagued by leaks of radioactive water […] “It’s very hard to visualize and understand the complexity of the challenge when you just read about it, so this was a very informative visit,” Kennedy told reporters […] Schlossberg, who is 21, said, “I hope my peers, my generation in the United States will keep Fukushima in mind and understand that there is still work to be done and we can all do something to help.”

AFP, May 14, 2014: Kennedy said the US government would offer “our experience and capabilities, in particular, toward the near-term resolution of ongoing water contamination issues”.

NHK, May 14, 2014: Kennedy [stated] the US will help […] particularly to resolve the issue of radioactive wastewater.

Kennedy’s statement posted by TEPCO: “Daunting task in the cleanup and decommissioning of Fukushima Daiichi […] We are committed to providing support as long as it is necessary [and] will offer our experience and capabilities, in particular, toward the near term resolution of ongoing water contamination issues.

1 thought on “CNN: “Problem from hell at Fukushima” — Tons of ‘highly radioactive’ liquid pouring out of Reactor 2 each day — Mysterious explosive bang “deep inside” – 3 areas at bottom may be ruptured – Caroline Kennedy at Plant: US will help with the leaks; 21 y/o son 3-hr Tepco tour”