There was a humorous moment on the tape overnight when news hit that Germany was set to propose new (and improved) Geneva talks on Ukraine, according to German foreign minister Frank-Walter Steinmeier. According to Bloomberg, the aim of new Geneva talks would be to correct failure of parties to adhere to accords forged in first talks in city. “New Geneva talks would seek to boost OSCE presence in Ukraine to ensure compliance with April accord, with observers also acting as mediators in local conflicts.” Yes, utopia is great, and here’s to hoping that once, just once, Russia will ignore the fact that it has every geostrategic advantage in the ongoing conflict and will pull back. In the meantime, here is what happened overnight as fighting in the Ukraine civil war continued unabated, claiming more lives and dozens of injuries overnight. 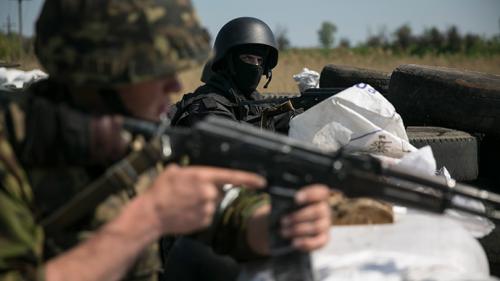 First from Interfax, which reported that:

And then this most recent update from Bloomberg:

Reports of gun battles are coming from eastern Ukraine again, where local militias are holding several cities against a force of Kiev loyalists. There are deaths among Ukraine troops, Interior Minister said.

There was a shooting on the outskirts of Slavyansk as pro-government troops raided a protester checkpoint, RIA Novosti reported on Monday.

The agency said at least 11 people were injured in the attack on the checkpoint.

Ukraine’s acting Interior Minister Arsen Avakov, who is near Slavyansk, confirmed that Kiev has re-launched its crackdown on the protesters. He said up to eight troops have been injured in the clashes so far

“The number of fatalities is being double-checked,” the minister said.

Bells tolled in churches around the city to alert residents of the incoming threat.

Intefax cites a militia member as saying that their forces pulled back into the city after fighting in the villages of Andreevka and Semyonovka near Slavyansk. The Security Service of Ukraine spokesperson Marina Ostapenko said the renewed operation’s aim is “to establish a security perimeter around the regions engulfed by violence.”

There is a report of a separate civilian death near Slavyansk. A man driving his car was shot by one of Kiev’s armored personnel carriers blocking the city, protester spokesman, Aleksandr Maltsev, told Itar-Tass.

Why the continued and escalating aggression as per this:

Kiev has intensified attacks on Slavyansk and other protester-held cities in eastern Ukraine since Friday morning. So far government troops have managed to blockade transport to and from Slavyansk, but haven’t made significant territorial gains, preferring hit and run tactics.

Simple: recall that it was the warmongering IMF which told Kiev that unless it regains the east, that no bailout money will be forthcoming. In other words, while one can blame the violent coup and overthrow of the elected president on the CIA, the ensuing civil war is as much the doing of US foreign service as it is of the financial globalists.