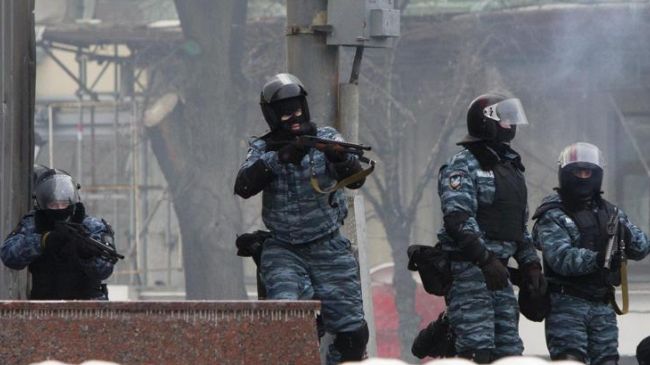 Email intercepts that included the original copies of anti-Semitic leaflets distributed in Eastern Ukraine have now been shown to be part of an elaborate false flag hoax to sabotage recent US-Russian talks.

The hoax, a “game theory warfare” operation, was meant to “sucker punch” both Russia and the US.  If those responsible, in this case the New York based ADL, were caught, and they have been, there would be no consequences.

The ADL is “untouchable.” When Secretary of State Kerry expressed his revulsion at Nazi leaflets demanding that Jews in Ukraine “register” with a non-existent government agency, little did he know he was the victim of an elaborate and highly dangerous false flag hoax.

Anonymous Ukraine, the group that intercepted emails outlining false flag terror attack plans made by the US Embassy in Kiev in March, has done it again. Emails intercepted between Washington DC offices tied to the Anti-Defamation League sent to neo-Nazi extremists in the Ukraine were the sources of the outrageous materials.

Earlier intercepted emails outlined plans for an attack on Melitopol Airport scheduled for March 10, 2014.  When those plans and the attached maps showing where explosives were to be planted were leaked, the planned attack failed to materialize.

Those emails showed direct ties between the US State Department and terrorist groups within the Ukrainian military. According to Anonymous, the current intercepted emails included several attachments, each different version of the anti-Semitic leaflets passed out in the pro-Russian Eastern Ukraine, particularly in the city on Donetsk.

Representatives of separatist groups reputed to have issued the edicts not only denied any involvement but pointed out that the documents themselves were photoshopped and included seals from the previous government and imaginary titles for offices that simply don’t exist.

“A letter urging the Jews of Donetsk to get registered, which the US Secretary of State cited in Geneva, is a fake, says a man whose signature appears on the communication.”

Following the four-side meeting on the Ukrainian crisis in Geneva on Wednesday, John Kerry lashed out at a letter that was allegedly sent to Jewish citizens in Ukraine’s eastern town of Donetsk, asking them to register and report all their property, or be stripped of citizenship and face expulsion.

“In year 2014, after all of the miles traveled in all the journey of history, this is not just intolerable, it’s grotesque… beyond unacceptable,’ he stated.”

There is a long-established tradition within the Zionist community of staging false flag “anti-Semitic” incidents in order to promote immigration to Israel or mobilize financial support.

According to the Ultra-Orthodox Jewish organization Neturie Karta, Mossad units bombed North African synagogues during the 1950s in a highly successful operation that “chased” Jews who had been living peacefully in North Africa for hundreds of years into Israel.

In the US and across Europe, anti-Semitic attacks, Swastikas on synagogues and “leaflet” campaigns have been tied to Jewish support groups.  These events were quickly followed up by fund raising campaigns, at times bringing in millions from corporations, many of which had supported Hitler during World War II.

NOT JUST A “HOAX”

This is far from the first time neo-Nazi hoaxes have been perpetrated to create a sympathetic environment for Zionist causes, particularly at times when Israel has been under criticism.

This time is different. There are no Jews in Eastern Ukraine that can be frightened as they are highly integrated into the Russian community there and enjoy broad support and trust.

“Olga Reznikova, 32, a Jewish resident of Donetsk, told Ynet she never experienced anti-Semitism in the city until she saw this leaflet.

“We don’t know if these notifications were distributed by pro-Russian activists or someone else, but it’s serious that it exists,” she said.
“The text reminds me of the fascists in 1941,” she said referring to the Nazis who occupied Ukraine during World War II.”

What is particularly noteworthy is that, unlike most other “spoofs” or “hoaxes” perpetrated by the ADL, this one has nothing to do with “raising Jewish consciousness.”  This one is about pushing the US and Russia into a world war.

The offending email attachments were sent to the Ukraine from the United States in a series of emails dated April 10 and 11, 2014, according to Anonymous. Within hours of their distribution to those leaving Passover services, copies were distributed to news media.

“Our good friends in the press,” as one email stated, had been briefed in advance with “talking points.” An unconfirmed source indicates these to have been included:

– Accusations of imaginary “historical anti-Semitism” to be made against the Eastern Ukrainian Russian population than the heavily neo-Nazi Western Ukraine (formerly Eastern Poland), a major recruiting ground for Nazi Germany during World War II
– Stories should be concocted to show that those responsible for anti-Semitism are under orders from President Putin
– Secretary of State Kerry’s reaction is to be purposefully mischaracterized, not only to blame Russia, but to do so in a threatening manner

American extremist group expert Laird Wilcox was a hound dog when it came to sniffing out the ADL’s long history of manipulating hate crime statistics and fabricating threats to get media headlines.

In Laird’s 1998 The Watchdogs he revealed that the annual ADL anti-Semitism statistics were compiled from polling its own mailing list. To make the process quick and easy in 1997, members could quickly check off the various abuse boxes to generate the needed statistics to falsely charge their fellow Americans with hate.

About the ADL Wilcox says, “Less well known are its espionage, disinformation and destabilization operations, not only against Neo-Nazis and Ku Klux Klansmen, but against leftist and progressive groups as well.”

The ADL’s espionage operations became a scandal in 1993 when there San Francisco operations were raided where thousands of Intel files were found not only on individuals about also groups, and where much or the information had been obtained illegally by having paid agents steal police records. At Veterans Today we call this a classic espionage operation.

What was Abe Foxman’s response to these critics at the time?  He went on the attack, calling them “anti-Semites, undemocratic, and anti-American bastards.” Southern heritage activist Jim W. Dean refers to Abe Foxman as “the hate crime energizer bunny, having perpetrated more hate crimes than anyone in America, and with total support of American media in the process, a dark stain on American media.

A longstanding tactic of the ADL has been to use smear tactics to vilify those unwilling to submit to bribery or blackmail. With the immense influence that the ADL and its sister organizations, AIPAC and the Mossad have on the media, no matter how thoroughly a false flag is debunked, as it will never be reported in the controlled press, the only thing the public will remember is the ADL/Foxman “smear.”

This is how it had been until the “meltdown” of the “mainstream media” and the wild growth in influence the independent press has enjoyed. What has made this more interesting, by far, has been the ability of organizations like the “Anonymous” groups along with national intelligence agencies to intercept embarrassing phone calls and emails.

Thus far, so much of what has gone so very wrong for the Ukraine and its people has originated from sources in the US and within the EU. Unheard of officials like “Ashton” or “Nuland” have become household names as their involvement in manipulating the Ukrainian coup has come to light.

Now we see what may well be the oldest card in the deck, passing out the proverbial “yellow star” as though it were a joke. It is not.