“Can anything be weirder than this. Mind Control at its most sinister.” 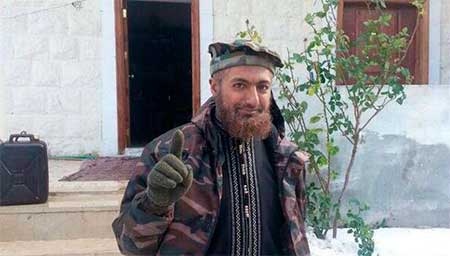 The Long War Journal reported in its post, “Former Guantanamo detainee killed while leading jihadist group in Syria,” that:

Ibrahim Bin Shakaran, a Moroccan who spent more than three years at the Guantanamo Bay detention facility before being released to Moroccan custody, has been killed while leading a jihadist group that fights Syrian government forces.

Bin Shakaran, who is also known as Abu Ahmad al Maghribi, Abu Ahmad al Muhajir, and Brahim Benchekroune, was “martyred, Insha’Allah, in battles for Hilltop # 45 in Latakia,” according to Kavkaz Center, a propaganda arm of the Islamic Caucasus Emirate.

Bin Shakaran led a jihadist group known as Sham al Islam, which is based in Latakia and is comprised primarily of fighters from Morocco, according to the Washington Institute for Near East Policy. Bin Shakaran created the group “not only to recruit fighters for the Syria war, but also to establish a jihadist organization within Morocco itself.”

Sham al Islam has been fighting alongside the al Qaeda’s Syrian branch, the Al Nusrah Front for the People of the Levant, as well as Ahrar al Sham and the Army of the Emigrants and Supporters in an ongoing offensive in the coastal province of Latakia.

Curiously absent from The Long War Journal’s report is any mention of how Bin Shakaran made it into northern Syria in the first place. Clearly this is because it would involve mentioning Turkey, a long-standing NATO member, with NATO being the organization that invaded and occupied Afghanistan, and whom Bin Shakaran had been fighting and ultimately fled from before being captured.

“The Long War Journal” itself is a project of the Neo-Con Foundation for the Defense of Democracies (FDD). The FDD has counted among its membership US politicians and policy makers such as current US Vice President Joseph Biden, William Kristol, Steve Forbes, Charles Krauthammer, Paula Dobriansky – many of whom were signatories of the now notorious Project for a New American Century and who had been the chief proponents of the so-called “War on Terror” and the two costly conflicts fought in its name – the war in Iraq and Afghanistan.

The detention center in Guantanamo is part of the “War on Terror’s” legacy, a continuous point of contention between the US government and rights activists, and clearly a failure in its alleged role of keeping dangerous terrorists off the battlefield.

A Pattern That Fits Conspiracy

What Bin Shakaran’s case appears to prove, is that Guantanamo, and the larger “anti-terror” network maintained by the United States is instead redirecting terrorists from NATO theaters of operation to conflict zones NATO is currently unable to directly intervene in. In Bin Shakaran’s case, that conflict zone is northern Syria. Bin Shakaran is joined by fellow US detainees like Abdel Hakim Belhadj, who was fighting NATO troops in Afghanistan, was briefly captured  in Malaysia and tortured by the CIA in Thailand, before then leading a NATO-backed assault on the Libyan government of Muammar Qaddafi in 2011.

Other members of Bin Shakaran’s militant group were also Guantanamo inmates. This includes Moroccan-born Mohammed al Alami who Reuters reported on in their article, “Former Guantanamo prisoner killed in Syria after joining Islamist brigade.” In it, Reuters stated:

A former prisoner at the Guantanamo Bay U.S. naval base died fighting for anti-government rebels in Syria, according to an Islamist opposition group which posted a video of his funeral on YouTube.

Alami, was the second known former Guantanamo detainee to be killed this year, Zelin added. A Saudi second-in-command of Al Qaeda in the Arabian Peninsula (AQAP) was killed in a U.S. drone attack in Yemen in July.

Throngs of terrorists, whose leaders are former inmates held in US custody, harbored, funded, and armed within NATO territory, and sent into Syria with NATO air and artillery cover fits the pattern of a conspiracy rather than a series of very unlikely coincidences.

It was in Pulitzer Prize-winning journalist Seymour Hersh’s 2007 article, “The Redirection: Is the Administration’s new policy benefiting our enemies in the war on terrorism?” that prophetically stated (emphasis added):

“To undermine Iran, which is predominantly Shiite, the Bush Administration has decided, in effect, to reconfigure its priorities in the Middle East. In Lebanon, the Administration has coöperated with Saudi Arabia’s government, which is Sunni, in clandestine operations that are intended to weaken Hezbollah, the Shiite organization that is backed by Iran. The U.S. has also taken part in clandestine operations aimed at Iran and its ally Syria. A by-product of these activities has been the bolstering of Sunni extremist groups that espouse a militant vision of Islam and are hostile to America and sympathetic to Al Qaeda.”

It is more clear than ever, with the West’s own warmongering policy makers admitting terrorists kept at their detention centers are now spearheading the fighting in a war of their own design, that the conspiracy described by Seymour Hersh in 2007 had been executed in earnest in 2011 and is continuing today.

The US and its axis partners are not waging a “War on Terror,” they are waging a “War of Terror.” While they will attempt to portray the appearance of Bin Shakaran and others in Syria as the unfortunate result of poorly planned policy, it was, by their own admission, all part of the plan, years before the so-called “Syrian Arab Spring” began.