“We all knew the real reason for the invasion of Afghanistan, but this gem is another case of karma.
Whilst invading Afghanistan & Iraq, the bullying gung-ho United States Military have been quietly burning the bridges which would have made the exit strategy cost effective.
Russia, Iran, Syria, Pakistan, China, Mongolia and a host of ‘stans’ have all been unwilling victims to drone attacks, sanctions or political interference/bullying/bribery.
Now they are trapped. The RT video news summary best explains it. But summarising, all those countries are now hostile to U.S. and thus forces SAC to go around the houses to escape with their 60,000 troops and $300Bn of warmongering, now antoquated and hammered equipment.
Bloody funny.”

And just like in Iraq we were and still are ‘brilliantly succeeding’ ….

At a Midtown hotel ballroom, the vice president declared that the U.S. was “succeeding brilliantly” in Iraq and assailed Democrats on taxes, gas prices and national security.
Published: May 30, 2008
Source: The New York Times 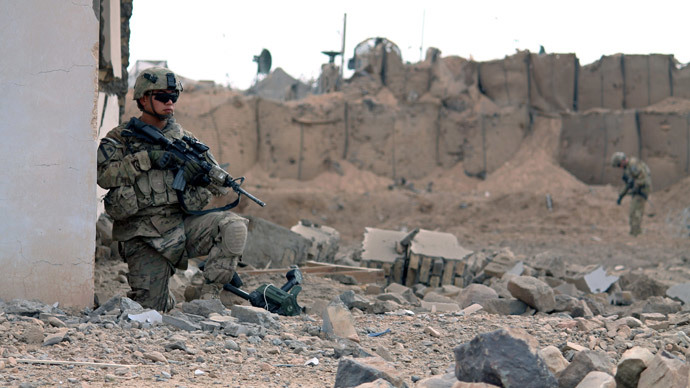 Ranked as America’s most challenging military action since WWII, the US is faced with the task of transporting millions of pieces of military assets out of Afghanistan as possible exit routes – including through Russia – are blocked.

The US military is learning the hard way from its lengthy experience in Afghanistan that it is far easier to get bogged down in a foreign adventure than it is to extricate oneself from it. Landlocked, isolated and surrounded on all sides by potential enemies, Washington’s withdrawal of its troops and equipment from the Central Asian country by the end of 2014 is beset with numerous obstacles.

One US military planner compared the moving operation to the minute logistics of transporting a mail shipment.

“The FedEx model, if you will,” Tony Shaffer, a senior fellow at the London Centre for Policy Research, told RT. “You gotta know where it’s at, what it’s doing, where it’s moving, and what’s going to happen when it gets somewhere.”

Indeed, the sheer amount of troops and equipment that needs to be brought home is staggering: in addition to 30,000 soldiers, the Pentagon must oversee the return of 48,000 vehicles, and a total of 81.5 million items, valued at some $33 billion.

The main problem confronting Pentagon planners is choosing the best exit route, an option that has substantially decreased thanks in large part to Washington’s failure on the diplomatic front, for example, with Russia over the ongoing political crisis gripping Ukraine.

One of the most reliable methods of moving military equipment in and out of Afghanistan has been via the Northern Distribution Network, 3,000 miles of winding railroad that passes through Central Asia into Kazakhstan, Russia and through parts of northern Europe to the sea.

In fact, 75 percent of military supplies into Afghanistan were delivered by this slow but reliable route.

However, recent violent protests in the Ukrainian capital of Kiev, which led to the overthrow of the government and Crimea voting in a referendum to become part of the Russian Federation – an event that Washington has attempted to label as a “Russian military invasion” – have put a severe strain on Russia-US relations.

One result of the diplomatic breakdown is that Russia now refuses to permit NATO military cargoes from passing through its territory.

“This is not a military issue,” Brig. Gen. Dave Reist (Retd.) told RT. “This is a diplomatic issue that sets the framework for the withdrawal from several countries.”

Another exit corridor that may be disrupted due to bilateral tensions is through Pakistan.

“The best, fastest, easiest and cheapest way to get out is to drive south from Afghanistan and through Pakistan to the major port of Karachi, on the Indian Ocean,” Doug McGreger, a retired colonel with the US Army, told RT reporter Meghan Lopez.

However, Washington’s heedless and occasionally reckless determination to eliminate terrorists in the region at all costs, even at the expense of Pakistani lives, it seems, has placed a heavy toll on the Islamabad-Washington partnership, a relationship that was never on solid footing from the beginning.

One of the worst incidences occurred on November 26, 2011, when two NATO fighter jets crossed the border into Pakistan from the Afghan border and attacked two border patrol checkpoints, killing 24 Pakistani soldiers and wounding scores more. The incident sparked fierce protests in the country and forced Pakistan to close the southern route to US troops for seven months in retaliation.

At the same time, the Pentagon’s relentless use of drone attacks on suspected terrorist hideouts along the Pakistani border, and occasionally inside Pakistan proper, may have produced some victories on the terrorist front, but have done nothing on the diplomatic front. Thus it should come as no surprise that many Pakistanis are staunchly opposed to an endless convoy of US military vehicles cutting through their country.

Another option for the Pentagon is to airlift its troops and equipment out of Afghanistan, but this method is fraught with cost concerns.

According to the former head of the US Transportation Command, General Duncan McNabb, military airlifts are 10 times more expensive per pound than transport over land. At the same time, this method of transport is not without its share of risks.

Last April, a Boeing 747 departing from Bagram air field, the largest US military base in Afghanistan, crashed moments after takeoff. Experts believe the heavy vehicles on board the aircraft broke free from their restraints and caused the aircraft to go out of control due to load shifting.

But ultimately the primary cause for Washington losing exit options out of its costliest war in decades is simply a breakdown in relations with those countries it depends on most to fulfill its objectives.

Even the question of the United States leaving behind a residual military force, complicated by past US behavior in the course of the 13-year military operation, to help the Afghan forces maintain peace and security has come up against problems.

Outgoing President Hamid Karzai said he would leave the decision of leaving US troops (and some extra weapons) behind in Afghanistan.