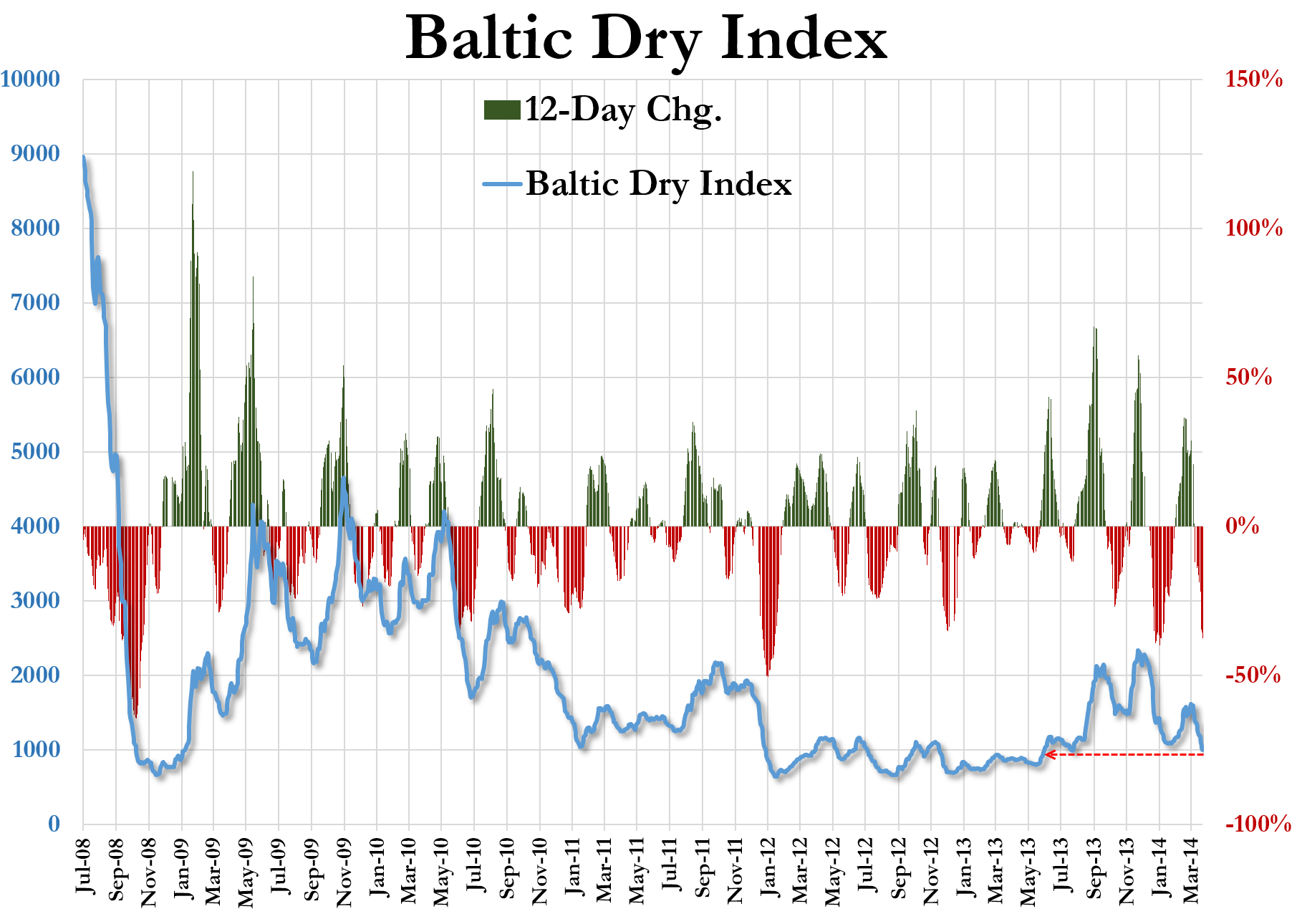 The silence is deafening still about the ongoing collapse in the Baltic Dry Index among mainstream media types (as it just might challenge the hope/hype that growth is coming back). At the dismal level of 1002, BDIY is at 8-month lows and has fallen 14 days in a row… but now it is having a real world impact. As Sea News reports, Korean shipping companies are failing to place orders for large vessels and anxiety over the future is forcing some local companies to dispose of their assets despite the relatively low shipbuilding costs as of late.

And As Sea News reports,

Korean shipping companies are failing to place orders for large vessels. Under the circumstances, the domestic shipping industry is expected to get more and more enervated, because major shipbuilding contracts are an effective means for tiding over a slump in the sector. Some of the local companies are even disposing of their assets despite the relatively low shipbuilding costs as of late.

It seems Korea is particularly hard hit since its government won’t subsidize the losing proposition like Denmark and China is willing to…Industry insiders attribute the current situation to the local shipping finance system. An increasing number of governments, such as the Danish and Chinese governments, have provided large-scale funds for the industry in the form of direct loan and payment guarantees since the outbreak of the recent global financial crisis. CMA-CGM, for instance, returned as the world’s third-largest shipping company thanks to US$150 million from the French government.

In contrast, the Korean government is providing little shipping finance support. “The establishment of the Shipping Finance Corporation has been foundered and the foundation of the Shipping Guarantee Fund, one of its alternatives, is showing little progress for now,” said Senior Analyst Song Min-joon at the Korea Investors Service.

“Our competitors are likely to be steps ahead from late this year, when the vessels will begin to be delivered one after another,” the Korea Shipowners Associations added, continuing, “Then, Korea’s shipping industry will be facing even greater difficulties, unless there are some measures to turn the tables.”

We are sure the fact that the industry has been overbuilt – based on Keynesian-policy-inspired mal-investment and mispriced signals from global markets – will be used as the excuse for the collapsing price of shiiping dry bulk… but that argument s entirely circular and fallacious as it merely reinfoces the unintended consequences of the oh so visible hand in the world’s markets and leaves more zombie entities clogging up any potential economic growth that is possible in a world of peak debt.